There are a few places in the world where Land Rovers are intrinsically tied into the landscape, creating a sense of place in which the Best4x4xFar is a key element. This week, we’re taking a look at four of the most “Rover-y” places in the world. 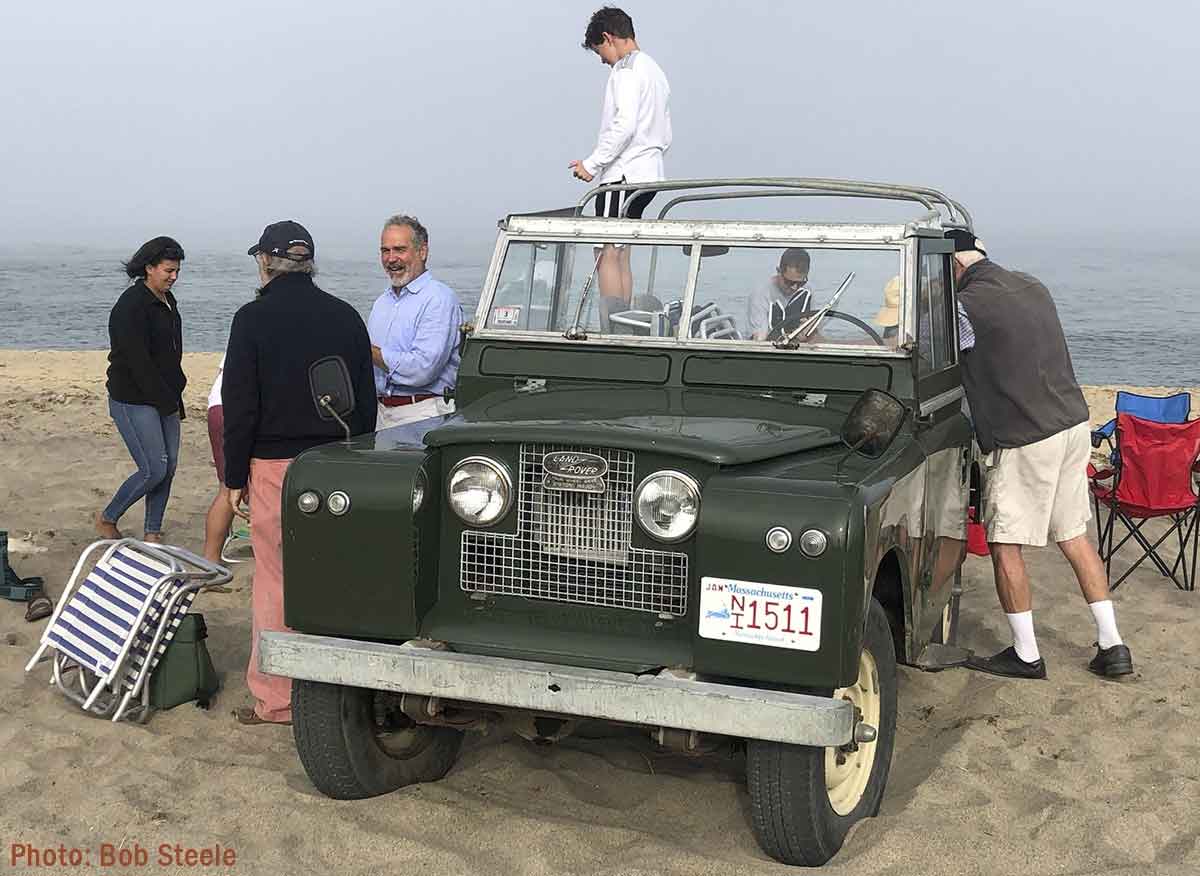 Nantucket, twenty-two miles off of Cape Cod, Massachusetts, may be America’s most Rover-y place. In particular, it’s the national hotspot for North American Specification Defenders, where the soft top models have long been an island favorite.

The biggest factor in Nantucket's Rover-yness is the wealth of the island's seasonal visitors. The average home price has climbed to $4.43 million, and most of them are summer residences. Many of the huge houses also have a Land Rover in the garage. Many of these vehicles live on the island permanently, sometimes getting shipped to the mainland for repairs, but mostly spending the winters tucked into garages.

Nantucket also has a huge number of off-road vehicle-accessible beaches, and driving out to the Great Point Lighthouse or the Coatue spit for the day is a time-honored tradition. A current year’s beach permit slapped on your bumpers is a status symbol off-island; a decades-long string of overlapped permits on an old bumper is a status symbol on-island. A run on the beach doubles as a car show of great 4x4s, and if you're a geek for off-roaders overall and not just Land Rovers, you'll also get more than your fair share of Jeeps, Toyotas, Broncos, and more niche vehicles.

Though the original Defender is the King of Nantucket, Land Rovers of all sorts make their home here. The new Defender is also staking its place quickly. At just 47.8 square miles, Nantucket may well have the most Land Rovers per square mile of anywhere in the world. 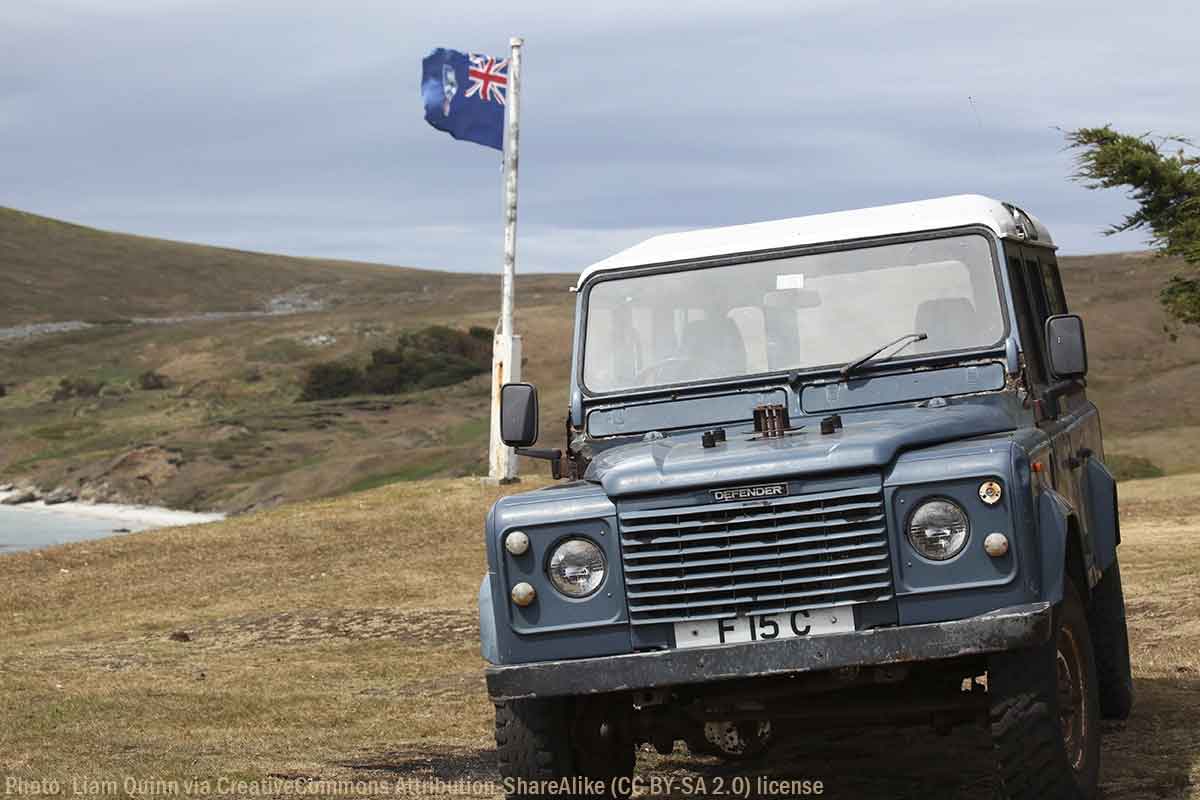 Ask most people if they’ve heard of the Falkland Islands, and they can maybe dig memories of the Falklands War in 1982 out of a recess of their memory. These islands off the tip of South America have a contentious history, with long-standing sovereignty disputes between the United Kingdom (who have populated them since 1833) and Argentina (who claim them based on a series of events and treaties in the 18th century). These disputes came to a tee in 1982 when Argentine forces invaded and took over the islands. Britain retaliated by sending a task force of ships to retake them, using everything at hand from aircraft carriers to ocean liners-turned-troopships Canberra and Queen Elizabeth 2. But for one of the most contentious pieces of territory in the world, day-to-day life on the Falklands is pretty quiet -- a few thousand farmers and military personnel going about their daily lives.

The Falklands are remote and rugged, and to get around them you need a proper 4x4. With their long British heritage and a supply chain that comes mostly from the UK, Land Rovers have become dominant. It’s difficult to go very far in the capital city of Stanley without seeing some Land Rover going the other way. Old Defenders are still workhorses on the outer islands of “Camp,” some cobbled together out of multiple vehicles to keep going. There are even some extremely rare Land Rovers on the islands, including a Roadless Forest Rover, one of only nine in the world with massive tractor-like tires and chopped bodywork.

The Land Rover connection to the Falklands is so strong that it’s resulted in a book, Land Rovers of the Falkland Islands, which documents the most iconic vehicles on the islands. Authors Jean and Denis Crankshaw spent months photographing the Land Rovers, coming down from Canada to capture the trucks in the natural landscape of the islands. In addition to being a hub of Land Rover spotting, the archipelago attracts wildlife photographers from around the world to photograph the many species of penguins that run around the island. Most of these photographers end up in some kind of Land Rover for their wildlife tours. 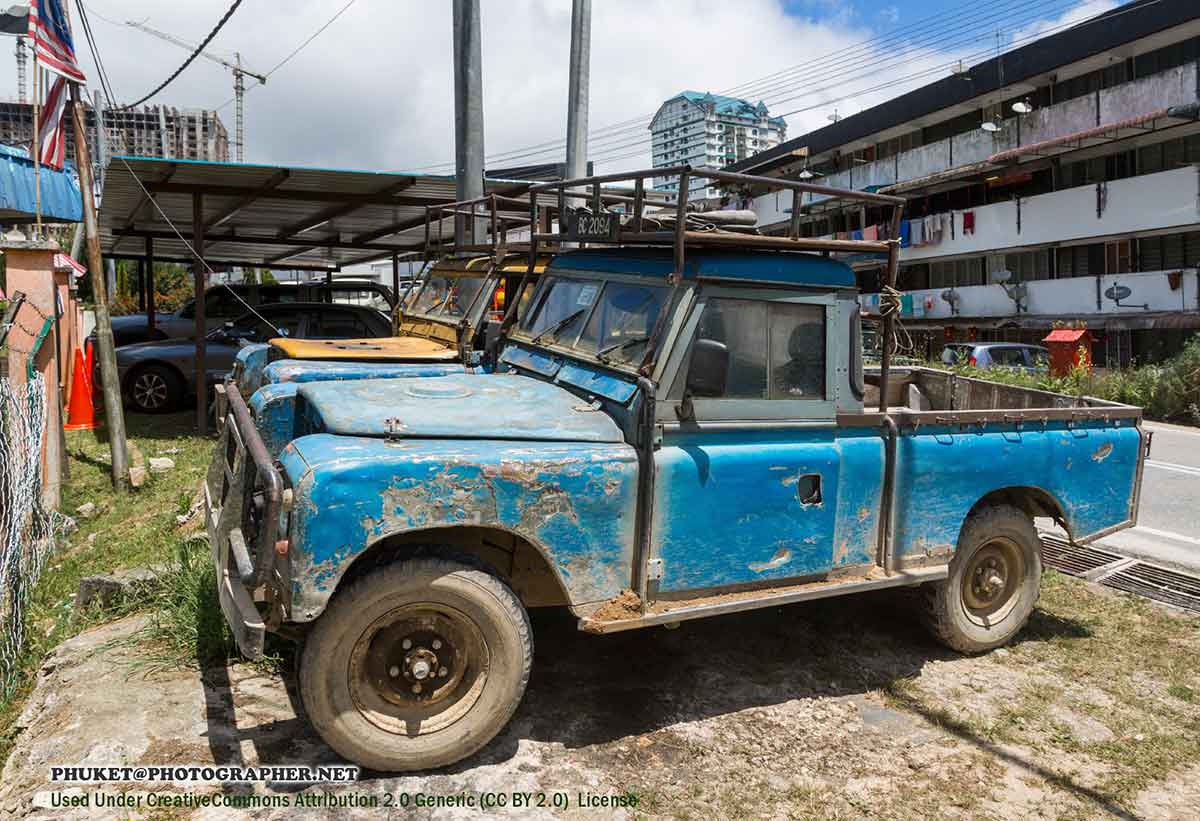 Malaysia gained its independence from Britain in 1957, less than a decade after the Land Rover went on sale. Their separation from the British Empire didn’t separate them from the Land Rover, though. In fact, until the 2000s, the Malaysian government explicitly recommended buying Land Rovers for government and military vehicles.

Many of these government-owned vehicles ended up at auction after they were done with their service, and they became very popular with farmers as used off-road work vehicles. Many of these ended up in the Cameron Highlands, a rural region in the north of peninsular Malaysia with a large tea production industry.

Most of the Land Rovers here have a white box painted on the door with the letters “CH” on them. That signifies that the vehicle pays a special tax rate as an agricultural vehicle used only in the Cameron Highlands; if it’s seen outside of the region, a hefty tax can be levied on the owner. It’s estimated there are a few thousand Land Rovers in the region, and they’re enough of the identity of the place that they’re listed in the Cameron Highlands’ Wikipedia article and are a selling point for tourists.

While there are tons of Land Rovers, Malaysians don’t put a huge emphasis on originality – in fact, they’re huge fans of engineering engine conversions. Nissan, Toyota, and Daihatsu engines are common swaps, though plenty of original motors are still in service, too. Once the Land Rovers have lived their second life, they go onto “Land Rover heaven,” with the region hosting some of the largest Land Rover breaking yards in the world. Some have hundreds of vehicles lined up, from Series I to Defender. Many Land Rovers also end their days parked up and abandoned on the side of the road, tires flat and paint flaking off, as a part of the landscape of the region.

The era of the Land Rover in the Cameron Highlands won’t last forever, as time marches on and classical Land Rover production ended in 2016, but with a vibrant local community in the Land Rover Owners Club of Malaysia, it could be a rewarding vacation for the Land Rover superfan – and you may well get to take a CH-emblazoned souvenir home! 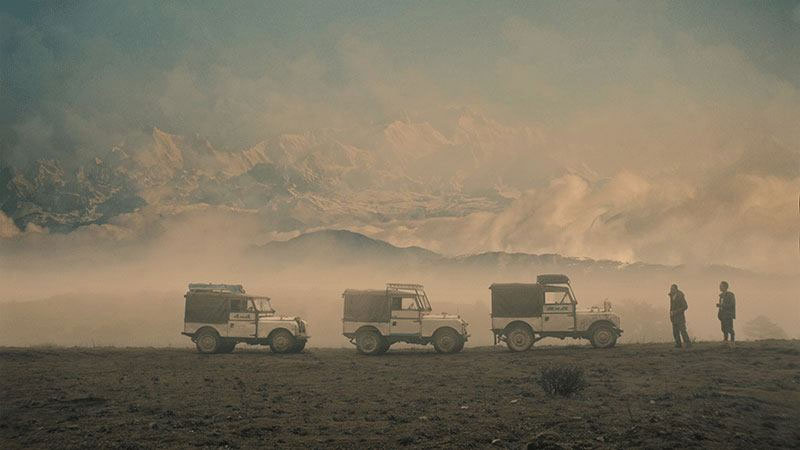 High up in the Himalayas, over 11,000 feet in the heavens, a fleet of forty-odd Land Rovers ply the steep road up the mountain at Sandakphu, just as they have since the 1950s. This is where old Land Rovers – really old, like Series I old – are still an intrinsic part of the landscape, and have been for decades.

Up until the 2000s, Land Rovers were seen all over Darjeeling and these nearby hilly areas of India, but changing regulations and aging vehicles mean that the fleet was more or less reduced to the fleet that drives up Sandakphu. In 2004, the owners formed the Singalila Land Rover Owners’ Welfare Association, which coordinates tourist trips up the mountain and advocates for the owners and their unique pieces of automotive heritage.

Back in 2018, there were some rumblings from the local government about removing the Land Rovers from the Sandakphu run, considering the run to be too unsafe for the decades-old Landies. (That said, many are old only in aesthetic, and similar to the Cameron Highlands, many have been converted to more modern Japanese motors.) There are recent reports from travelers online of taking Land Rovers up the mountain, though, so it seems that they have survived both legislation and the pandemic for now.

The Land Rovers of Manebhanjyang are such a part of the landscape that in 2018, Land Rover sent a film crew to document their owners and the landscape of the place. But this Rover-y place may not last forever, and perhaps of all the places here, it’s the most endangered. But with a long Rover heritage, the majesty of the Himalayas, and the stunning hill town of Darjeeling nearby with its quaint Toy Train, it’s worth a Rover geek’s vacation to see it before it’s gone.

Do you know another Rover-y place that you think deserves recognition? Drop us a line -- we might do a Part 2!