This year is the 30th anniversary of the North American Specification (NAS) Defender 110, launched in 1992 for the 1993 model year. To pay tribute, Land Rover has built 500 new Defender 110s in a tribute specification, right down to numbered plaque.

The NAS 110 was the Defender’s first venture to the United States and Canada, and it was a bit of a test for the higher-production NAS 90 that would follow in 1994. There were 525 vehicles – 500 for the United States, and 25 for Canada. (The differences were minimal for the Canadian market, and related to legal requirements; many Canadian 110s ended up south of the border.) It took a year to build them all in a special assembly area at Solihull. They were all equipped with 3.9-liter Rover V8s, five-speed manual transmissions, a full external roll cage, large basket-style roof rack, and special interior trim.

Until the oldest 1983 Defenders came under the 25-year import rule in 2008, these were effectively the only legal Defenders in the United States. (There was a very small number legally imported between 1983 and 1988, under the old grey market laws.) Even though the market has been flooded with legally-imported Defenders in the past 14 years, the NAS 110 still stands as the desired object above all others, and clean examples trade for close to $200,000.

In honor of the NAS 110, Land Rover has a new Defender 110 30th Anniversary Edition, a limited run of 500 vehicles built in a tribute specification.

The vehicles are all based on the Defender 110 P300 S, with a four-cylinder two-liter motor. (Is it a V8? No. Does it have more than a hundred more horsepower than the 1993 NAS 110’s 3.9-liter V8? Yes.) They’re all Fuji White, the closest available hue to 1993’s Alpine White. They all come with 18” steel wheels, in tribute to the NAS 110’s iconic deep-dish ANR1534 rims. There’s no roll cage – the new Defender is so ridiculously stiff and strong it doesn’t need one for safety.

Inside, Ebony grained leather seats don’t quite match the NAS 110’s thatched grey cloth, but they’re somewhat close. The cross-car beam that forms the backing to the new Defender’s dashboard is white, bearing some resemblance to the light grey panel in the NAS 110 that concealed its model-specific air conditioning system.

The new 110 comes with an accessory set to mimic the old one. There’s a roof rack – a modern, flat deck instead of the old basket. It’s accessed by the new Defender’s optional side-mounted ladder, instead of the old rear-mounted version. There are side steps, like the original had. Wheel arch extensions mimic the old Defender’s standard black arches. (The Defender’s axles were wider than Series axles, but the bodywork was the same width, thus the black eyebrows on every vehicle.) Mud flaps finish the package, though the modern versions aren’t quite big flappy 90s ones.

The piece de resistance, though, is the badge on the back – a modern version of the iconic NAS Defender badge, which was on every vehicle from the 1993 Defender 110 to the 1997 Defender 90. Designed to look like a Series station wagon’s badge, these are the hallmark of a NAS truck, emblazoned with the sequence number that many owners identify their trucks by. There will be just 500 new Defender 110 30th Anniversary Editions, each with a numbered plaque.

The 30th Anniversary Edition is available now, priced from $75,000. It’s a few thousand more than if you specced out an identical Defender 110 S with all the accessories, but it’s also the only way to get that old-school serial-numbered Land Rover badge on a new Defender. 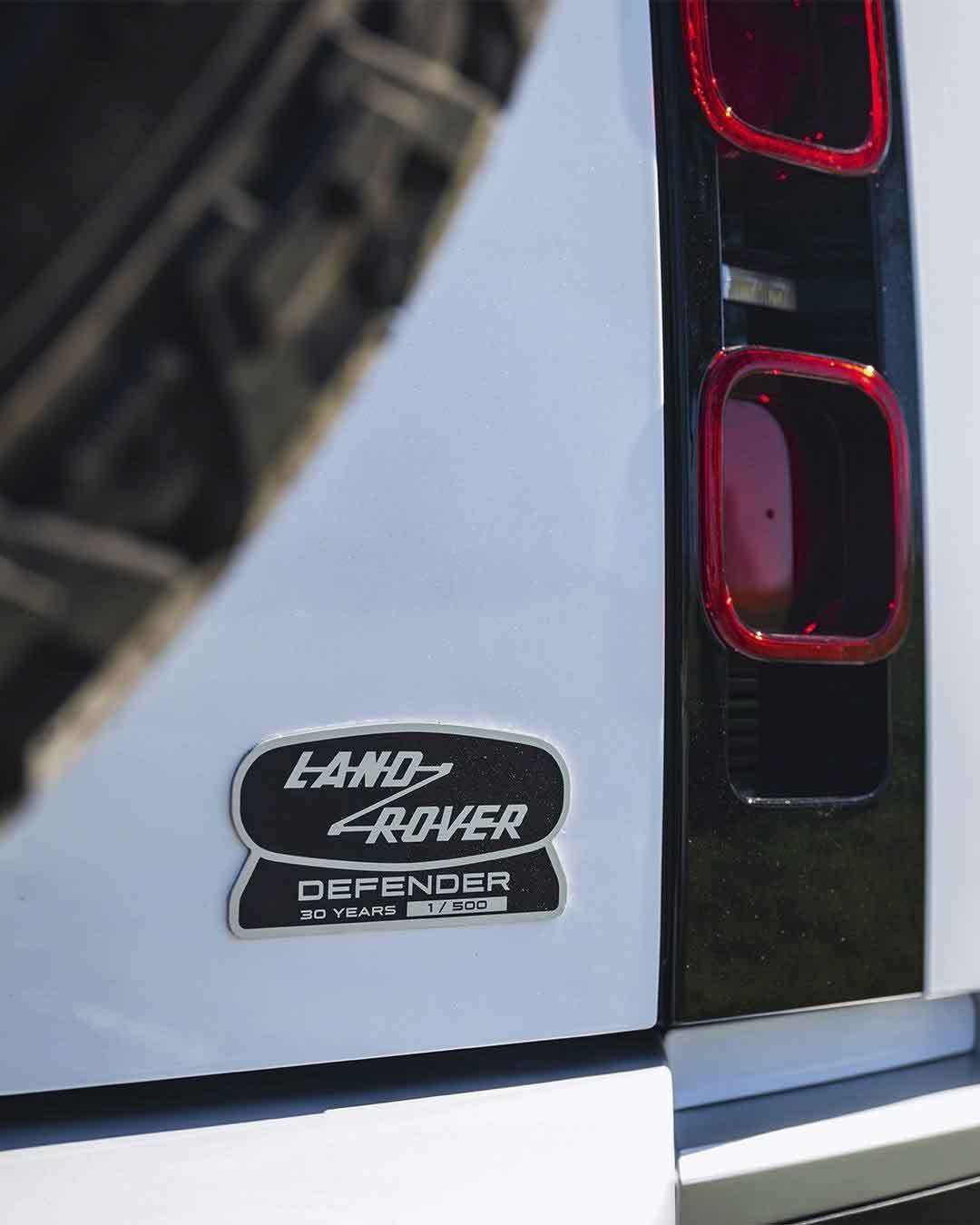