"Just stick me in the back of a Land Rover and drive me to Windsor."

That's what the late Prince Philip, Duke of Edinburgh, reportedly told The Queen to do when he died. About as down-to-earth as you can get as a royal, it seemed the sensible way of dealing with things. With the Duke's passing and funeral, it's now been revealed that that's exactly what will happen with his casket, transporting him to his funeral on April 17th on the back of a custom-built Defender 130. But Prince Philip's life with Land Rovers is a long one, stretching back to the early days of the company.

Land Rovers have always been heavily associated with the Royal Family, and Prince Philip is no different. He married The Queen in November 1947, just months before the Land Rover was launched in April 1948. The Queen ascended to the throne in February 1952, early in Series I production, and Land-Rovers quickly made themselves a part of royal life, in work and play.

A Royal Review Series I, designed for waving from the back of, was part of her 1953 Commonwealth tour, with Philip by her side. 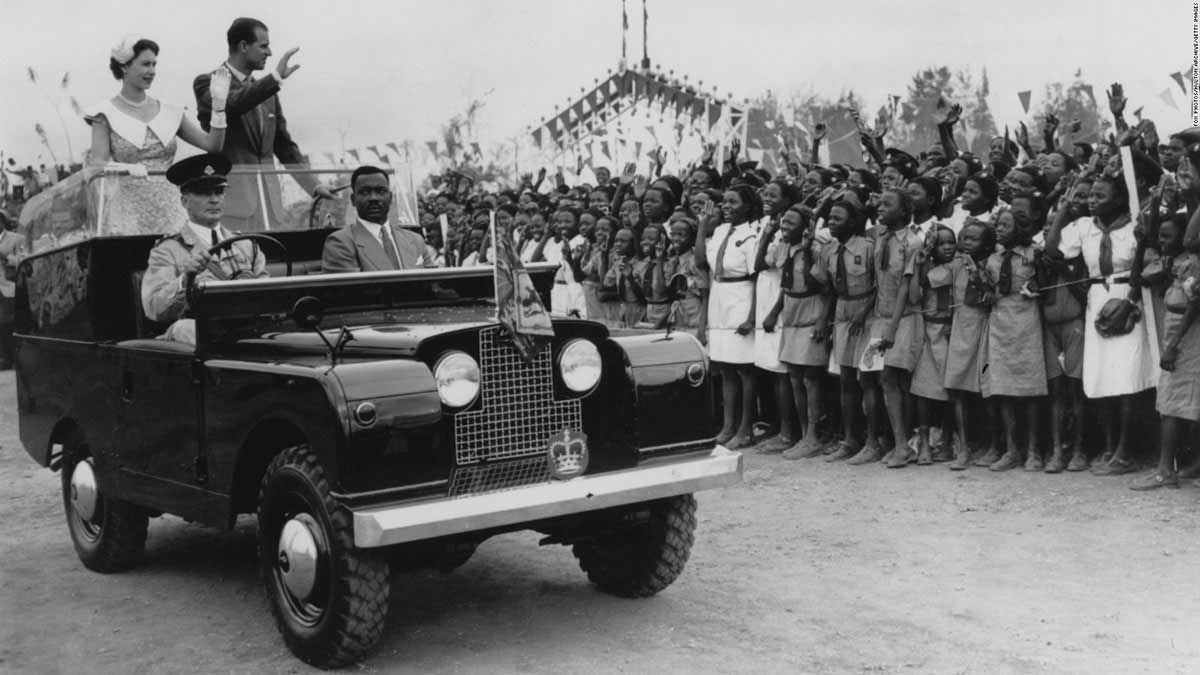 Land Rover has made a point of keeping Royals in Land Rovers ever since King George VI was gifted the hundredth vehicle in 1948. By the 1960s, Philip was often seen in Series II models, taking them to polo matches and on hunts. One of the most famous pictures of him with a Land Rover, in fact, is him sitting on a Series II 109" station wagon, The Queen leaning against the wing. 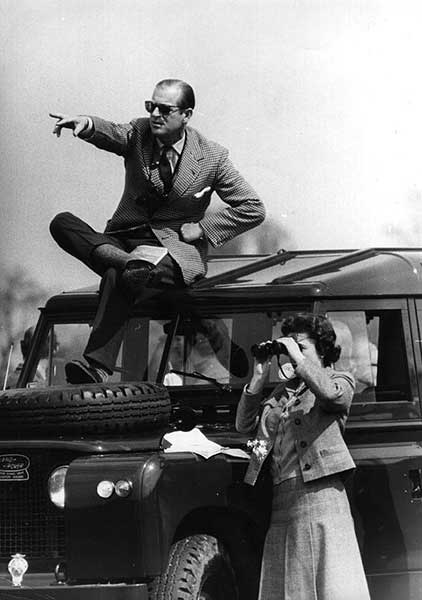 They also did duty as family vehicles as The Queen and The Duke of Edinburgh raised their four children. 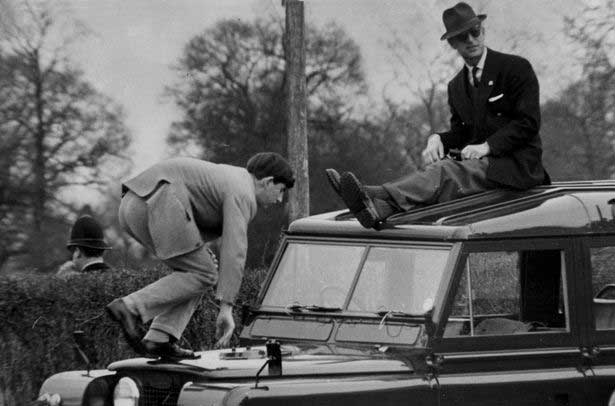 When the Range Rover came along in 1970, the extra comfort and higher status made it a perfect fit for the royal family. They went through a number of them, and throughout the 1970s and 1980s, a Range Rover Classic was never far from a royal. Philip had several models, including this mid-1980s four door. 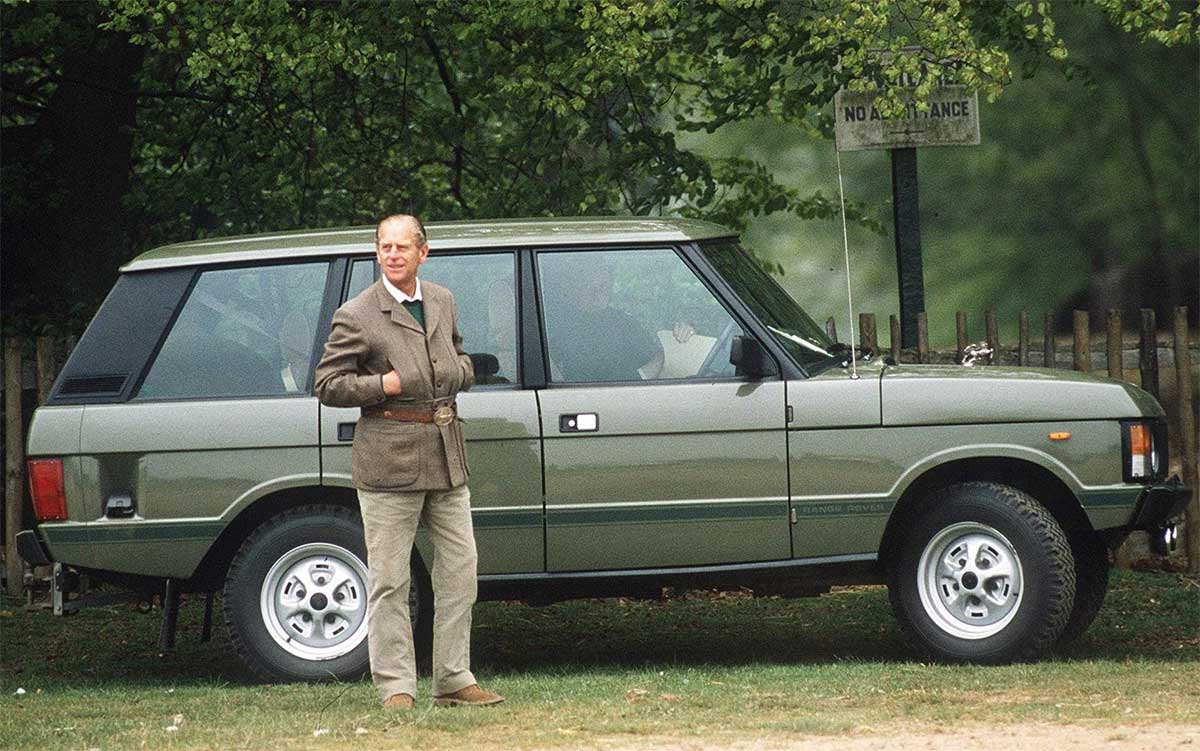 By the 1990s, the Land Rover lineup expanded to four models, with the mid-range Discovery and Freelander. Prince Philip was, in fact, a big fan of both, and even with his standing in the Royal Family he was often more likely to drive a cheaper Land Rover than a Range Rover. 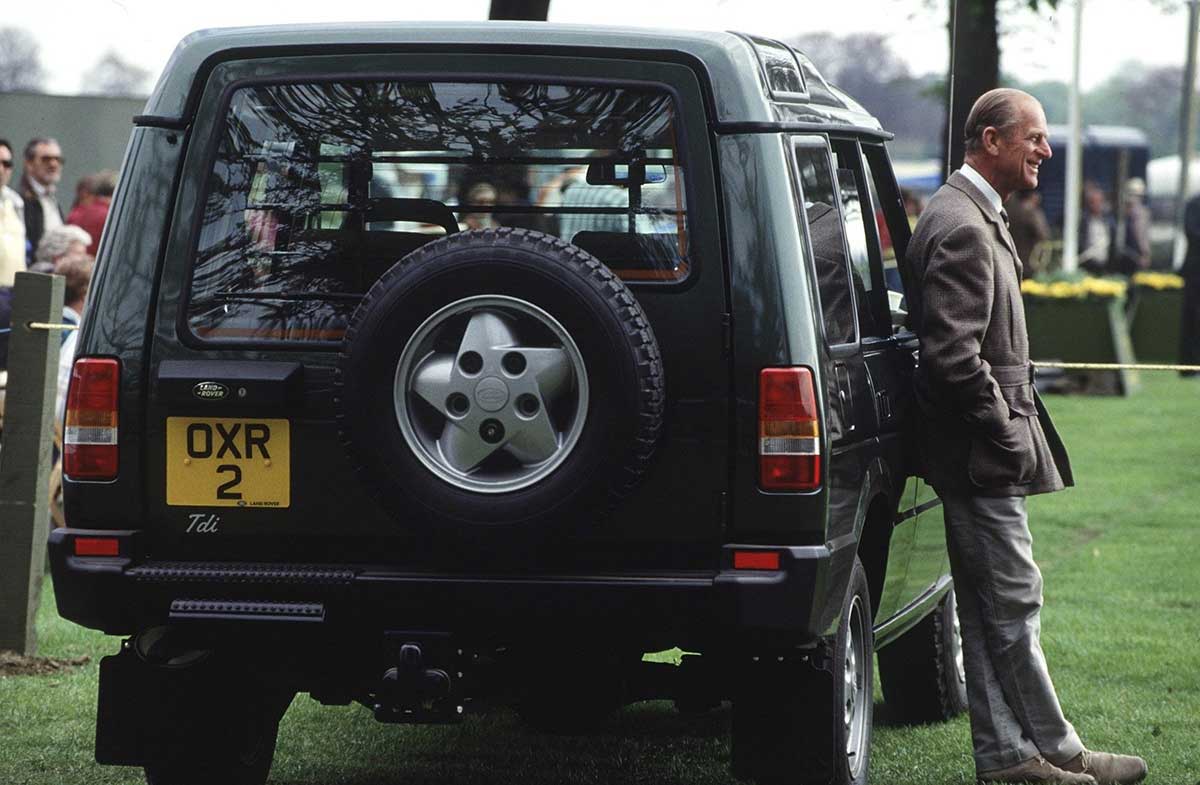 Even in his nineties, Philip made headlines with Land Rovers. One was good, one was not so good. In 2016, the Obamas visited The Queen and The Duke at Windsor Castle during a state visit. Marine One touched down on the protected castle grounds, and instead of the President’s usual Cadillac limo, the Royals were waiting with a blue Range Rover. President Obama joined Philip in the front seat while Michelle and The Queen took up the backseat, and the 94-year-old Duke drove the Leader of the Free World 400 yards to lunch in the castle. 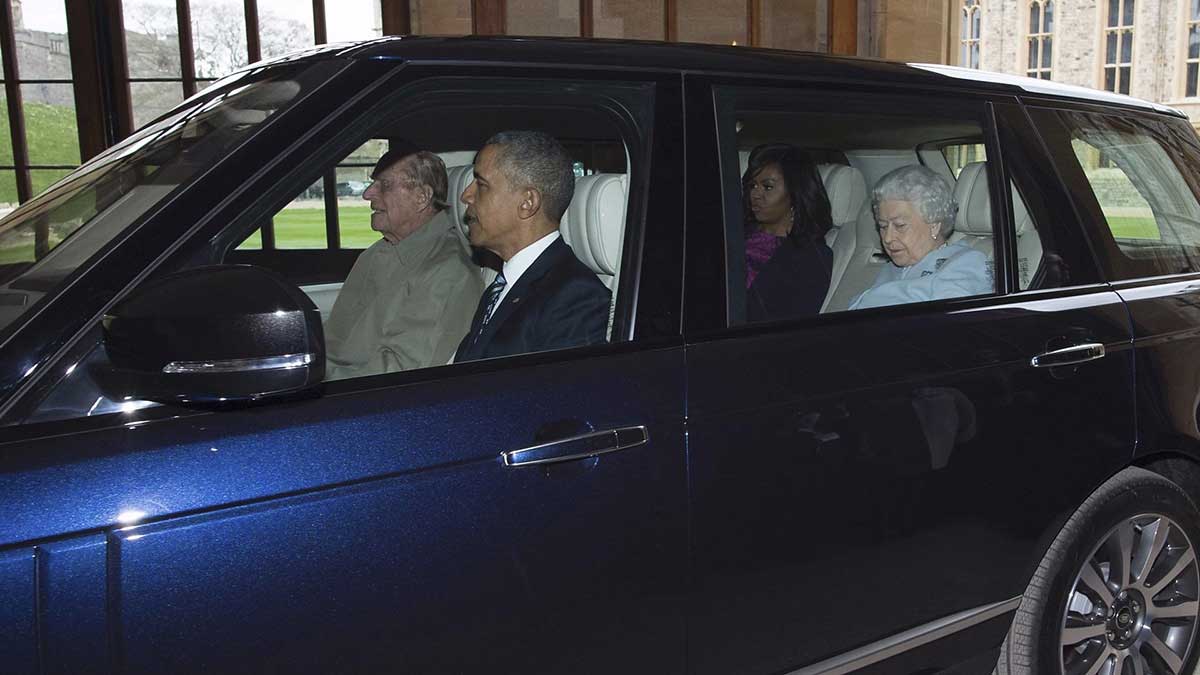 Three years later, Philip’s driving skills would be considerably less praised. In February 2019, he made headlines for clipping a Kia with his Freelander 2 (what we called an LR2) and flipping it over. The Kia was carrying two women and a baby, and after being hit by the Land Rover, was smoking. After being seen the next day in another identical Freelander 2 (which aroused the curiosity of Land Rover nerds, since they hadn’t been made in five years), he gave up his license a month later. 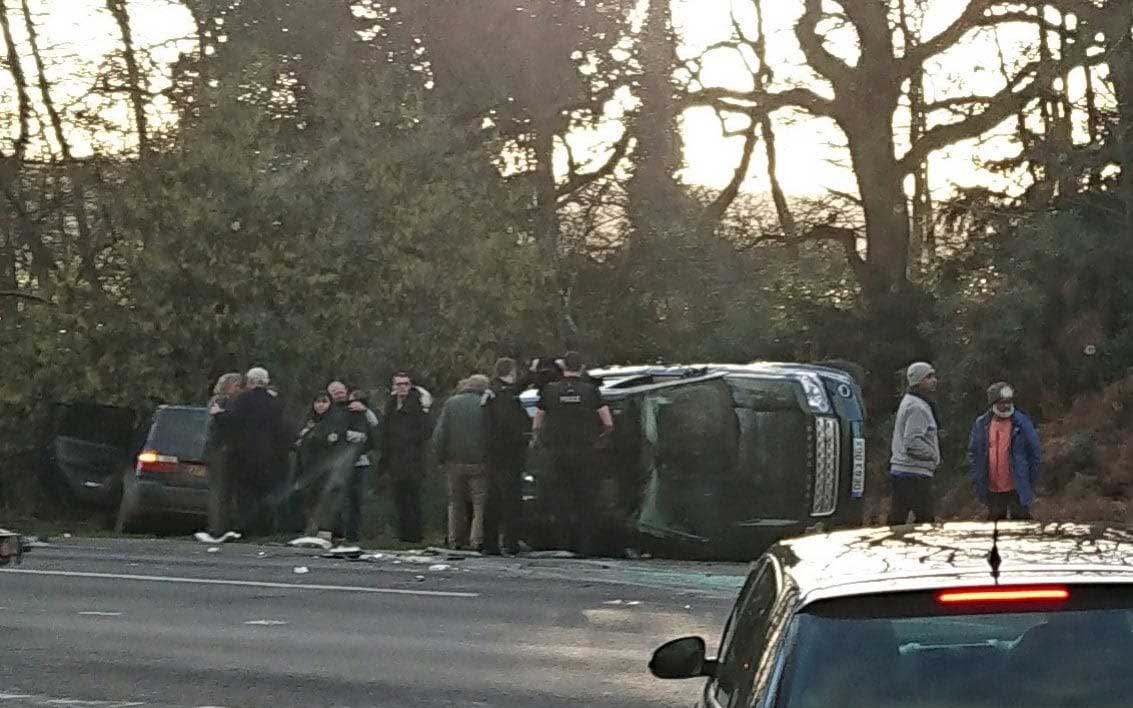 But his time with Land Rovers isn’t over until he’s laid to rest on Saturday, April 17th. Instead of the traditional gun carriage, he will be driven from Windsor Castle to St. George's Chapel on the back of a custom-built Defender 130. The truck is designed explicitly to carry his casket, with a flat back and special mounts. It was commissioned in the 2000s, supposedly by Foley Specialist Vehicles, a famous British Defender rebuilder. It's been tweaked several times over the years, including getting a coat of military green paint instead of the original civilian green. The truck will be driven by soldiers from the Royal Electrical and Mechanical Engineers, of which the Duke was Colonel-in-Chief.

Though a custom-built truck might seem extravagant for the eight-minute drive from Windsor Castle to the Chapel, the original plans were for a funeral at Westminster in London, followed by a 23-mile drive to Windsor for the burial. Due to the Coronavirus restrictions in Britain, the funeral is now limited to the government cap of 30 people, and will be held in private (but also televised) at Windsor, where the Duke died. 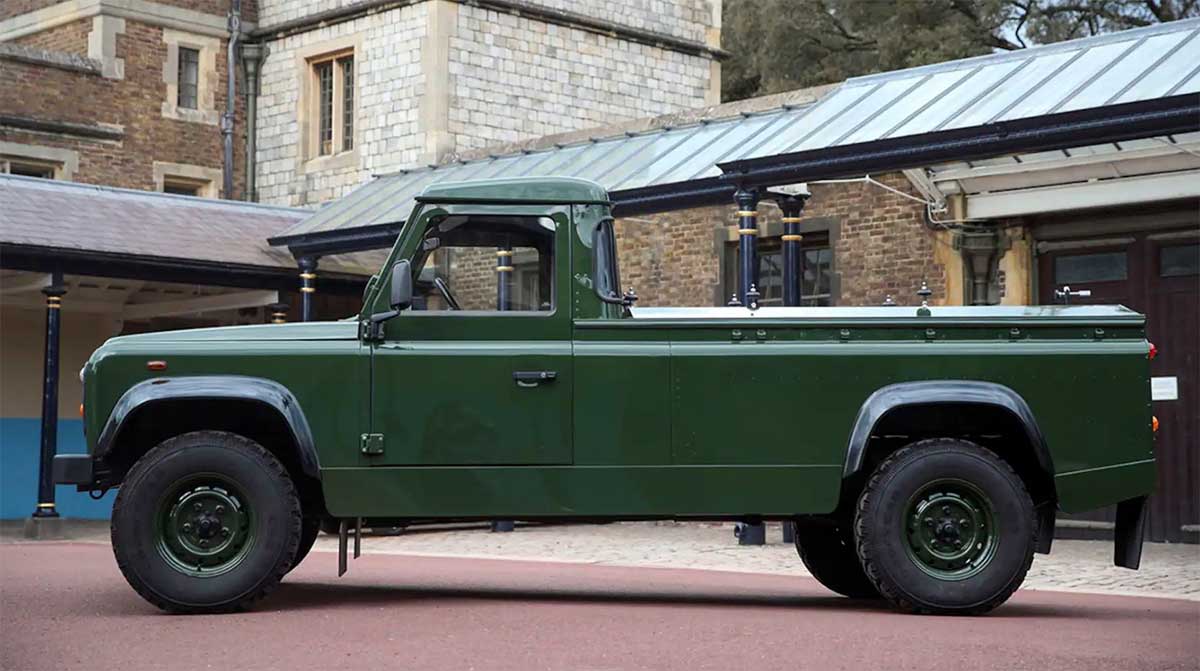 Philip’s affection for Land Rovers made them one of the relatively few British companies to carry his Royal Warrant, and thus all the available Royal Warrants. A Royal Warrant is a mark which those who supply high-level Royals can display in their marketing, allowing them to benefit from the prestige of serving the monarch. Land Rover has used these heavily in their marketing over the years, printing them on the back covers of brochures and owners manuals, on the bottoms of advertisements, and mounting replicas in dealerships and auto show stands. Their pride is for good reason – only 14 companies hold all three active warrants. Until The Queen Mother’s Warrants expired after her death in 2002, they were one of even fewer companies to have the full set. Jaguar Land Rover stands along such quintessentially British brands as Hunter boots, Purdey firearms, and the iconic London tailors Gieves & Hawkes in holding the full set of warrants. 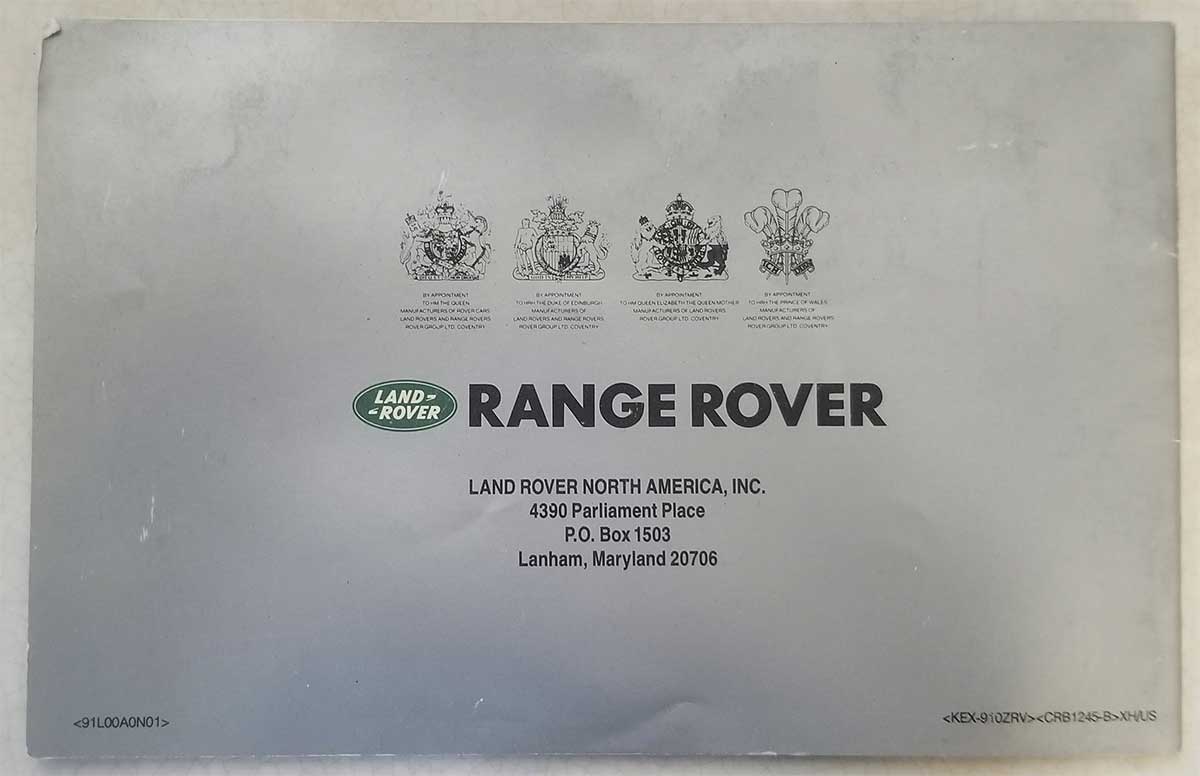 The loss of The Duke of Edinburgh is a huge one for Britain, and more so for the Royal Family, and The Queen who had been married for almost 74 years. Not only has the nation lost its Consort, it's also lost one of the biggest fans of one of it's most iconic automotive exports.