There’s not many places on the East Coast where you can disappear into the bush on dirt roads for hours on end, like you can in the West. One of the few exceptions is the North Maine Woods, a collection of private land in northern Maine that produces timber used in the paper industry. With a daily entrance fee, you can access hundreds of miles of logging dirt roads leading all the way to the Canadian border.

After years of thinking about going to, but not actually going to, the North Maine Woods, I decided that it was time to get myself up there to give my new-to-me 2005 LR3 a test. It seemed like the perfect way to put some off-road miles on my new truck, and get away for the 4th of July.

I left Friday afternoon and picked my friend Tom Forker up in central Massachusetts. I was already a few thousand miles into LR3 ownership, but it still amazed me how well the truck behaved on the highway compared to my Range Rover Classics and Discovery 1 that I had been daily driving since 2007.

With over a hundred more horsepower than the venerable Rover V8, I had ample reserves for passing and going up hills. It is significantly quieter, more well-behaved on the highway, and still has a massive greenhouse to see the surrounding scenery and traffic. The trunk is also far larger than the D1 (which has a smaller footprint than a new Toyota Corolla), and I was amazed that I could get all my things in with the rear seat backs still upright. 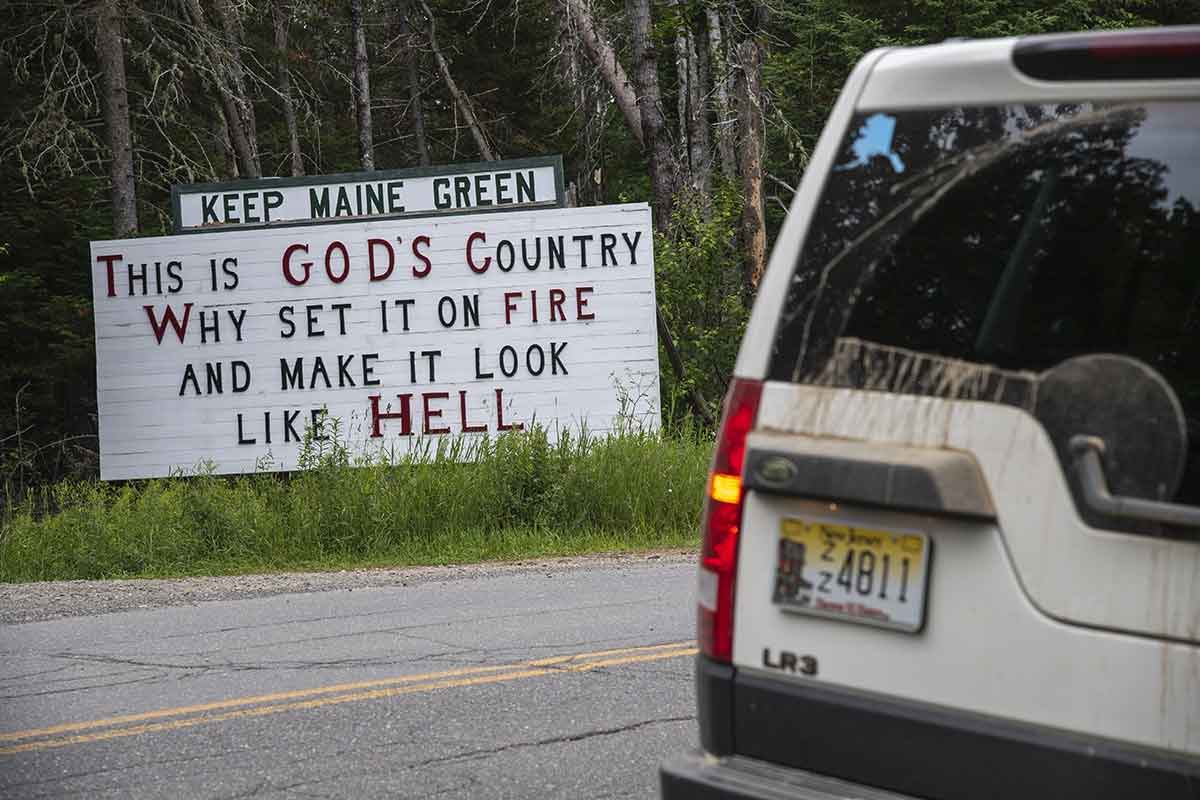 We spent the first night camping at the Sebasticook Millennium Green, known to Land Rover owners as the home of the Maine Winter Romp, then headed up to Greenville, the southern gateway to the Woods. You have to enter at one of the checkpoints run by North Maine Woods, Inc., the organization that manages the land for the landowners. After filling out a lengthy registration form and paying a daily fee of about $30 a person a day, we were in.

Our main goal was the abandoned locomotives of the Eagle Lake and West Branch Railroad, the last remains of a short line railroad used from 1927 to 1933 to transport pulpwood between the north-flowing Allagash River and east-flowing Penobscot River, so they could continue to the mills. The trains were left behind when the rail operation ended, not being worth recovering from deep in the woods. And deep in the woods they are, almost as far north as Quebec City above the upper reaches of Baxter State Park.

This journey required driving over a hundred miles on dirt roads, putting the LR3’s independent air suspension to the test. None of the roads were particularly difficult, and while a Land Rover was perfectly suited to the terrain, there were plenty of lesser SUVs and pickups up there, as well as some adventure vans. The main roads in the North Maine Woods are designed first and foremost for logging trucks and pulpwood infrastructure to move around, so they are generally wide and somewhat flat. That said, we hit plenty of potholes and washboard, much like a heavily-used National Forest road out west. The LR3 soaked it all up, adjusting each corner's air spring as needed to skirt over the imperfections and keep Tom and I comfortable.

After a day getting lost in a warren of logging trails, we camped for the night on Lake Umbazookus, just south of the locomotives and the original end point of the railroad as the pulpwood was dumped into the Penobscot River basin. We set up camp on the shore and took in the sunset over the lake, made dinner in the Jetboil, then set up our chairs on the shore to take in the night sky and quiet of the woods, interrupted only by the camp next door playing the playlist from a prom in 1988 on a Bluetooth speaker. 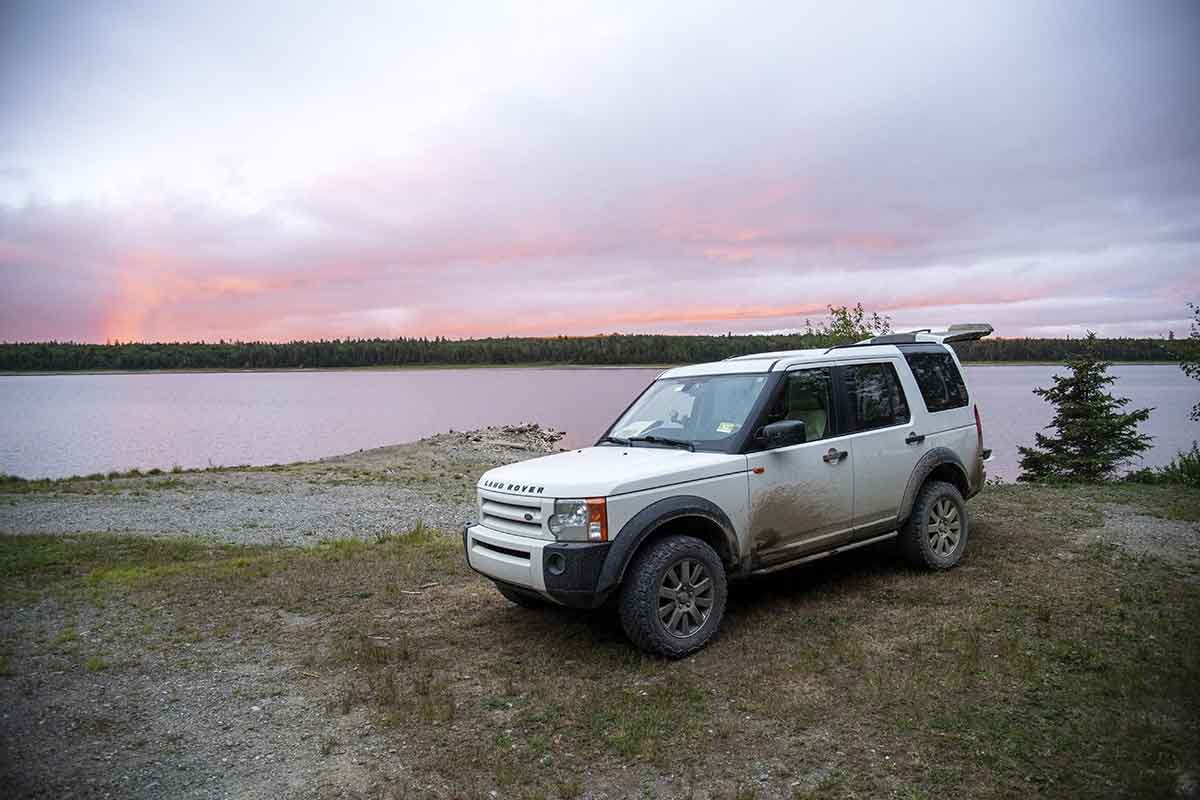 The next day, we headed up to the locomotives, parking the LR3 in the area that was built since they became “Internet famous.” It was about a mile’s hike into the site, with the detritus of an abandoned railroad lining the trail along the way, including spare boilers and the rotting remains of the log carrying cars. We spent an hour exploring the locos, this being the main point of our trip after all. The harsh midday sun did photographs no favors, but the temperatures and Eagle Lake views made up for it.

From here there was nowhere to go but home. Well…there was a lot more to explore up here, and I was already planning my “North Maine Woods Part 2” trip for the future. Just driving around and getting lost was fun. But work beckoned, and we were a good distance from home up here. We were also slightly concerned about fuel range. It turned out to be a non-issue due to the LR3’s significant capacity and better economy compared to older Rovers, but there is nowhere to refill up here once you’ve run out. We needed to get to Millinocket and fill up and head south. 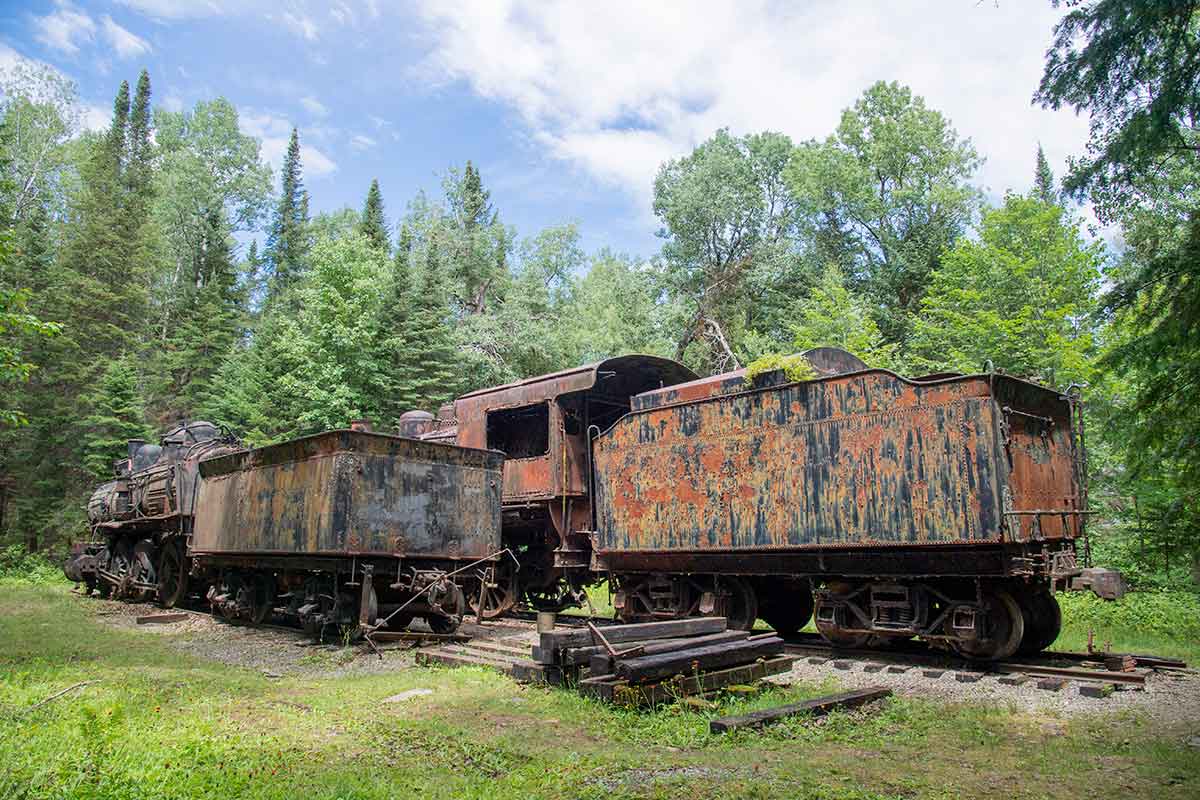 One more stop at the Sebasticook Millennium Green on the way home and it was time to spend the fifth driving home. The LR3 was now slathered in mud, and as we cruised through Portland and York in vain attempts to see the Portland Head and Nubble Lighthouses on an extremely busy holiday weekend, we jacked it up into off-road mode crawling through traffic for added aesthetic and ego-boosting effect.

We drove back to Tom's house through the back roads of New Hampshire and Massachusetts, and then I hit the Interstate home. The LR3 carved the roads through New York City heading back to New Jersey without an argument, soaking up the rough pavement and using its ample power reserves to slot into traffic and crisscross chaotic intersections getting to the George Washington Bridge. I was home by midnight, un-fatigued.

I still love my old 1990s Land Rovers, and they had been, until I got this, the only thing I'd ever daily driven. I'm not selling my Disco 1 or my Range Rover Classic any time soon. But in 2021, it's such a quantum leap in comfort and performance to add an LR3 to the fleet, even a 16-year-old example like mine. The gains in power, space, ride comfort, and dependability make it a totally different beast to drive and own. With values on the classic solid-axled Land Rovers climbing across the board, the LR3 looks even more appealing as a massively capable and livable alternative to an older Discovery or Range Rover. To that I say...get them while they're still cheap, because its' a magnificent all-rounder 4x4 and destined to be a future classic.