It’s a rare thing that a new Range Rover arrives, and the fifth new generation in fifty-one years is a big deal. The 2023 Range Rover launched on October 26, and while some aspects of it aren’t a massive departure from the prior generation, other things are a giant leap forward. There are lots of developments, from the first-ever seven-seater Range Rover to the model’s first-ever four-wheel-steering system and the first-ever electric Range Rover.

The fifth-generation Rangie is built on Land Rover’s new Modular Longitudinal Architecture (MLA), the first Land Rover model to adopt this platform. The MLA platform can accept all kinds of powertrains, from the powerful BMW 4.4-liter turbo V8 to plug-in hybrids to a fully-electric powertrain. There are two engine options at launch: the aforementioned V8 and the 3.0-liter straight-six Ingenium Mild Hybrid (MHEV). In 2023, a plug-in hybrid will hit the market, followed by a full-electric version for 2024.

At first glance, especially from the front or side profile, the new Rangie looks very much like the old Rangie. The shape has staying power and potential in the market – and it will stay around for a while. With the pace of Range Rover launches through history, the truck will have more or less the same shape from 2013 into the 2030s. 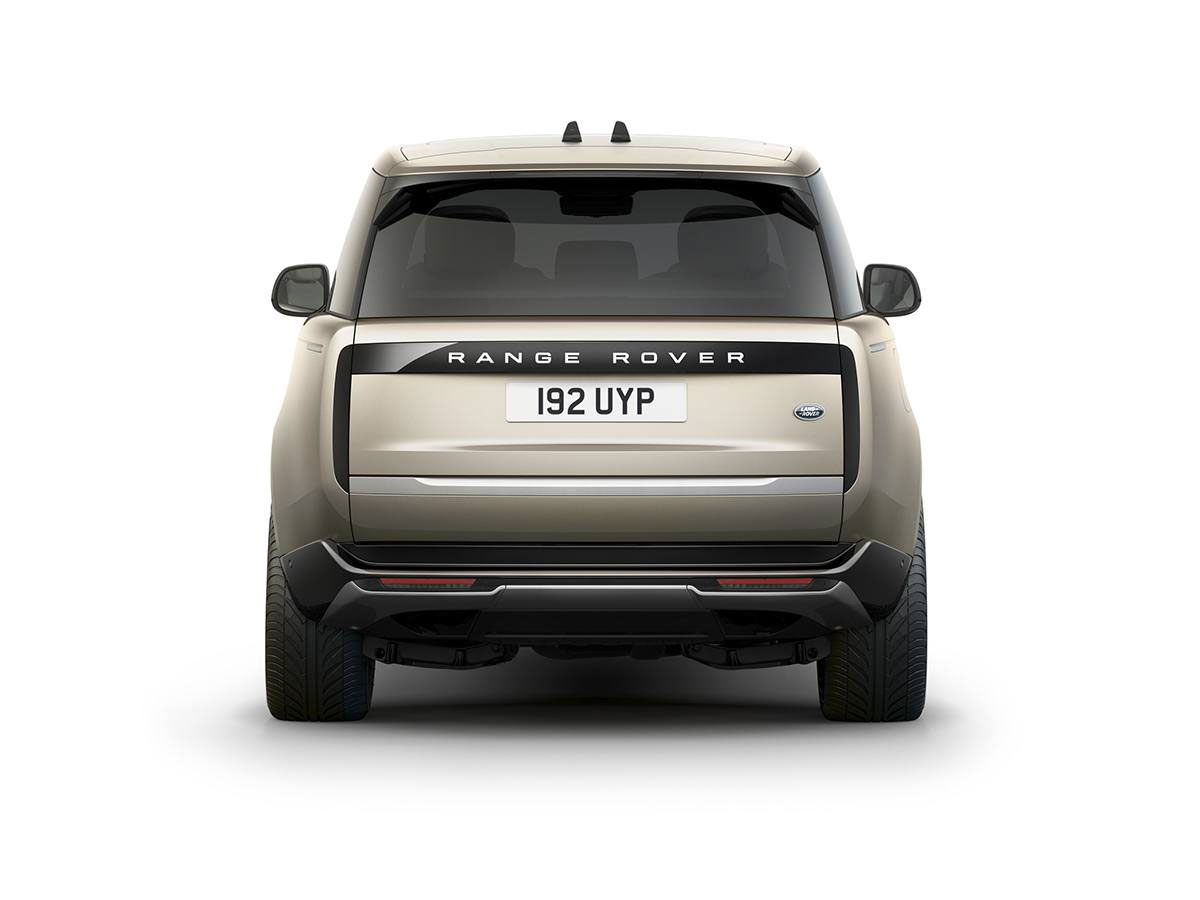 The significant change in the new model is in the rear, where the traditional taillights are gone, replaced by a smoked black loop around the top and sides of the lower tailgate. Parts of this loop act as the lights, with other parts acting as design elements.

Overall, the theme of the design is minimalism and simplicity. And indeed, though old-school Land Rover lovers may not be fond of how the modern vehicles have deviated from their traditional forms, they have become the most restrained luxury car designs on the market. As every other automaker has stretched their trademark grille across the front of their fleet, Land Rover has made do with a subtle grille and strong semblance of a front bumper. The sides are slabs of gently curving metal – leave your flame-rolled creases in Germany, please.

Underneath, there are some significant suspension changes. All Range Rovers will come with four-wheel steering, which reduces the turning circle to the smallest of any Land Rover product – 36 feet for the SWB model. Yes, even the Defender 90 has a 37.1-foot turning circle, even with a 17-inch shorter wheelbase. The rear axle can provide seven degrees of steering, and when travelling at low speeds, it can steer in the opposite direction from the front wheels to decrease the turning circle. It’s a technology that’s come and gone in the marketplace. GM tried to make inroads with Quadrasteer in the early 2000s, and Nissan put it in their Bubble Era 240SX of the 1990s. It’s made inroads in sports and luxury cars lately, but putting it on every Range Rover is a considerable expansion of the concept.

Those fully-steering axles are all combined into a system called Integrated Chassis Control, which connects a suite of suspension and dynamic systems to tailor the vehicle’s driving experience to the moment. The new Dynamic Response Pro swaybar is electronically-controlled, not hydraulic. A torque capacity of 1,000 lb-ft helps keep the Range Rover massively strong and stable on the road. The traditional Range Rover air suspension combines with twin-valve shock absorbers, all managed by software. 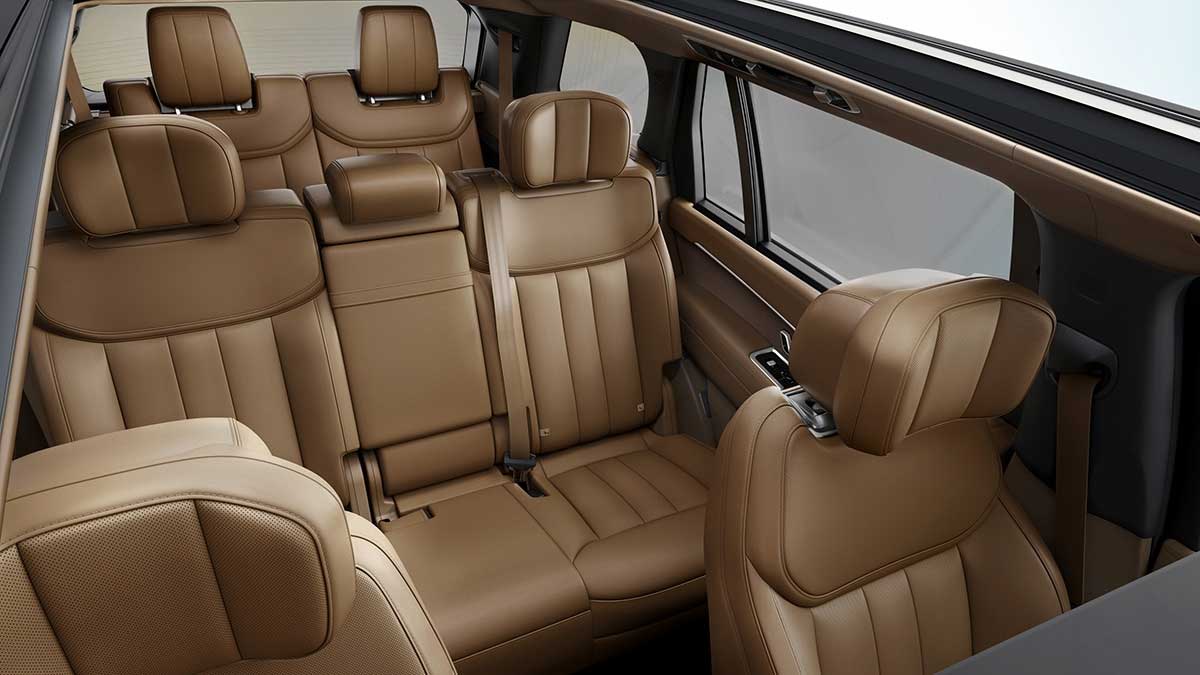 Every Range Rover comes with a locking rear differential. By spending $550 on “configurable Terrain Response,” the serious off-roader can turn it off at will via the central touchscreen. Of course, it doesn’t need to be stated that every one will also feature Land Rover’s class-leading all-wheel-drive system and Terrain Response 2.

There will be two wheelbases, as in the L405 fourth-generation model, but there’s also a new option in the new model. Previously, the LWB was a luxury option, significantly more expensive with executive-class rear seats. Now, there’s also a “Long Wheelbase Seven Seats,” which will offer Range Rover’s first-ever third row. After many years of bucking the trend of a third row, the Range Rover caves and looks forward to the market potential of the option. No longer will George, Charlotte and Louis Cambridge have to slum it in a Discovery on their way to visit Grandma at Windsor Castle; there’s a Range Rover that fits everyone now.

The entertainment technology is modern as well, with the Pivi Pro touchscreen the centerpiece of the vehicle. Amazon Alexa is integrated into the car for voice control. All Range Rovers come with SiriusXM’s 360 product, which combines the traditional SiriusXM satellite-based channels with an expanded selection of streaming channels available when in cellular range.

Both SWB and LWB will be available in ultra-luxe SV editions, with extra levels of luxury. The vehicle will be filled with sumptuous textures, including the option of non-leather fabrics.

The icing on the cake for Land Rover enthusiasts is that the Range Rover will be produced in Block One, the historic original Land Rover factory where the first Series Land Rovers rolled off the line in 1948, and the last Defender was built in 2016. Vacant for the past few years, now the Range Rover will make its home there, with an all-new state-of-the-art production line. The Range Rover is a new triumph of British engineering, with all design, development, and engineering done in the UK. Land Rover filed 125 patents for technology used in the truck, and put it through 140,000 hours of computer analysis before physical testing.

The fifth Range Rover may not be the biggest design departure in the car’s history. Still, it brings the truck into a new era of technological excellence, always the hallmark of the car that brought things like four-corner coil springs, ABS, and air suspension to the 4x4 market. Prices start at $104,000 for the SE model with the 6-cylinder Ingenium motor. While it’s hard for some to swallow a six-figure starting price, it does offer a lot of features and comfort even in base-model form, and tracks not that far above the inflation-adjusted price of Range Rovers since the 1980s. Dare it be said that the Range Rover, with its iconic shape and epic features and capability, is the best value in luxury SUVs?