The overland world has exploded in the past few years, turning what was once just fancy backcountry car camping into one of the outdoor industry’s most significant segments. It’s also generated a large community - a multi-marque group of off-road camping enthusiasts. One of the longest-standing establishments connecting this community is the Overland Adventure Rallies, a series of three events in the USA and Canada.

The Overland Adventure Rallies are run by Ray and Marianne Hyland, first and foremost Land Rover enthusiasts from Chilliwack, British Columbia. The Hylands are perhaps most famous for recreating the route of the 1955-56 Oxford and Cambridge Far East Expedition in an 86” Series I with their three then-teenage sons in the mid-2010s. But beyond that triumph over geography, adversity, and hormones, they’ve been a significant part of the overland community since its modern roots in the 2000s. 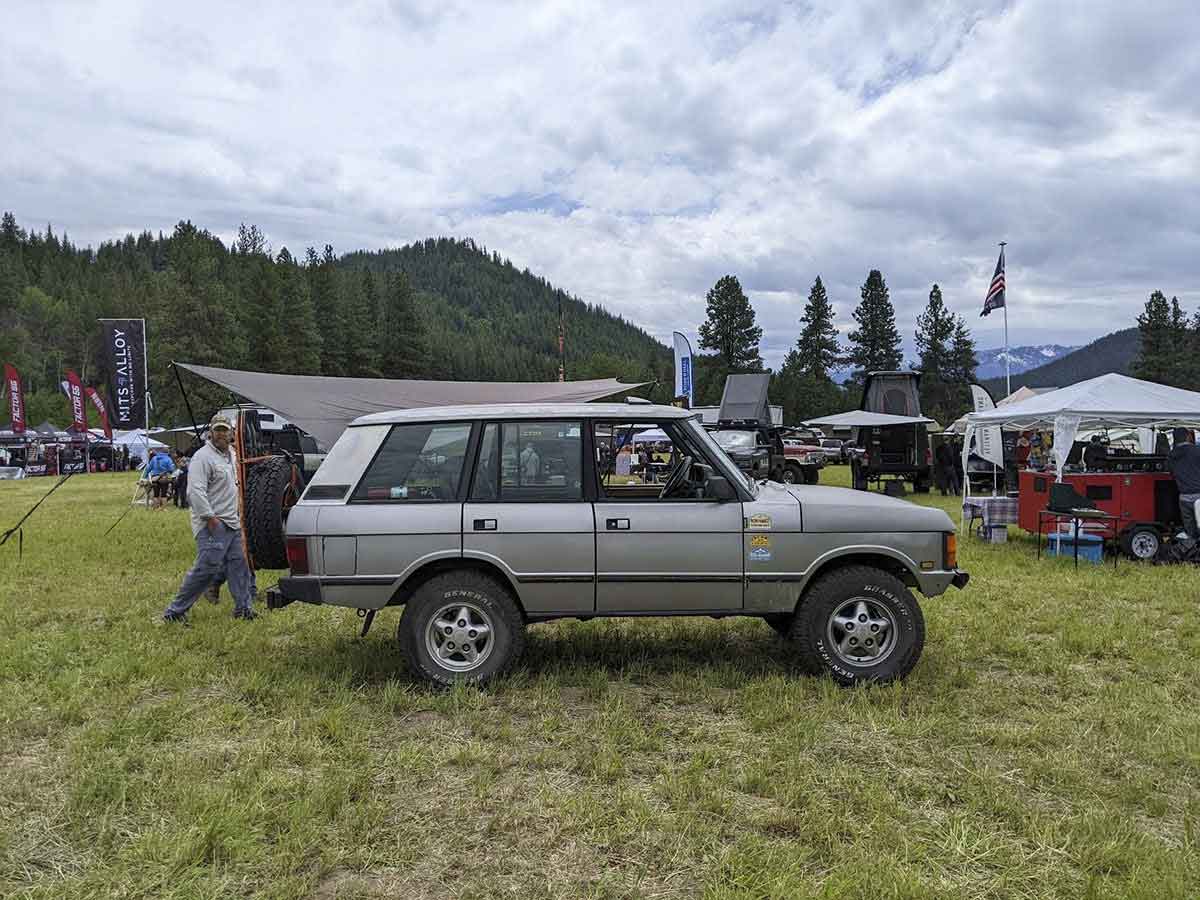 Ray was involved in founding this rally series when he was part of the staff of Overland Journal in the early 2010s and has since taken over and split them off into their own successful enterprise. There are three events every summer. Northwest Overland Rally (NWOR) in Plain, Washington, draws a crowd from the Pacific Northwest and parts of British Columbia. BC Overland Rally (BCOR, or as everyone says it, "bee-core"), held this year in Merritt, British Columbia, is one of the largest Canadian overland gatherings, with a huge attendance from BC and Alberta. The Rocky Mountain Overland Rally (RMOR) is held in Gunnison, Colorado, in July, though it has been canceled for 2022.

I attended NWOR and BCOR, held on subsequent weekends in June, with my friend Spencer from Vancouver, BC, who has been a regular at these events for many years. While the events are not Land Rover-specific, both draw a large group of Land Rover enthusiasts, including many people from the Rover-Landers of BC club, many of whom are key volunteers who help run the proceedings. 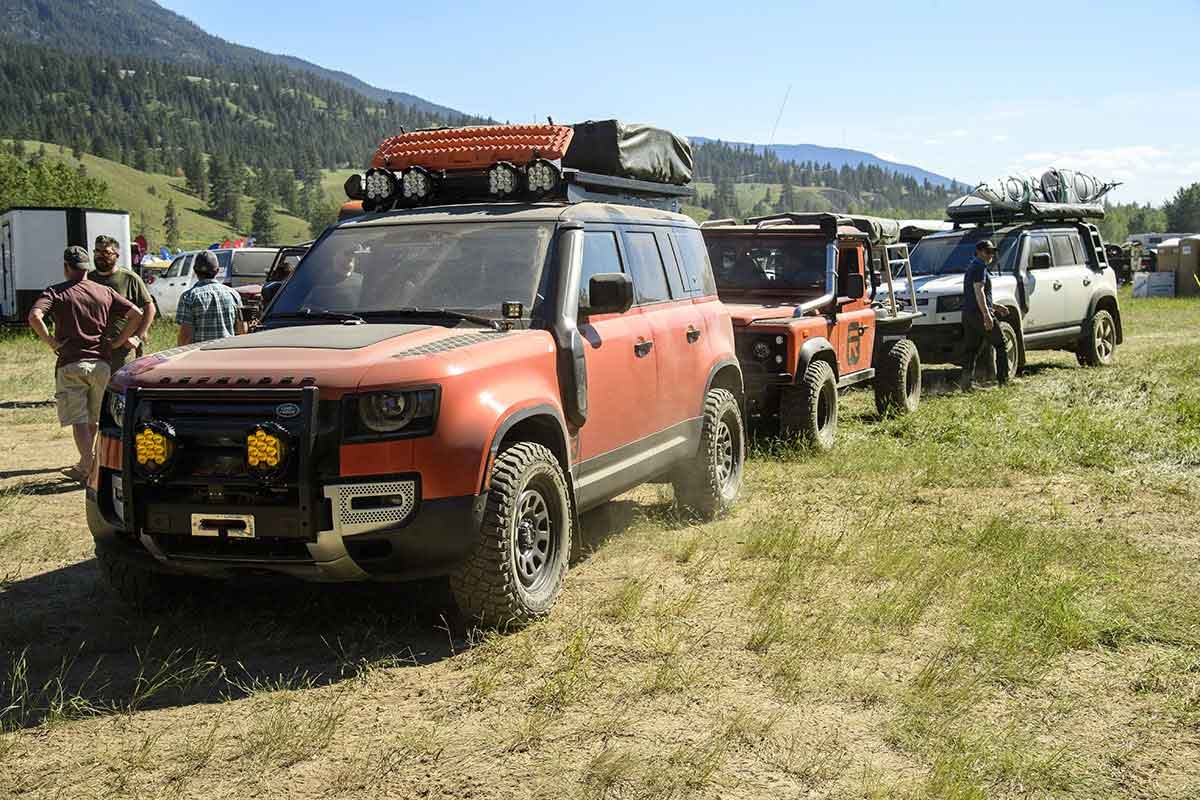 There were a number of Land Rovers at both events. As with any Canadian-heavy event, there was also the treat, for Americans, of seeing Defenders ten years newer than we can legally import. Ray and Marianne run around the event field in their Defender 110 and their 1988 Range Rover Classic, which was the first vehicle to drive up the new permanent highway to Tuktoyatuk, Northwest Territories. A number of long-term travelers came to the event, both in Land Rovers and other vehicles. For people who are always on the road, these events are a pausing place, a place to connect with other friends and recap on the things they've seen, as well as restock on new supplies and tools. One of the vehicles that attended both rallies was "Fitz," the Defender 110 owned by longtime Roverlanders members Dave and Pamela Blair, who drive it on regular long-distance trips. It was actually Fitz's final outing in its regular Defender-shaped form before being fully reconfigured into a more long-term friendly camper setup. Events like this allow you to see the options and vendors available when making major vehicle modifications like that, in a way you could never quite do online.

At BCOR, there was also an old-versus-new Defender comparison on the off-road trail. The generations were run through the course, and everyone got a chance to see how they each handled the components differently when obstacles were attacked the same way. Both generations handled the course with aplomb, though the new truck honestly cruised through things the iconic classic had to put more work into. 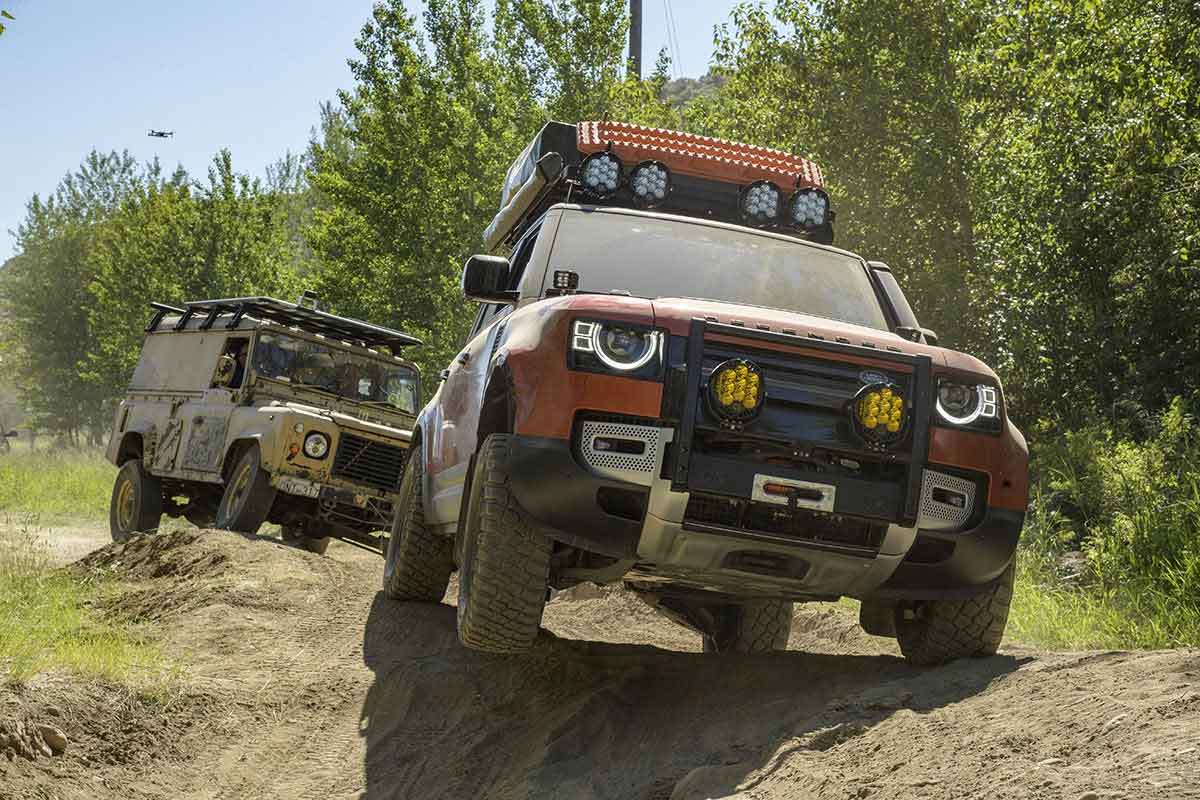 Both events are run in the same manner. There’s a vendor field where the latest overland wares are on display to compare and contrast against the competition – possibly the greatest benefit of going to one of these events. There’s also an educational track running throughout the day. These seminars and workshops offer something for everyone from the new overlander looking to learn basics to the experienced globetrotter looking for advice on new intercontinental destinations. Camping is on the fringes of the vendor field, with just as much to see in the campground as in the shopping area.

There’s also an off-road track at both events, with professional guides and recovery experts on hand. The tracks are set up by several respected off-roaders, including Chris Walker of Overland Training Canada and his team, many of whom have worked with Land Rover on various global off-road events.

Each night, there’s a campfire story at the communal fire pit (usually an international travel story), followed by a generous raffle with high-value prizes donated by vendors. Everyone gets a ticket, and the prizes range from t-shirts to four-figure roof-top tents. Any ticket that goes unclaimed is chucked in the fire, to the primal call from the crowd of “BURN IT!” 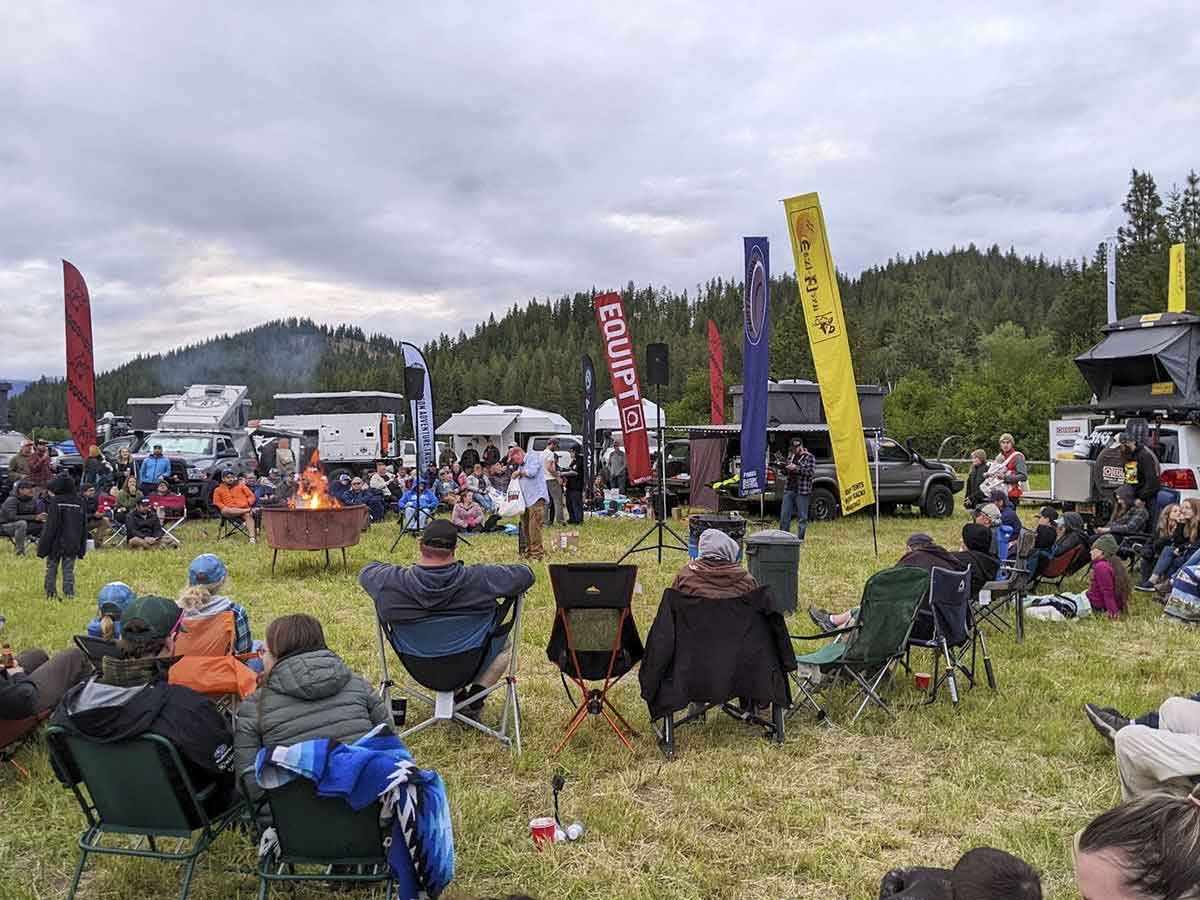 Spencer and I started our two-weekend adventure with NWOR, heading down from Vancouver and hooking east at Everett, Washington, along the western reaches of US-2. This northernmost federal numbered highway traces the path of the Great Northern Railway, climbing up Stevens Pass, one of the major historic transits of the Cascades for both railroad and vehicles.

The town of Plain, Washington, is nestled in the Cascade Mountains, tucked into a valley behind Highway 2. It’s been home to NWOR for almost a decade now, and it’s a great location for the event – in proximity to many major Pacific cities but offering a certain backcountry vibe. Snow-capped mountains loom in the distance, and the Old Mill Cafe across the street from the rally grounds offers a fantastic breakfast if you don’t feel like cooking it at camp.

The BC Overland Rally moved again this year after a stint at local ski hills, including Whistler's Olympic ski jump venue. The event's new home is Merritt, a town in the Nicola Valley that’s one of the centers of BC’s logging industry. Spencer and I had actually been here just a few months ago when we explored the Southern Interior of BC in September.

Since that trip, massive flooding in November ran through town, just part of a streak of damage along the Fraser and Coldwater Rivers. The event site, which is one of the campgrounds for the Rockin’ River country music festival, was under several feet of water, and the dusty dry silt still covered the ground. Still, it’s a nice central location for attendees from all across British Columbia (Vancouver is only three hours away) and just within reach of the two Albertan population centers of Calgary and Edmonton, and only has room to grow the event further. 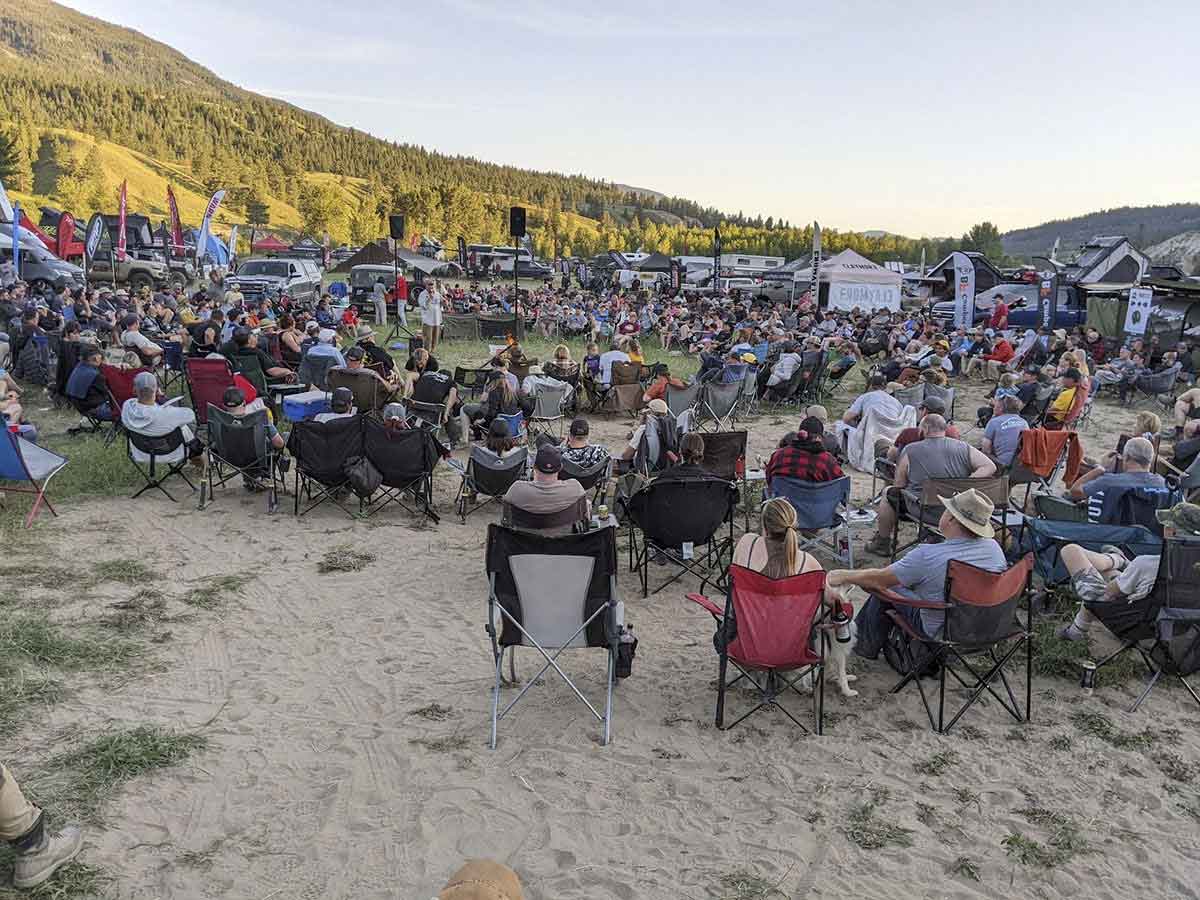 Both events are enjoyable weekends, with a great sense of community on a more manageable scale than the ever-growing Overland Expo. Their longevity and stature in the community also mean that some of the most experienced overlanders attend them and enjoy the community in a more laid-back environment. It all comes together as a sort of throwback to a simpler time in the overland world and a great place to get your bearings on the pulse of the sphere whether you’re a long-time overlander or just looking to get into it.