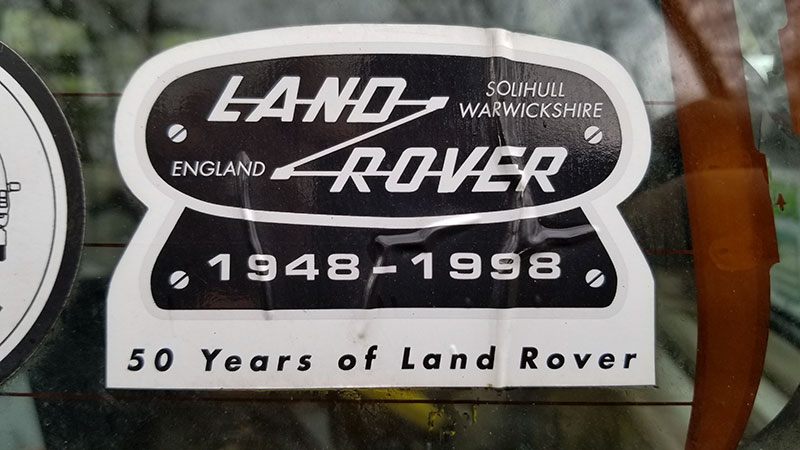 In 1998, Land Rover celebrated its fiftieth anniversary, a major milestone for any company. It was celebrated in due style, particularly in America, where Land Rover was enjoying success with Range Rover and Discovery sales. Many enthusiasts consider the 1990s one of Land Rover's greatest periods, and the 50th Anniversary was certainly part of that. It also created a significant cache of memorabilia that still circulates. As we celebrate Land Rover's 72nd anniversary, let's take a look back almost a quarter-century to how we celebrated in North America.

The 50th Anniversary in America was branded with a logo similar to the plaque on the back of an old Series Station Wagon, utilizing the traditional Land Rover logo with a rider underneath that replaced the "Four-Wheel-Drive Station Wagon" text with "1948-1998." It appeared on everything from stickers to plaques to lapel pins to shirts to MagLite flashlights that year. Much of this memorabilia still circulates around enthusiasts.

Two 50th Anniversary special edition vehicles were created for the anniversary -- a P38 Range Rover 4.0 SE, and a Discovery 1. Both were painted in Woodcote Green, "a distinctive color drawn from nature" as the press release said. Woodcote was a rather bold metallic forest green with yellow tinges. (There are rumours that these special editions were created to hustle a bunch of trucks in a poorly-selling paint color, but there's no confirmation of that.) The P38 featured walnut wood trim that was exclusive to the special edition, color-keyed mirrors and lower spoiler, and 18-inch Proline wheels. The Discovery had a Bahama Beige interior with Lightstone piping, leather grab handles, and TWR alloy wheels. Both vehicles would have individually numbered plaques. Although there were supposed to be 250 Range Rovers and 500 Discoverys produced, information on these vehicles is a bit thin on the Internet. These vehicles were launched at the Toronto Motor Show in February 1998, and featured in "The Land Rover Journal," which was the full-line brochure and magazine that Land Rover produced for several years around the turn of the millennium.

All 1998 Discoverys had a decal in the cargo area quarter windows, which denoted the 50th Anniversary. This does not, however, make these Discos a "50th Anniversary Edition."

All Land Rover owners at the time were invited to 50th Anniversary Parties at their local dealership, to be held on April 30th, the anniversary of the company. These parties featured refreshments, giveaways, activities for kids, and at many dealers displays of historic vehicles. Each dealer had a drawing for a free trip to The Land Rover Lodge, a summer-long retreat held in Colorado that would turn out to preview the upcoming Discovery Series II. A nationwide drawing was also held to win a Series Land Rover. Attendees were given anniversary plaques on the way out as a party favor.

A larger event was also held at Land Rover North America's headquarters, then located in Lanham, Maryland. This bash included the ability to drive the test track in the woods next to the offices. Drives were given in a rotation of various vehicles, including a Camel Trophy-veteran diesel Discovery 1.

As far as the club scene went, most clubs tended to put some kind of anniversary spin on their events, and it influenced t-shirt design and event activities all year. The flagship club celebration, though, was an event held at Greek Peak Ski Resort in Upstate New York, held from July 31-August 2, 1998. The event was run by the Association of North American Rover Clubs, an organization formed by leadership from Ottawa Valley Land Rovers (OVLR), the Bay State Rover Owners Association (BSROA), and the Rover Owners Association of Virginia (ROAV), along with other Land Rover clubs. The event was spearheaded by Bill Caloccia, Sandy Grice, Christine Rose, Dave Meadows, and Dixon Kenner. "Greek Peak" as it's known in Land Rover lore hosted about 350 trucks for a summer's weekend. Activities included off-roading, an inter-club Road Taxed Vehicle (RTV) course competition (sponsored by Atlantic British), a gymkhana "consisting of a number of parts to see how well you know your Land Rover" (OVLR Newsletter, August 1998), technical sessions, and merchandise. 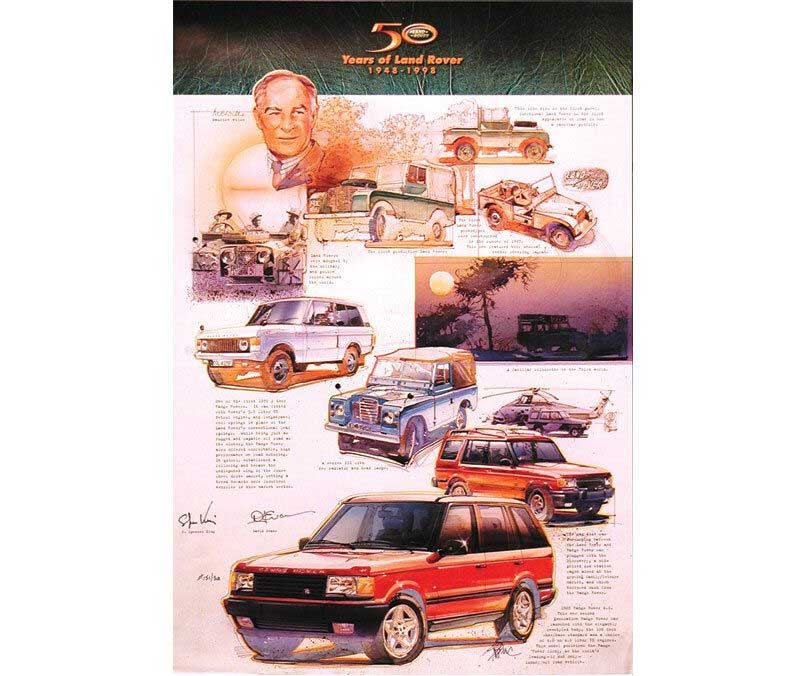 Looking back almost a quarter-century later, Land Rover's 50th anniversary year seems to in some ways represent the peak of the ethos of the brand and the club community in the 1990s. Hopefully, by the time 2023 rolls around, the 75th will be just as much of a firecracker affair for a new era.