The Hardtop designation is a very old one at Land Rover, going back to 1950 and the first time a metal roof was bolted to a Series I. The Series and Defender were always offered in a cargo-focused variant, with no back seats. This has been both for utility and for tax laws in certain countries, particularly in Europe, where some countries tax commercial vehicles at a far lower rate than passenger vehicles. (This is the same reason the Discovery has always been available in a two-seater cargo-focused version, including the newest version.)

The Defender Hardtop will come in 90 and 110 variants, and unlike the passenger models, both will be available with standard coil springs. The 110 will also have the optional air suspension that's standard on passenger 110s. None will come with backseats, but they will have the option of the center jump seat that is available on all Defenders to seat three across up front. 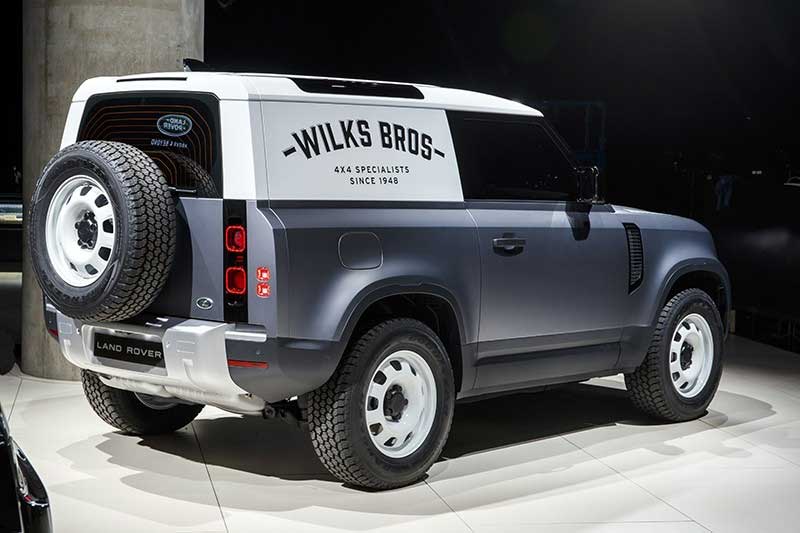 The Defender Hardtop will benefit from the vehicle's almost 2,000-pound payload and massive towing capacity -- 7,700 pounds of towing capacity under European ratings, 8,100 pounds under US ratings. For towing, the vehicle offers Land Rover's Advanced Tow Assist system, which lets you steer trailers with a knob on the dash when backing up.

The roof and side panels of the Hardtop are also different from the passenger version. The 110 still has rear doors, for side access to the cargo space, though they will likely be divided from the front compartment by a barrier for tax category and safety reasons. The 110 also seems to be missing the controversial "floating character square" that covers the C pillar on passenger variants. Although it's not entirely clear from the photographs, it seems as though the side windows are blanked off behind the front doors to prevent tax-dodging conversion to passenger specification.

For true Land Rover nerds, the demonstration Defender Hardtops shown so far (the 90 at the Frankfurt Motor Show, the 110 for press photos) each have an Easter egg in the fake businesses they advertise on signage. The 90 advertises "Wilks Bros - 4x4 Specialists Since 1948," a tribute to the Wilks Brothers who created the Land Rover during their tenure in management at the Rover Car Company. The 110 advertises "Six Six Three Construction," which alludes to the new Defender's chassis code, L663.

While the Defender Hardtop is not yet announced as America-bound, it's not beyond the realm of possibility. In November 2019, JLRNA CEO Joe Eberhardt raised the possibility of importing the basic model, at least in 90 size. In an interview with Motor1, he said "it’s possible, not only for commercial use but also because there are people that will just like the look of it...it’s something we’re definitely taking a look at." It should be noted that this statement was made before the world descended into Coronavirus-related chaos, but it seems that it's definitely being considered.