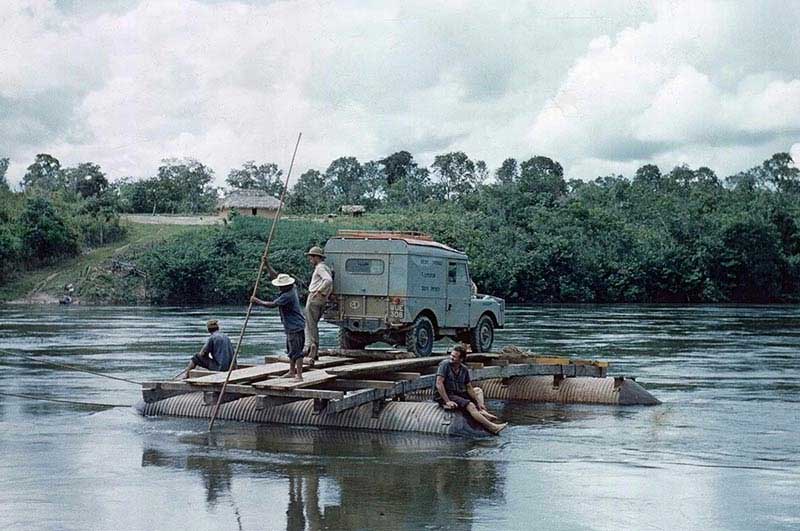 Over the years, many Land Rovers have performed famous feats of expeditions. Some of these veteran Land Rovers are still around, while others have disappeared. Adam Bennett, a Land Rover enthusiast and restorer from Yorkshire, England, is on the hunt for some of the holy grails of missing Land Rovers.

Bennett already found one Holy Grail -- "Oxford," one half of the Oxford and Cambridge Far East Expedition of 1955-56. It was lying in pieces on the British Overseas Territory island of St. Helena, far off in the Atlantic. Loaded into containers, it returned to England on the world's last lifeline Royal Mail Ship, the now-retired RMS St. Helena, in partial trade for a 300tdi Defender. It's about to replicate the First Overland trip from Singapore to the UK, in an adventure that's known as "Last Overland." Original team member Tim Slessor will join filmmaker Alex Bescoby on a reverse redux of the route, with some adjustments for modern geopolitics. (They leave on August 25th from Singapore; look for updates on the 100-day expedition in upcoming Roverlogs.)

But the other truck, Cambridge, has been missing since 1958. After the First Overland team got home, Land Rover used it for PR. However, in 1958, the Series II came out, and Land Rover didn't want to use a Series I for PR anymore. (That's the same reason they forced a Series II upon adventuress Barbara Toy at the same time.) It was sold to a dealer, who sold it to a group of young adventurers who drove it to the Middle East. On the way home through Iran, somewhere between the Iranian city of Tabriz and the Turkish border city of Doubayazit, it careened into a ravine, never to be seen again. 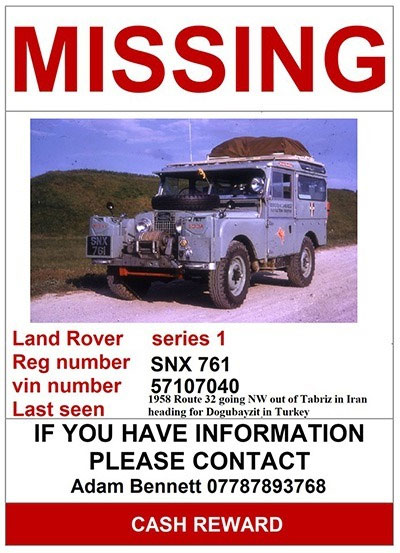 The last driver of the vehicle, Terence Bendixson, sent Bennett this message, and it sends a tone that there's never going to be much primary-source information beyond this to go on.

Adam I am not going to be able to spend a lot of time on this. Having had a look at the Atlas and at a Google map, my reckoning is that I was on Route 32 going NW out of Tabriz in Iran heading for Dogubayzit in Turkey. But, and this is very important, I have not a clue how far along the road from Tabriz to the border I was when I crashed the car.

It is about 140 miles from Tabriz to the border. That is a long way and, given that the roads were not good in those far off days, I would guess that the trip would have taken three to four hours. Was I that long in the sheep truck that took me back south eastwards from the site of the crash to the hospital? It is possible but it may be that my story of the border guard is incorrect. Maybe the crash was nearer to Tabriz? Perhaps the chap with the carbine was not a border guard? Or was I told all that by the nice Mr Bottomley (his name was something like that) from the British Council in Tabriz?

Is Cambridge still out there, lying in some Iranian ravine? Or was it almost instantly scavenged for parts? The quest is not an easy one, considering Iran's political situation.

Three of the other Land Rovers that Bennett is looking for are consecutively-registered Series Is -- WUE 306, WUE 307, and WUE 308. These were used in the Oxford and Cambridge Expedition to South America, the third of the series of expeditions between the two universities. These trucks disappeared between the 1950s and 1980s in the UK and Africa.

If you know what happened to these trucks, Bennett is offering a cash reward, and his contact information is on the wanted posters.