Just like the Land Rover broke down barriers, Barbara Toy did too, taking some of the first extremely long-range expeditions with the new Series I Land Rover in the early 1950s. A woman traveling solo, she took her truck, Pollyanna, around the world, focusing often on the deserts of North Africa and the Middle East. Not only was she one of the first women to travel long-distance overland solo; she was one of the first people to do it at all. 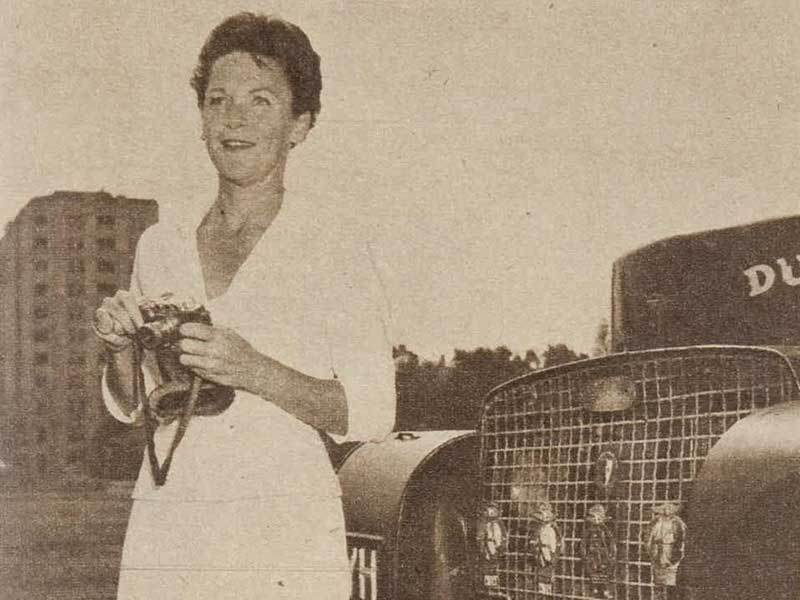 Toy's adventures are relatively well-known now among Land Rover enthusiasts. They produced a set of nine books, detailing the various expeditions she undertook in Pollyanna and a later 109" Series II. Born in Australia, her father was a war correspondent who had reported on the Boer War for Australian and New Zealand papers. Toy's parents did not believe in formal education, and she was almost entirely self-taught. She married an American, who introduced her to a love of travel and books, and then later divorced him and moved to London.

In London, she unsuccessfully attempted an acting career, and then switched to playwriting. One of her credentials was an adaptation of Agatha Christie's Murder at the Vicarage. She would work in Britain in theatre management until she began her travel career.

In 1950, during a night at the pub with friends, they bet her that she could not go to Baghdad, a place she wanted to go to badly, because of visa and currency restrictions at the time in Iraq. She countered by telling them, "As a matter of fact, I'm off to Bagdad [sic] in a week or two." She had a philosophy that life is gloriously free, and if you really want to do something, nothing and no one can stop you. So she decided to prove that point.

Having had no concrete plans to go to Iraq until that moment, she sourced a factory demonstration 1950 Land Rover Series I 80" soft top, arranged visas and paperwork through the countries in North Africa, and had the Land Rover shipped to Gibraltar. Her journey took her east across North Africa, via French Morocco, Algeria, Tunisia, Libya, and Egypt, then by ship to Cyprus, Lebanon, Syria, Jordan, and Iraq. In Iraq, she would rendezvous in the ancient city of Nimrud with Agatha Christie and her husband, noted British archaeologist Max Mallowan, who was leading archaeological works there.

On her way out of Gibraltar, a British military brigadier told her she was a "Fool on Wheels" for attempting such a journey. This turned into the title of her first travelogue in 1955, A Fool on Wheels: Tangier to Baghdad by Land-Rover, kickstarting her traveling writer career.

After returning to Britain, she found herself addicted to traveling with Pollyanna, and soon arranged her next trip. She spent much of 1952 exploring Libya. Pollyanna was modified with a hard top, painted white to reflect the sun. These adventures would become A Fool in the Desert: Journey in Libya.

In 1953, she wrote King Abdul Aziz Saudi Arabia for permission to explore his country by Land Rover. It was granted, making her one of the very first women to travel solo in the country. She met the King and his harem and took home a men's wristwatch and two gold-threaded Arabian robes as gifts from the King. She would make the watch part of her daily wardrobe, with the king's personal standard and two crossed scimitars of Saudi Arabia on it. On her way home, bandits cut the roads she had to take back to England, so she rented a 30-room house with a pool, servants, and a date palm tree for £1 a week, and stayed there for several months writing her book and learning Arabic and French. The only other Europeans for hundreds of miles around were the English District Commissioner and a German female doctor. A Fool Strikes Oil: Across Saudi Arabia detailed this journey, a ground-breaking one, considering Saudi Arabia has only recently lifted its modern legal restriction on women driving. At one point, to avoid issues, she hired a boy to sit in the left seat of the truck as a decoy, as Saudi Arabian vehicles had steering wheels on the left.

In 1956, Toy decided to take her adventures to the next level and drive Pollyanna around the world. She drove from England to Turkey and Pakistan, then across Asia to Singapore, to Perth, Australia by boat, across to Sydney, and then after a trans-Pacific shipment, across the United States from California to New York. Columbus was Right! Rover around the world told the story of this remarkable voyage -- the London to Singapore leg coming just months after the more famous Oxford and Cambridge Far East Expedition, also known as the "First Overland" trip.

In 1959, Land Rover traded Toy a brand-new 88" Land Rover Series II in exchange for Pollyanna. They felt that driving an 11-year-old previous-model truck with 210,000 miles on it did not befit the image the company wanted to project anymore. She regretted this trade immediately and opens the prologue to In Search of Sheba with her leaving Solihull after the swap:

"The engine hummed quietly and I felt the extra power. The wind-screen wipers moved in a steady rhythm, two of them. I passed the high gateway [out of the Rover Co.] and turned left. It was incredibly difficult to see anything! 'The damned snow! The damned road! This damned car!' I said to myself, 'I can't see a damned thing!' and wiped the tears from my eyes."

Her adventure in the Series II in 1959 was across the Sahara, from Libya to Ethiopia. She traveled through The Congo to the massive Lake Victoria, one of the feeders of the Nile River. She followed the Nile to Khartoum in Sudan, then wandered Ethiopia and Kenya.

Along the way, she was the first Westerner to go to the top of Mount Wehni, where the heirs to the throne of Ethiopia were customarily interned in a royal prison until they assumed the throne, for unknown reasons. Explorer Thomas Pakenham had just become the first European to see the site in 1955, but could not ascend because of a landslide. Toy hired a French helicopter pilot to attempt to land her there. After four tries, he put one skid on the mountain and told her to jump. With a crude tent setup, she spent the night on the mountain, constantly alert for what she thought was a creature prowling around. When she got a chance to identify the footsteps, it turned out to be a large leopard.

Her 1961 expedition was undertaken in a 109" Series II Dormobile camper. She wanted to see the cave drawings found in Algeria in 1933 by a French officer in the Tassili n'Ajjer and see what she could find of the legendary highway from the Mediterranean to Niger that was driven by chariots in prehistoric times. This became The Way of the Chariots.

A few further books came, and at some point, it seems that Toy's Land Rover writing career wound down. She always pined to repurchase Pollyanna, which had been donated to a boys' technical school and ended up in the hands of a collector who refused to sell it to her. After his death, she repurchased the truck for £3,500 -- many times the £640 she paid the first time -- and promptly went around the world again at age 81, getting home right before Christmas. Then she replicated Hannibal's trip over the Alps. In 2000, she was trying to get together the logistics to drive Pollyanna to Yemen, but she had too much trouble getting insurance. "When I ring up and say I'm 90 and my car's nearly 50, they seem to lose interest."

Barbara Toy died on July 18, 2001, three-and-a-half weeks before her 93rd birthday. She had lived an incredible life of adventure, published eight books, was a fellow of the Royal Geographic Society, won their prestigious Rover Award (no relation to Land Rover), and had proven the worth of the Land Rover in its earliest days.

Pollyanna now lives with Guy Pickford, who was her mechanic in her latter days. In 1998, he went with her to a Swiss Land Rover show. He persuaded her to enter Pollyanna in a contest, where she won the local and regional prize. She won a £250 gift certificate to a local parts company and a chance to win a 1998 Defender 90 50th Anniversary Edition, a V8-powered soft-top that was for most intents and purposes a right-hand-drive North American Specification vehicle. She wasn't too excited about it, unlike others; she hadn't even thought that her Series II was all that reliable.

"Even if I won, I wouldn't take that car off alone. I'd insist that Tom came with me, driving Pollyanna close behind."