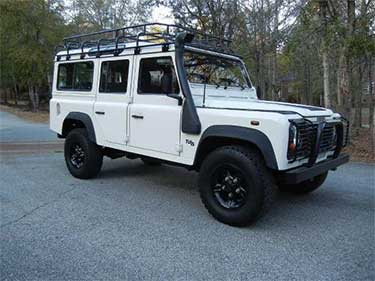 We have a full line of Defender parts and accessories.

Defender owners are among the most active customers we have at Atlantic British. Many have a vision on how they wish to have their vehicle modified and customized, and we support their vision by going out and finding new and imaginative parts and accessories for their Defender 110s.

The Defender 110 was the first utility Land Rover sold in the states since the mid 1970s. As it was an re-introducton in 1993, and there were many different safety requirements Land Rover had to comply with, the Defender 110 L316 became a Limited Edition model, with only 500 "officially" ever sold in the United States. In subsequent years Rover manufactured the Defender 90, a 3.9 litre V8 convertible which marked Land Rover's mass-production return to the U.S. market. This Defender ran into trouble with the government because its design didn't include airbags. A major retrofit being impractical, Land Rover stopped importing them to these shores (although there are rumors of its imminent return).

While few in number here in the U.S., Defenders. and especially the Defender 100, are very popular around the world, often retrofitted to serve as military, medical and rescue vehicles. However you want to outfit your Defender, trust Atlantic British to have what you need in stock.

Take a look at the Defender 110 parts and accessories we have available, and stake a claim of your own.