If the solenoids in your Discovery Series II's shuttle valve corrode, this may result in error lights on your dashboard - the three lights commonly referred to as the "Three Amigos"!

The problem could be corroded solenoids, the whole shuttle valve assembly or ABS senor. 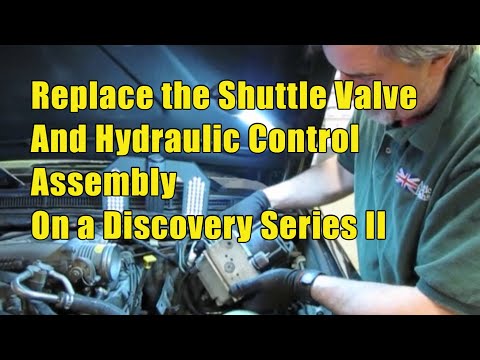 Atlantic British Ltd. Repair & Maintenance Academy How-To Video: A common issue with Discovery Series II, is the shuttle valve failure on the ABS System. The failure is indicated when the warning lights come on for the ABS, Traction Control and Hill Descent, affectionately known as the "Three Amigos." In this video, learn how to say good-bye to the 3 Amigos: Watch Doug, our Land Rover Master Technician, show you options on how to tackle this common issue. He will remove and replace the Hydraulic Control Assembly (special order part # SRB500570 - formally part # SRB101203) on a 2002 Discovery Series II. Doug also discusses replacement of the ABS Modulator Shuttle Valve Switch (part # SWO500040) in this video. Questions about this video? Call our knowledgeable sale staff at 1-800-533-2210 or contact us via live chat.

So far the trio have not returned after replacing the solenoid switch. Itâs very easy to do, especially with the instructional video.

Adios Three Amigos! And then they return, and they vanish, and return...and vanish. Disco 2 ABS is of such poor design that yes, a new Shuttle Valve Switch with throw ABS codes and the 3 Amigos!

Worked great fixed 3 amigos. Thought I was going to have to replace ABS module. Removed and installed new part. Fixed.

Good product got my three amigos light off for about a week. But now i think i have abs valve problem. Because light is back on. Need to get a wire dirgram and double ck wires before i buy a valve from u guys.

Installed the solenoid and the 3 amigos were gone, but they showed up again 3 days later, and they went away again. I see no corrosion or leaking oil so I guess I'll have to jumper the solenoid....

Why, did all as advertised. Dislike, Price. Recommend--Yes.

Easy to install and video from Atlantic British helped tremendously!

This was an attempt to eliminate random Three Amigos from showing up. This part looked just like the one taken out, minus a bit of crud in the old one. After a couple of drives the Amigos appear to be gone, at least for now.

It looks like it will do the job. I'm waiting for response to my question on the torque spec to remove and replace the shuttle valves themselves in order to install new seals.

Perfect solution to fix the ABS module, and finally turn off the light warnings, ABS, TC, Brake, (3 amigos), the brake pedal is soft and braking power is back

Don't know if its working or not. Needed to be replaced because old one had frayed wiring. So I'm glad I did that anyway. I am very satisfied with Atlantic British.

Called my friends from Atlantic British on the phone as my mechanic was pulling up my trouble codes, he knew immediately what was wrong,I ordered the part and was directed to a video that my mechanic and I watched In a couple of days we installed it and now I have a light free dash. Thanks AB

My shop installed this part in 30 minutes just like the video explained. No need to disconnect brake lines.

After watching the 3 amigo's fix video on the sight,I purchased the abs mod switch..as always got here fast as lightning! The video showed me how to install without having to remove the brake lines.After installation and two turns of the ignition switch,all lights off and all systems go! Couldn't be more pleased with the site,the service or the results! Cheers to Atlantic British! Rove on!

Product was great, brand new, and as advertised BUT, you better know what you are doing. The ABS unit on my 2000 D2 does not quite move enough without disconnecting the brake lines. If you do that, YOU WILL NEED THE TOOLS TO EVACUATE THE LINES. I called my regular LR repair guy and had him do the job. I gave him the part for a slight discount on the job. My bad.

Good part got the bolts too. Looked the same as the LR part that had failed. Got it next day too. Thanks