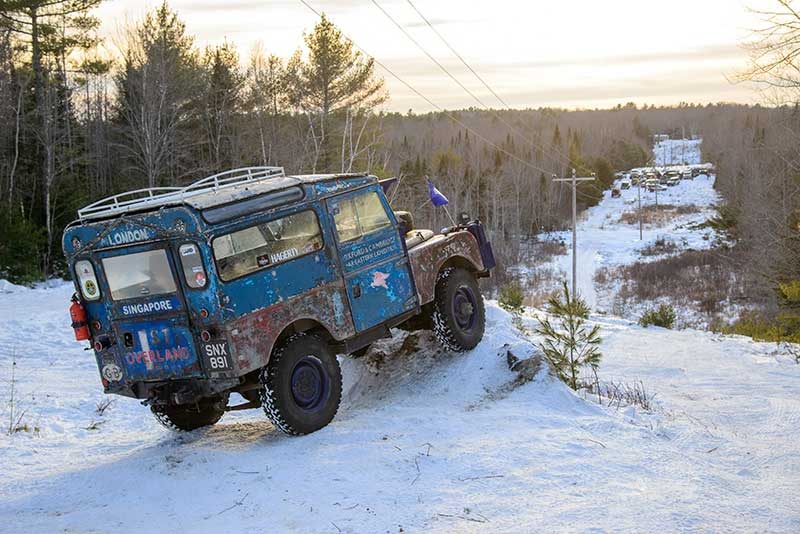 Winter Romp, or just "Romp," is a cherished example of what makes the North American Land Rover community special. The event is hosted by Bruce Fowler, a long-time Land Rover owner and resident of Benton, Maine. The event was previously held on land owned by neighbors via arrangements Bruce made with them, but last year through an incredible feat of crowdfunding, Winter Romp attendees purchased the properties that made up the trail network. They now comprise "Winter Romp's Millennium Green," a space set aside for the long haul for a variety of outdoor recreation pursuits. The social hub of the event is Bruce's house, just down the road from the trail network.

Unlike many other Land Rover events of this scale, Winter Romp has never had an admission fee. Bruce's main ask of attendees is that they spend their money at local businesses. Some of this is arranged via traditional group activities. Since it's rather cold in Central Maine in February, it's one of the few hotel-based Rover events. The Best Western Plus Waterville Grand Hotel is blocked out for the event, and the parking lot is full of Land Rovers as far as you can see. A few years ago, you could still get a room there the week before the event; now it's so popular, the place filled up in December 2019, and a large portion of the Fireside Inn across the street was full of Land Rover owners, too.

Meals are taken at a variety of locally-owned restaurants, some of which have become iconic parts of the Winter Romp experience. Big G's Deli, an institution in Winslow since 1986, has perhaps the longest tie to Romp. It's usually where everyone gets breakfast on Saturday, as well as one of Big G's massive sandwiches to save for lunch. 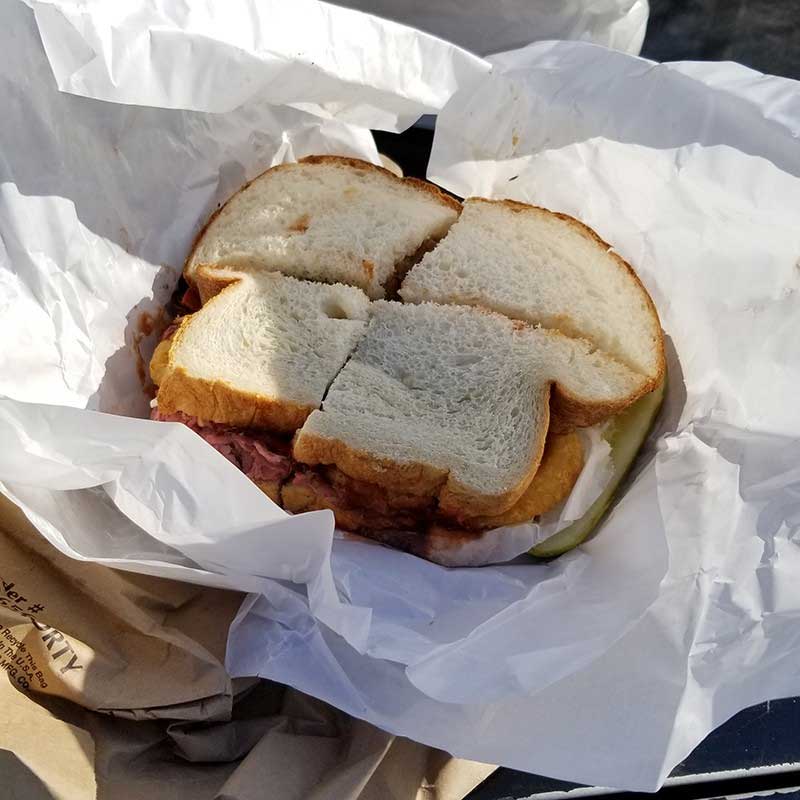 Other local businesses feature heavily on the itinerary, including Selah Tea Cafe, which made a special Full English Breakfast for Sunday morning, and 18 Below, which did a fantastic gourmet buffet on Sunday night for those who stuck around. The formerly semi-organized large Saturday dinner has been replaced by a list of local suggestions, as the event has grown out of supporting all the attendees at any one location.

Indeed, this was far and away the largest Winter Romp ever, with estimates of over 200 trucks attending. Part of the appeal this year was the attendance of Oxford, the recently-restored veteran of the 1955-56 Oxford and Cambridge Far Eastern Expedition, also known as "First Overland." It's one of the first Land Rovers to transit Eurasia, and after years of being abandoned on the remote South Atlantic island of St. Helena, it was recovered and restored in 2017. After retracing its steps home from Singapore to London in 2019, Oxford was shipped to America in January for a year-long North American tour. Romp was the first stop on the tour, with Oxford spending a week at Bruce's house.

However, there was plenty of space to absorb all those attendees, thanks to the new land purchase and the freedom to expand that afforded. Romp is prefaced by a number of "Pre-Romp" weekends, where die-hard attendees volunteer to clean up trails, prepare new ones, and enjoy a smaller version of the Romp vibe. This year the trail network expanded dramatically, creating a lot more space for all those people to go off-roading. Great weather this year helped as well, making the snowpack manageable for many trucks. Friday night was in the negative temperatures, but it warmed up to the 20s later in the weekend.

The trails, the people, that was all a highlight, but above everything, Oxford stole the show this year. Everyone had to get a picture with their truck and Oxford -- photos that Land Rover enthusiasts across America will be taking and cherishing this year. On Friday, the opening banquet was held in the event room at the Waterville Grand Hotel, and Oxford was kept inside overnight -- protective cardboard over the carpet, because like all good Land Rovers, it leaks a bit. 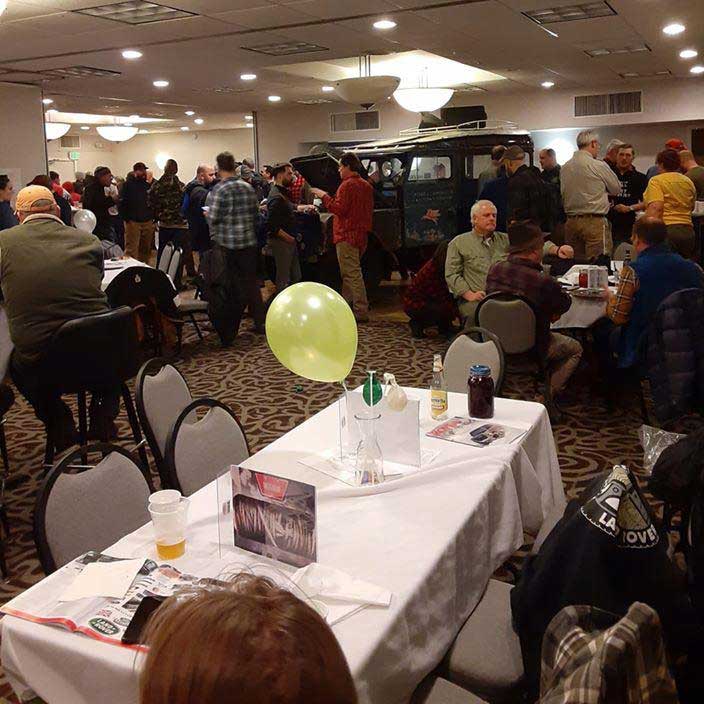 I had the honour of spending Saturday in Oxford with Bruce and Dixon Kenner, another long-time Romp attendee and fixture in the Land Rover community since the 1980s. The truck carries immense amounts of gravitas, and even though it's technically a relatively standard 86" Series I, the weight of its experiences around the world radiates out of the Birmabright. There were several times that we were driving down trails, bouncing along (as one does in a Series) and I was floored by the gravity of being in this vehicle, in my own country. It's a feeling a lot of Land Rover owners will have in 2020 as Oxford comes to events near them.

In the woods, the central meeting point is the "warming tent," where the Waterville Area Habitat for Humanity operates a snack operation to raise funds for their efforts. In the spirit of giving back to the community, Habitat is a major recipient of the charitable goodwill of Romp attendees. In addition to the warming tent, a donation to Habitat (along with the invite of a known, Land Rover-driving Romp attendee) is needed to bring a non-Land Rover vehicle to Romp. That fee is waived if you volunteer for 10 hours at the Habitat branch of your choice. Over the past few years, this partnership has helped Habitat make huge strides towards helping low-income families in the Waterville area. Overall, Romp is a huge boost to the area economy, at a time when winter fuel bills pile up and seasonal incomes are reduced.

Winter Romp has become the largest Land Rover event on the east coast of the United States, with everything from a 1951 Series I 80" to a 2020 Discovery 5 in attendance. Attendees now come from across the continent to be at Romp, and even if they haven't been yet, Land Rover owners often have it on their bucket lists. What's most remarkable is that this all happens in one of the coldest parts of the United States, which is also relatively remote from most of the nation's population. There's certainly plenty of Mainers at the event, but the majority of attendees drive at least three hours to get to Romp. That's a testament to the incredible event that has been built, both by Bruce Fowler and by the Land Rover community as a whole, for almost a quarter-century in the Kennebec Valley.