The new Defender family is complete with the launch of the Defender 130, the third size of the already-modern-icon 4x4. With seating for eight and an extended cargo area, it offers a distinct option in the Defender family and fills a large family vehicle niche Land Rover has never truly filled.

Just like the new 101.9”-wheelbase Defender 90 and 119”-wheelbase Defender 110, the Defender 130 name has nothing to do with the vehicle’s wheelbase as it did in the classical Defender. (Of course, the old D130 was 127” – and was called a Defender 127 until Land Rover decided to go with round numbers – so basically, everything is a lie.) In the interest of keeping the well-known brands intact, as well as preserving global trademarks, the L663 Defender 130 describes a vehicle with the 119” wheelbase of the Defender 110, with all the extra length – 13.3 inches – in the rear overhang.

The D110 is 187.4 inches long with the spare tire; the D130 rounds out at 210.9 inches. While that does add a lot of “junk in the trunk,” literally and figuratively, the benefit is that the new Defender 110 (and the Defender 90) have some of the smallest rear overhangs of any modern 4x4. It gives them a class-leading departure angle of 40.0 degrees and breakover angle of 27.8 degrees – better than the Jeep Wrangler or Ford Bronco, or even the old Defender, and it gives the D130 breathing room to add that extra foot-and-a-bit without causing major damage to off-road dynamics. Defender 130 has a departure angle of 28.5 degrees, slightly worse than Discovery 5’s 30 degrees and the brand-new Range Rover’s 29 degrees. The old Defender 110 and Defender 130 both had a departure angle of 35 degrees.

The off-road profile of the D130 is closer to the Range Rover and Discovery 5, both of which combine long wheelbases with larger overhangs. It also strikes a profile closer to the original Defender 110, which did not boast the svelte departure angle of the modern D110. The vehicle is 11 inches longer overall than the original high-capacity pickup Defender 130, which came in at 199.3 inches, but the old vehicle had a much shorter front clip.

The overall length of about 211” is just an inch short of a brand-new Chevy Tahoe and just eight inches short of an early 2000s GMT-800 Chevy Suburban. Land Rover is now operating fully in the sphere of the large American-market SUV, a competitive and immensely lucrative market space. There’s very little you can buy that comfortably seats eight adults, and Land Rover makes one of the very few entries into this niche that isn’t built by General Motors or Ford Motor Company. The other entrants in the eight-seat sphere are large crossovers, like the Hyundai Palisaide and Honda Pilot, which sacrifice other things in the pursuit of van-like peoplecarrying skills.

But Defender 130 isn’t directly competing with the GMC Yukon Denali or Lincoln Navigator, either, even if the prices are similar. First off, it’s not a body-on-frame pickup-based vehicle, which all other eight-seaters its size are. It makes slight towing concessions, though it is still rated to haul 8,000-plus pounds. It doesn’t offer quite the cabin width of a Tahoe or an Expedition. Instead, it has blazed its own trail in the eight-seat market, combining the character of the Defender line, the prestige and capability of Land Rover, and the functionality of a large American SUV. 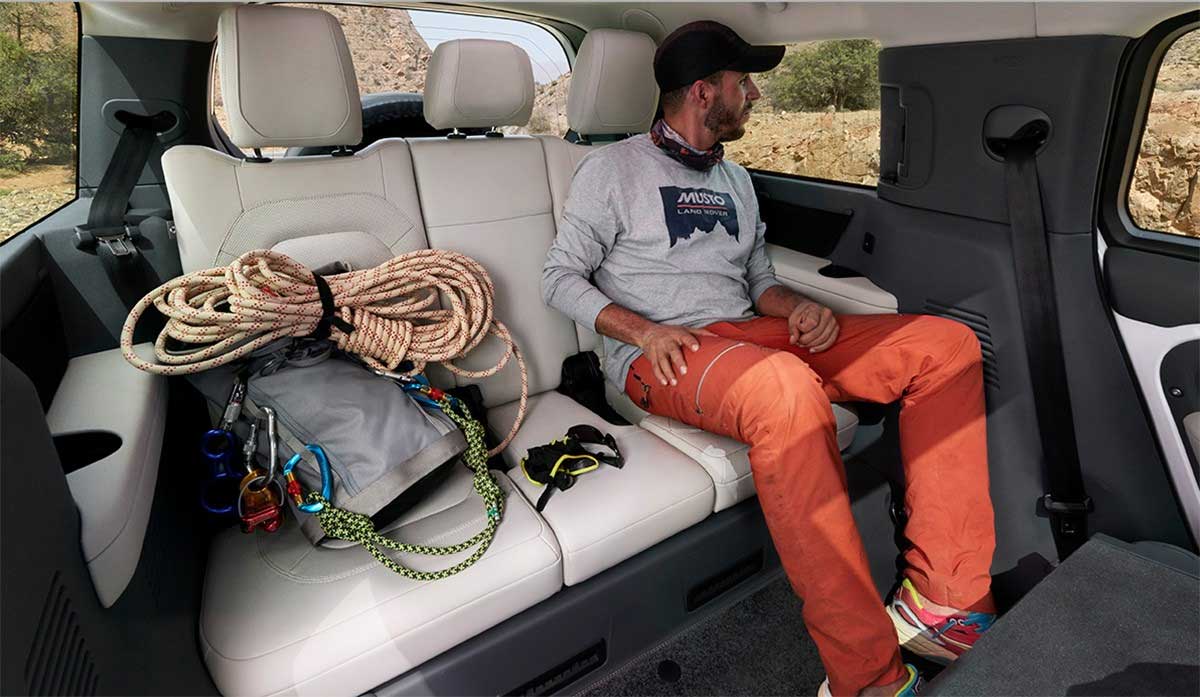 Inside, the Defender 130 offers a lot more space behind the second row. The most popular option will almost certainly be the eight-seater, the most capacious Land Rover sold here in many years. (Series and Defender long-wheelbase wagons seated up to twelve, but not all facing forward, and not as comfortably as the D130.) The only other Land Rover that has a third row of this caliber is the Discovery 5, which seats two full-size people in the way-back.

There’s another intriguing, less-discussed option for those who don’t need a third row: a five-seater option with a massive flat rear cargo area. Though Land Rover has not heavily publicized the five-seater (the D130 seats “up to eight”), it’s available in the customizer as “Standard Seating Configuration” and seems to have a lifting rear floor with under-floor storage. Those of us who own five-seat versions of seven-seat Land Rovers know that there’s a lot more storage when you eschew the third row. The D130 already offers 76.1 cubic feet of cargo space with the rear seats flat, and it seems like the five-seater will offer even more storage in cubbies and under the floor. For people looking for a new Defender for expedition purposes where extreme off-road capacity isn’t a big factor, it’s an intriguing choice. The rear load floor is over seven feet long with all seats folded, more than enough space to sleep in with cargo room to spare.

The off-road dynamics of a longer Defender are sure to suffer – math is math – but the Defender 130 continues to benefit from the approach and breakover angles of the Defender 110. The closest parallel is when the Discovery Series II gained six inches of overhang over Discovery 1, retaining other dimensions. It was never as nimble as the D1, but it still holds its own off-roading.

The D130 also holds a favorable position compared to other popular off-road vehicles, especially as all vehicles grow in size. It’s seven inches shorter than a Jeep Gladiator, and with a shorter wheelbase, it won’t suffer from the Gladiator’s tendency to high-center off-road. Toyota has effectively replaced the iconic Land Cruiser with the new Sequoia in America, and the 2023 model is 208.1 inches long but rides on a longer wheelbase.

Beyond the bigger size and seats, there are a few other tweaks to the Defender 130. There’s a new, 130-only color: Sedona Red, an entrancing shade of rich vermilion. There’s also D130-exclusive four-zone climate control, which gives the driver, front passenger, second, and third-row each their own temperature choice. Air suspension is standard on all models, and in North America there is a choice of two inline six-cylinder engines. The higher-trim models get the familiar Ingenium Mild Hybrid (MHEV) setup, while the base model has the same motor without the mild-hybrid setup.

Defender 130 starts at $68,000 and climbs into the six figures for high-spec models. It’s now available for order at your Land Rover retailer, though expect delivery wait times commensurate with the current global situation.