On April 1st, the Montgomery, NJ EMS team took delivery of their new Defender 110 First Responder Vehicle from Land Rover Princeton – the only EMS team in America with a new Defender in their fleet. Thanks to winning the Defender Above and Beyond Service Awards contest, the new Defender was also free.

In early 2021, with Covid shutting down any remaining chance of a traditional Defender press launch, Land Rover turned to other ways to promote the new truck. Inspired by the work of first responders and other helpers during the pandemic, they decided to launch the Defender Above and Beyond Service Awards, which would award a free, fully-and-appropriately kitted-out Defender to one non-profit in each of seven categories: Coastal and Marine Conservation, Search and Rescue, First Responders, Animal Welfare, Fire Safety and Response, Urban Improvement, and Environmental. Non-profits were invited to send in videos to show why they were worthy of the Defender, and a public vote decided the seven winners.

Montgomery Township, New Jersey has grown significantly over the past few years, as farms have turned into more and more new housing developments. The town is now home to 23,000 people, up drastically from 9,600 in 1990. That’s taxed the Montgomery EMS (MEMS) team and fleet. With only two First Responder Vehicles in the fleet, and calls from people all over a large town, they’ve had issues keeping up with increased 911 call volume.

In the last two years, Covid-19 has increased their costs, too. With all the PPE and extra equipment they had to buy, as well as extra calls they made, the money had to come from somewhere – and since MEMS is totally volunteer-run and donation-funded, it had to come from somewhere else in the budget. As the crisis of the past two years piled on the squad, the costs ended up coming from fleet maintenance a lot of the time.

Montgomery is also in the floodplain of the Raritan River, and when a strong storm comes, the floodwaters rush in. When Hurricane Ida swept through Central Jersey in September 2021, several MEMS members lost their personal vehicles trying to attend to calls.

Brothers Tharun Potluri and Saahith Potluri decided that Montgomery EMS was in desperate need of a third rapid response vehicle, and that the Land Rover contest was a perfect way to try and get one. They made a video, presenting a solid case as to why they should win. When they made the list of finalists, they enlisted the entire town of Montgomery to vote for their entry. And in September 2021, they were announced as the winners of the new Defender.

In February, a few MEMS team members went down to The Biltmore in North Carolina, to join other Above and Beyond winners to meet their trucks for the first time and test off their off-road capabilities on Land Rover’s proving courses. After some outfitting with lightbars, sirens, and storage cabinets, the Defender made its way to New Jersey in late March in time for a handover on April 1st. 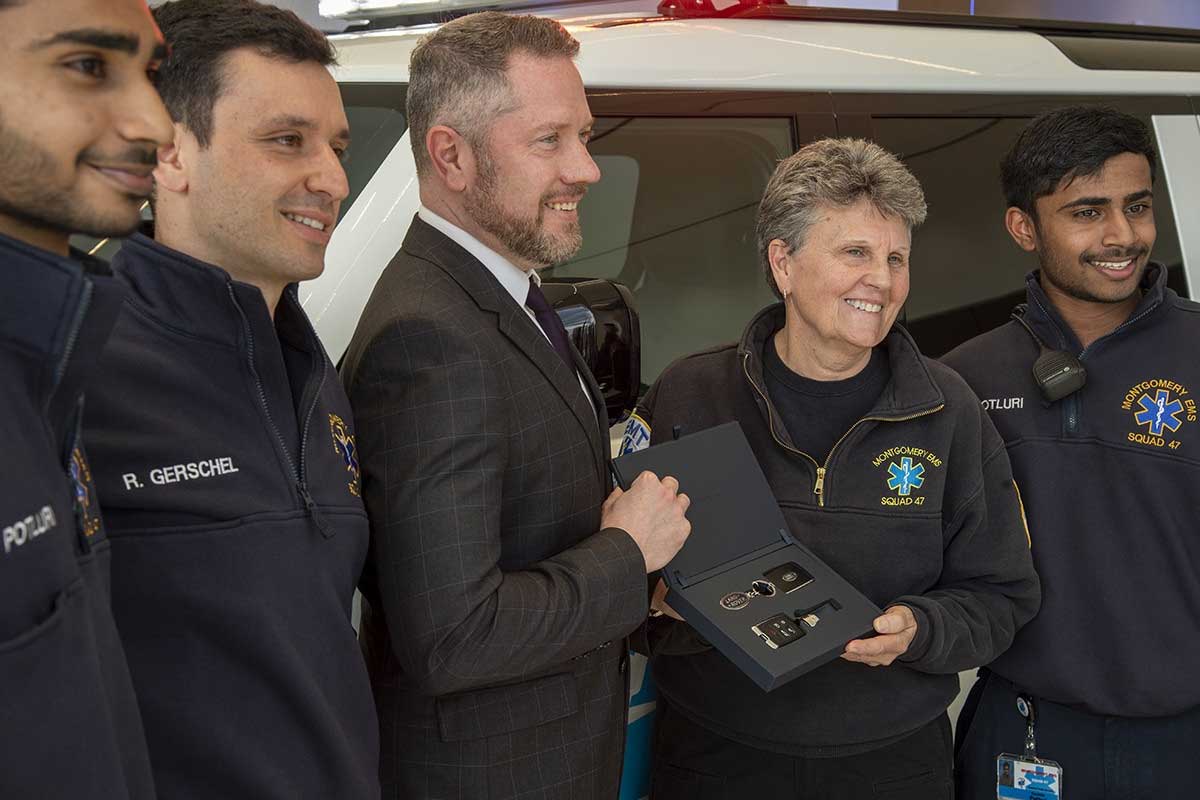 The awards trucks were all handed over at the nearest Land Rover dealership, which in this case was Land Rover Princeton. The dealership is located just over the Montgomery/Princeton line, just a few miles from the MEMS station house. With the Defender going to front-line community use, there was an extra sense of emotion in the air at the ceremony. Several Land Rover Princeton employees live in Montgomery and have gotten to know members of the MEMS team when they have responded to 911 calls for family members. Everyone realized this wasn’t just another Land Rover going off the dealership lot into the ether – this Defender was going to be a long-term part of the landscape of the community. 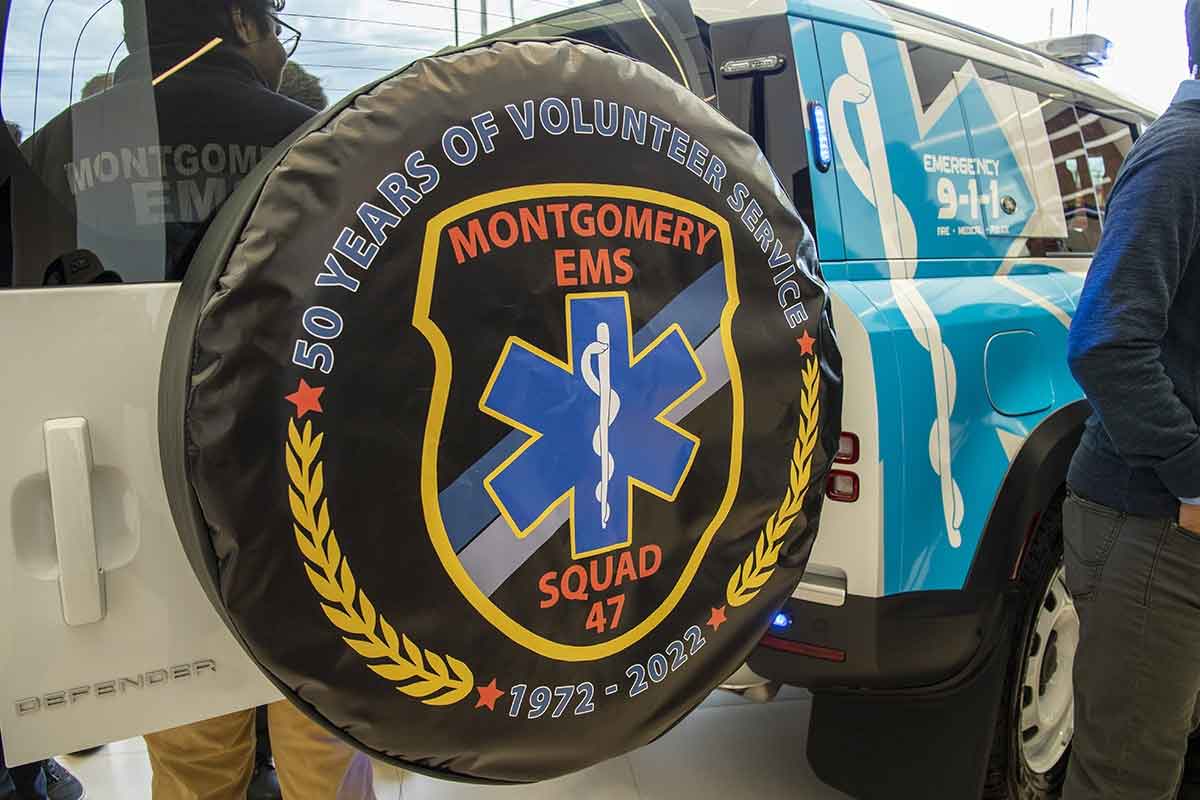 The entire MEMS team showed up at the handover – dozens of people bustling around the showroom on a sunny spring morning. The high school even let the student members skip school for the day for the moment, in exchange for a photo for the school paper. Among all the MEMS members checking out their new toy, there were representatives from Jaguar Land Rover corporate (headquarters is about an hour away in Mahwah, New Jersey) and Flemington Car and Truck Country, which owns Land Rover Princeton alongside many other dealerships in New Jersey.

After a few speeches, it was time for the moment we were all waiting for – pulling off the silks wrapping the Defender and seeing the new truck in all its lightbarred-and-liveried glory. As with all the Above and Beyond winners, Land Rover spared no expense in making sure the trucks were equipped exactly as they needed to be to do their job. The Defender has the appropriate lighting and sirens to comply with all the appropriate laws and regulations; custom built-in cabinets in the back to store supplies, defibrillators, and other tools correctly and safely; and all the right decals to make the Defender match the rest of the MEMS vehicles, including the vehicle fleet number on the front fenders – 47-FR1. There’s even a custom tire cover with MEMS’ 50th anniversary logo on it, commemorating service to the community since 1972. 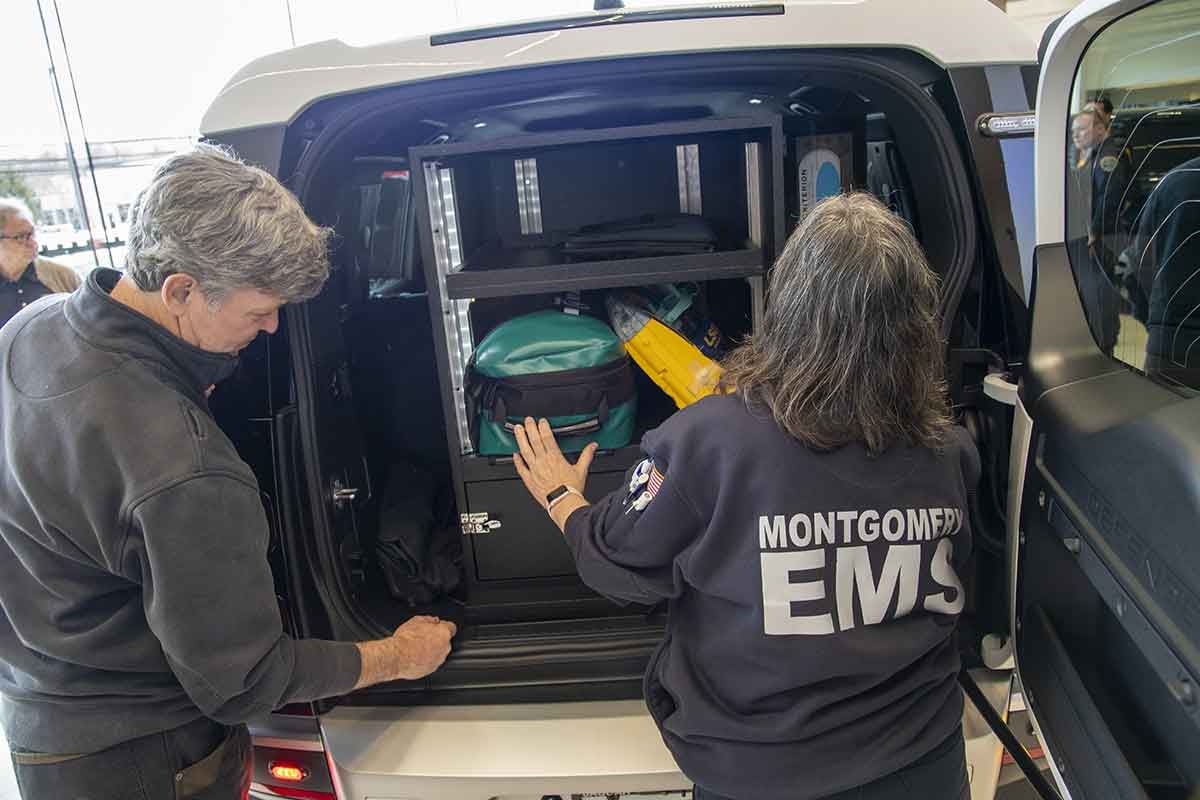 While Land Rover donated the vehicle and modifications, the team at Land Rover Princeton decided to throw a little something extra in and maxed out the extended warranty and maintenance plan on the truck. A generous gift worth thousands of dollars, that will help take a burden off MEMS, and allows them to focus their funding on maintaining their other vehicles. With fleet maintenance costs a huge reason that they petitioned for the Defender, it’s a double blessing to both get a third vehicle and not have to think about major maintenance costs on itfor many years.

After the ceremonies were done, the keys handed over, and the lights and sirens tested out inside the showroom, it was time for the squad members to check out their new toy. While this is the first Defender that we know of equipped for EMS use in America, the comments made it sound like it shouldn’t be the last. The voluminous storage, large cargo space, confident driving position, and technical capabilities of a Defender make it a great off-road and overland vehicle, but it also makes it a great first responder vehicle. And of course, EMS work isn't all about sunny days and paved dry roads. The next time the Raritan River floods the area in a storm, the 36-inch wading depth and all-terrain technology of a Defender should make it the first vehicle anyone on the squad grabs the keys for. 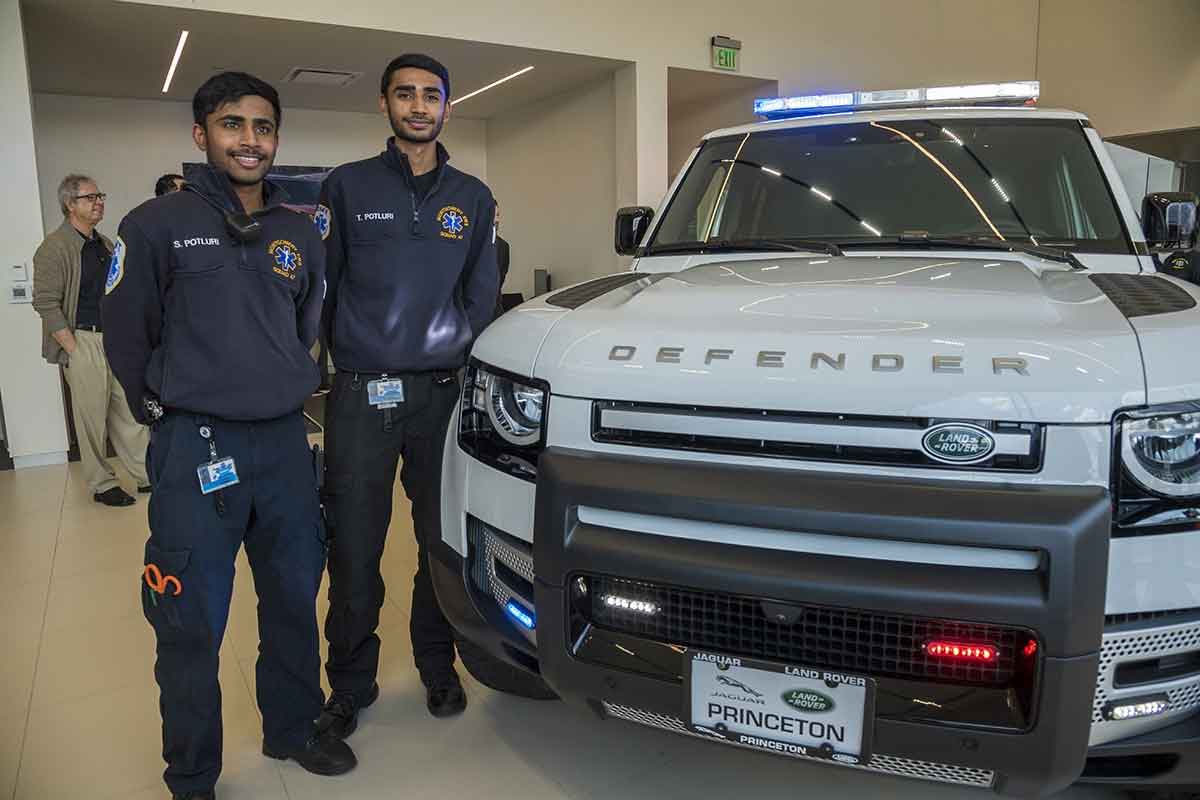 Perhaps the people most proud of the new truck were the Potluri brothers, who saw the video they made a year ago come out to something tangible for the squad they put so much time into. Unfortunately, it’ll be a few years before either of them can fully enjoy the fruits of their labors – neither of them is 21, the age you have to be to drive a First Responder truck per the squad’s insurance company.

After all the festivities were over, the cake eaten, and most people went home, it was time to take the Defender home. The license plates bolted on, MEMS President Carol Raymond drove the new truck a few miles to the squad building, ready and willing to enter into service to the people of Montgomery for many years to come.

Thanks to Montgomery EMS and Land Rover Princeton for inviting Roverlog to attend this very special handover ceremony. 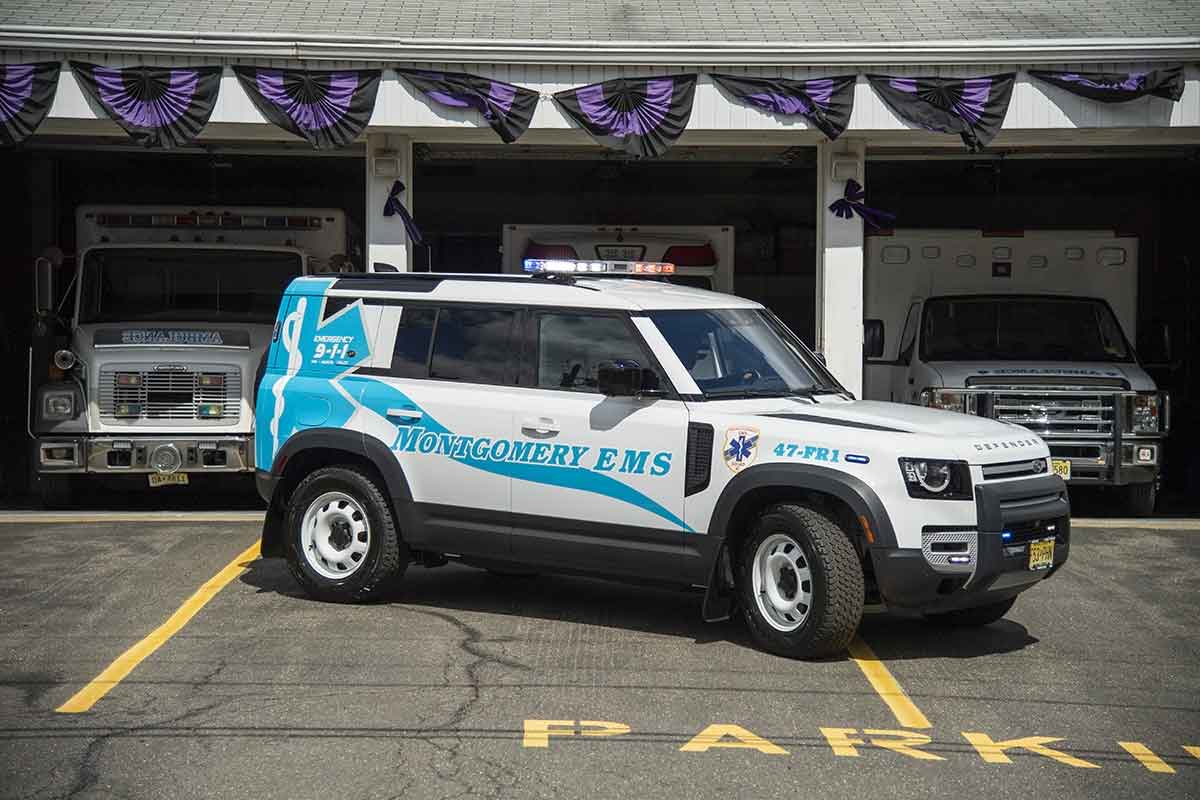