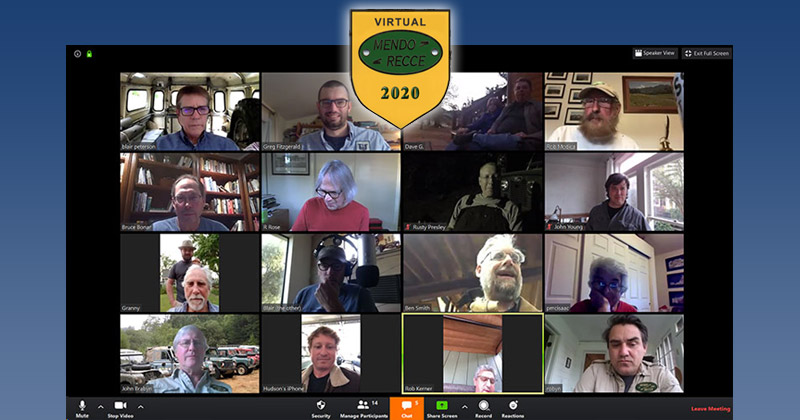 The last weekend of April usually means that Land Rover owners in Northern California are gathering for the annual Mendo_Recce Joe Lucas Not-a-Rallye event. For twenty-five years, "Mendo" has brought together a dedicated coalition of Land Rover lovers from the Bay Area and Northern California, as well as members further afield who drive or fly long distances to attend. Of course, like everything else right now, Mendo XXVI was not held at the usual time due to COVID-19. In place of the traditional gathering, though, a "Virtual Mendo" online event unfolded over the course of the weekend, using technology to create a digital event.

Mendo is a Land Rover club particularly close to my heart. Though I plant my flag firmly and unwaveringly in New Jersey, I've fallen in with this group of die-hard, old-school Land Rover lovers on the other side of the country. Going to Mendo has become an annual tradition of mine since 2017, whether it's a fly-in weekend trip or an 18-day double-cross-country road trip, and I consider the people my West Coast Land Rover family.

The group has endured longer than most other informal Land Rover clubs in North America, perhaps in part due to our steadfast dedication to keeping the same email newsgroup format we've used since 1994, as well as our aversion to any and all forms of leadership or formal organization. The first 24 Mendos were held at a remote campground in the Mendocino National Forest before the 2018 Mendocino Complex Fire wiped out huge swaths of the forest, which is still closed to most use. Long-time member John Brabyn has stepped up in the interim with the use of his 400-acre Salmon Creek Ranch in Bodega Bay, on the Pacific coast, and 2020 was set to be the second Mendo there.

We officially called off the on-location event at the end of March, with an intent to have a gathering in the autumn, if the situation allowed for it, and to reconvene at the traditional time in April 2021. A few days later, a member with access to a top-tier Zoom plan set up a recurring meeting for us to communicate on. Over the course of the past month, we've had a number of impromptu happy hours there. The main goal, though, was to use the meeting to replicate the traditional Saturday evening potluck that's always a Mendo highlight.

So, at 6 PM on Saturday, we logged into Zoom, drinks in hand, for a virtual event in place of our traditional gathering. People brought cocktails, or dinner, or dessert. Some of us set up fire pits, replicating those we might have set up if we were together in person. We had a contest for best backgrounds, virtual and real. The topics of conversation were more or less the same as we'd have had in real life -- a combination of tech talk, memories, and chatter. About twenty-five of us popped in and out, some for a few minutes and some for the whole time.

Was Virtual Mendo as good as being in California, camping with my friends in real life, wheeling our trucks with stunning views and challenges? No, it was not. I can assure you that for the next event we have, I will have my airfare booked as soon as we have a date. But it was certainly better than being at home moping all weekend about losing one of my favorite Rover events.

These are unprecedented times, never before seen in our lifetimes -- and hopefully never to be seen again after we get to the other side of it. This will pass, one day, and Land Rover clubs will once again gather around the world for their traditional rosters of events. But until that day comes, a virtual campfire wasn't that bad of a solution to having to skip a quarter-century-old spring tradition.

Rover enthusiasts interested in learning more about Mendo_Recce can visit their site here.