Land Rover is looking at green technologies beyond just battery-powered electric vehicles, with their first project to embark on a hydrogen power research program. The first test vehicle of this hydrogen fuel cell electric vehicle (FCEV), a Defender, will be on the road later in 2021.

Hydrogen fuel cell vehicles combine the benefits of EVs as we know them with the strengths of gasoline-powered cars and gas stations. Hydrogen is a denser energy source than batteries, and it’s easier to fill a car with hydrogen than charging an EV…in fact, it can even be quicker than filling up a car with gasoline in the current tradition. On the environmental side, the power from the hydrogen fuel cell can power electric motors, and the only tailpipe emission is water. There’s also a minimal loss of range in cold temperature environments. These conditions benefit the traditional use case of a Land Rover, in ways that EVs cannot at this time. Also, for those who are nostalgic for the sound of an internal combustion engine, a hydrogen-powered vehicle makes more noise than an EV.

The system works by combining hydrogen, stored in high-pressure onboard tanks, with fresh air from the intake. The two are mixed, creating a chemical reaction with the result of energy and water. The water is jettisoned out the tailpipe, and the energy is harnessed as electricity which powers electric drive units at the wheels, similar to an EV. 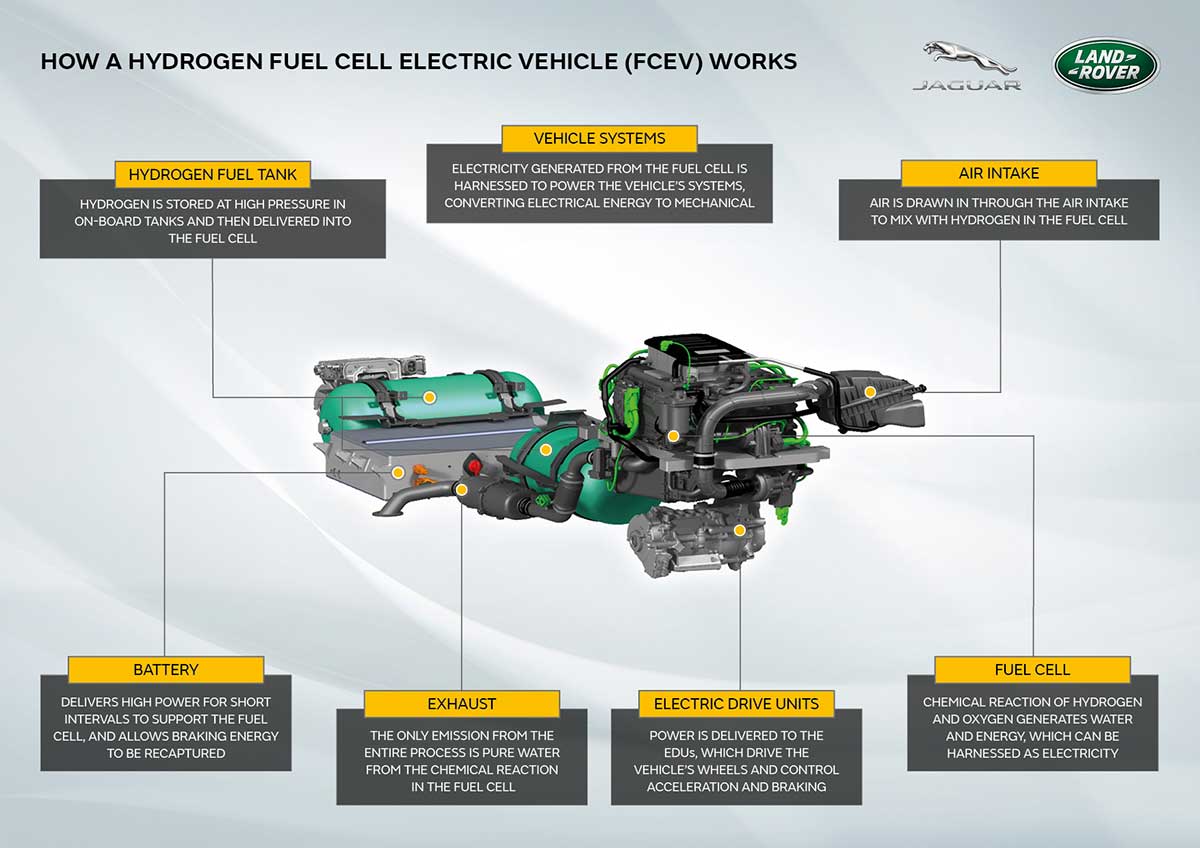 Hydrogen-powered vehicles have been a less-focused-on part of the green vehicle story, compared to plug-in electric vehicles. The hydrogen filling station network is still small globally – it has grown 20% since 2018, a period in which the number of hydrogen-powered vehicles has doubled. However, the fuel network is still sparse, and in the United States, they are heavily concentrated in California, where several hydrogen vehicle trials have been run by Toyota, Honda, and Hyundai. By 2030, Land Rover expects a global fleet of 10 million hydrogen vehicles, with 10,000 refueling stations globally.

JLR’s project is known as Project Zeus, and is designed to see how hydrogen power can benefit the expectations of the public, particularly those who use their Land Rovers to the fullest of their potential. Range, ease of refueling, towing capacity, and off-road capability will all be tested.