In 2010, some Canadian adventure motorcycle enthusiasts planned an informal rally across Eastern Ontario, which they dubbed the Roaming Rally. Twelve years later, the tenth running of the event brought forty 4x4s of all marques and forty motorcycles together to explore a network of idyllic backcountry roads within spitting distance of Canada’s national capital.

The 2022 Roaming Rally was a long-awaited event, effectively the double-postponed 2020 event. The rally is usually a relatively low-key affair, with just enough terrain to challenge you, but with a reasonable expectation of driving around 200 miles a day on gravel and dirt and still getting to camp in time for drinks and dinner.

But Mother Nature tossed a spanner in the works this year, ripping a seam of sudden and catastrophic “thunder cell” storms across the province from Toronto to Ottawa five days before the event began. The effect was something like a tornado, and it left trees down and power out across the province. It also had the effect of turning Roaming Rally 2022 into Camel Trophy 2022: Ontario.

I went to Roaming Rally with my friend Ryan Carman, in his well-kitted Discovery Series II. Ryan and I had never actually met in person before this weekend, but we’ve been good friends over the past two years. At the beginning of the Covid lockdowns in 2020, the Ottawa Valley Land Rovers (OVLR) club replaced its monthly in-person social with a virtual meetup, which Ryan ran. The virtual meetup started out of necessity and grew to the point where OVLR now sustains two monthly socials – an in-person event at The Prescott, a classic tavern in Ottawa; and the virtual event, which draws regular attendance from further afield, including regular attendees from as far as New Jersey (me) and Manitoba. Now past the need for virtual events due to the pandemic, the Virtual Social now stands as its own friend group and event.

A few OVLR members attended Roaming Rally, and it was a chance to finally put some faces to names after two years of our regular video call. Out of the 40 trucks in the event, seven were Land Rovers, mostly from OVLR and the Land Rover Adventure Association of Ontario in the Greater Toronto Area. The Land Rovers had three Discovery Series IIs, a Discovery I, and several Defenders. The rest of the field was your usual mix of 4x4s: Toyotas, Jeeps, Nissans, and some pickups, as well as some oddballs like a Pinzgauer.

We started the event with a group camp at Rideau River Provincial Park, due south of Ottawa about halfway to the American border. Here, we gathered the Land Rovers in a corner, quickly setting up camp before an all-night deluge of rain rolled in.

The first day’s run headed west, following the Rideau and Tay Rivers in a deluge through some deep water crossings and the small towns that pockmark this region. We crossed historic bridges and drove through quaint town centers before getting to the relative metropolis of Carleton Place, where we did a final restocking. 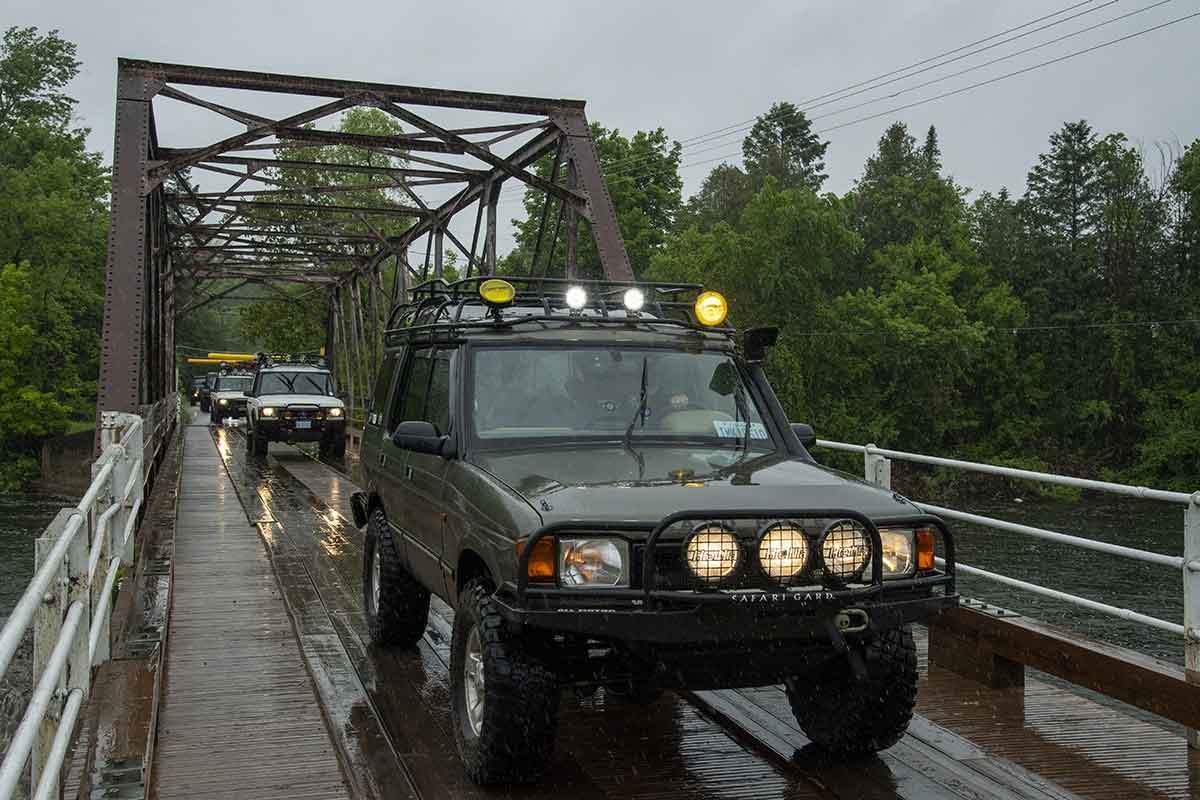 The next stage of trails took us down a long stretch of power lines (or as most Canadians call them, Hydro lines -- a huge chunk of Canada is supplied with hydroelectric energy), which was an arduous journey of rutted tracks and deep water crossings. These paths were cut long ago and are mostly maintained when there's a need to do work on the lines. With the recent storms and soft ground, there was a further element of drama, and we even came close to rolling one truck. 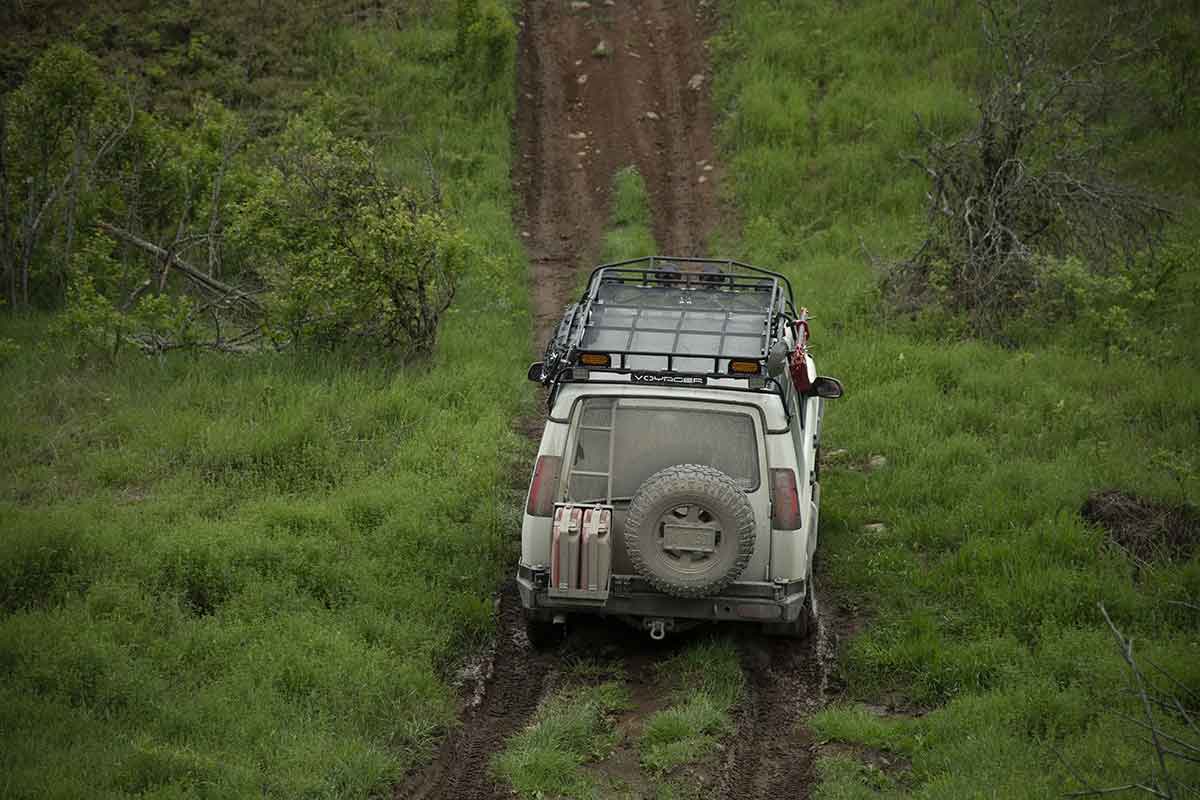 Next up was a series of deep water crossings. The hydro companies maintain a gravel bed at these crossings, but if you fall off of that bed, your truck will soon find itself buried in eight feet of swampy lake. The firm beds go straight across, so you aim your wheel, build a strong bow wave, and do not turn, even as the water goes up to the hood. We did several crossings like this -- honestly, if you like to get your car wet, I haven't off-roaded many places where it gets better than this. 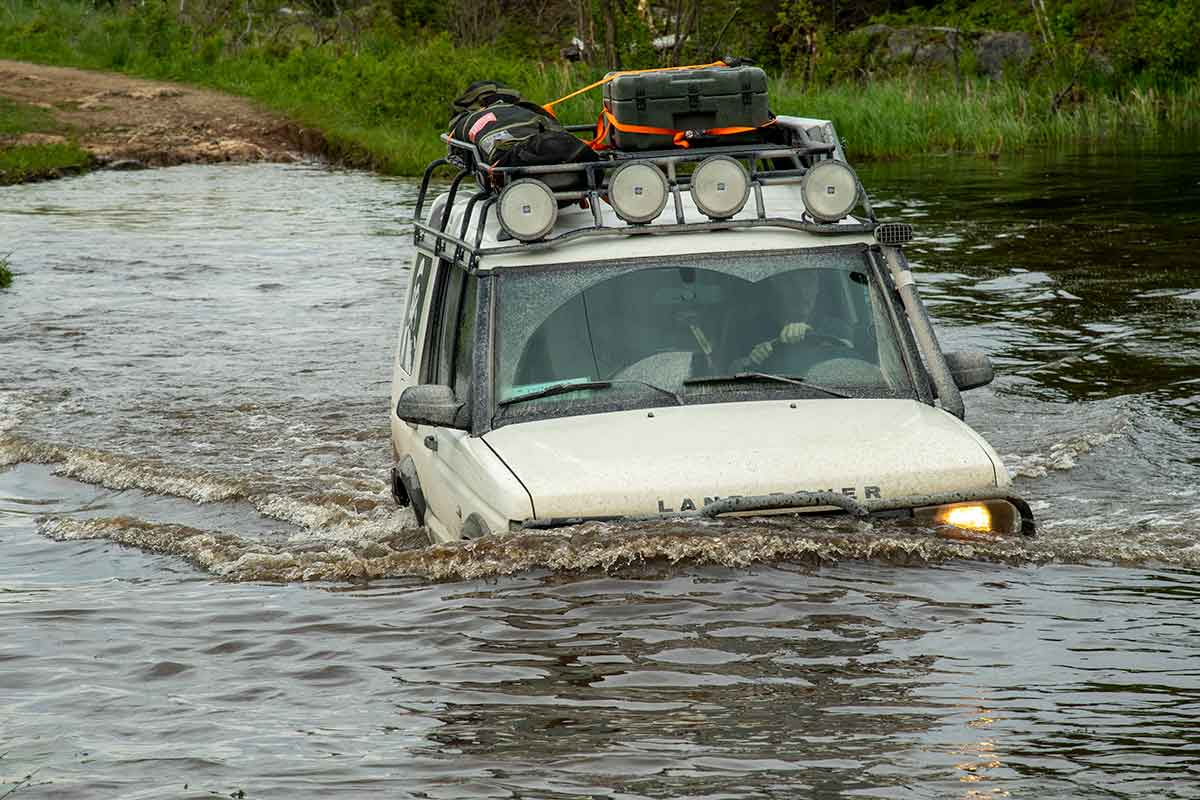 The first day's route ended with a stretch of gravel roads through farmland and idyllic scenery that really made it hit home how much this area of Ontario is critical to Canada's agricultural production. The architecture geek in me loved noticing the differences between farmhouses here and just a few dozen miles away in New York State. 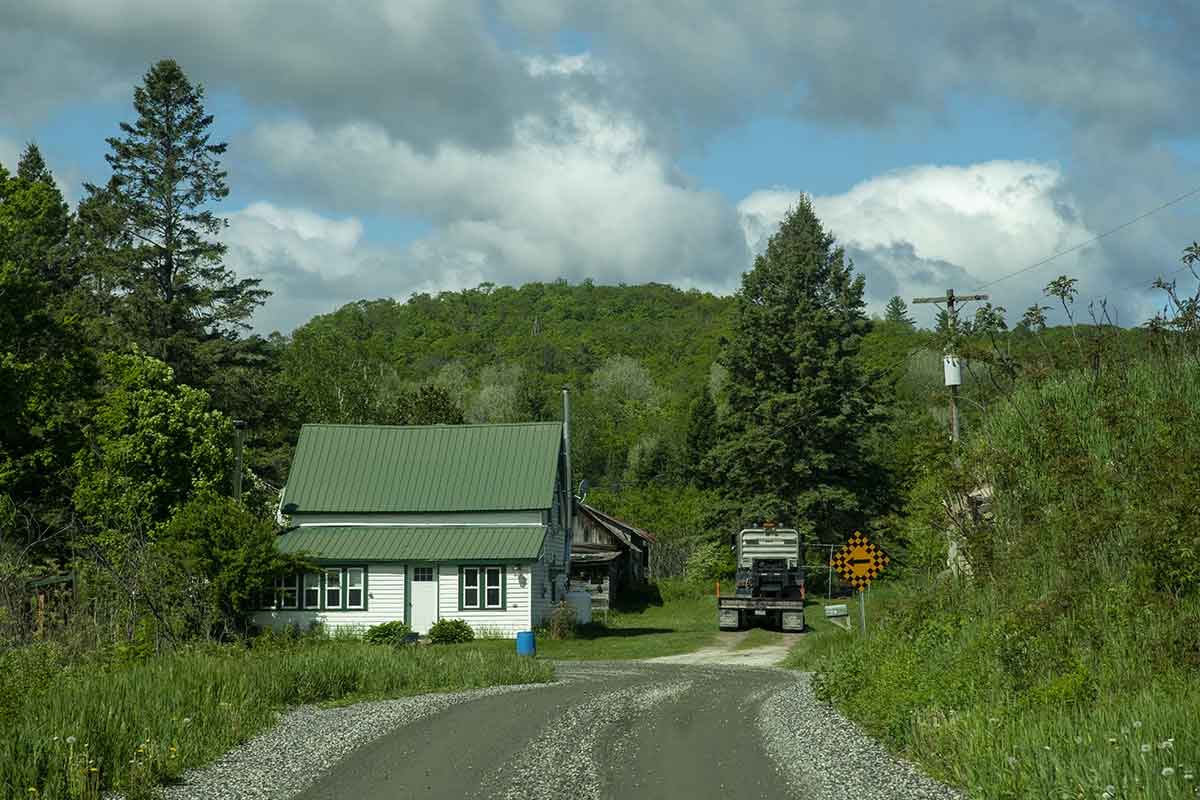 We set up camp for the next two days in McDonalds Corners, which meant that Day 2 was a loop further to the west. This route would focus heavily on the K&P Rail Trail, a multi-use trail along the route of the old Kingston and Pembroke Railway, abandoned by the Canadian Pacific railway between the 1960s and 1980s. (Notably, the railroad never actually made it to Pembroke, stopping short in Renfrew where the business case for building it ended.) Though some of these trails had already been cleared of downed trees by local landowners and authorities, the Roaming Rally route took us to some remote areas that had yet to be tidied.

Right after the storm hit, the organizers emailed everyone and told us to bring chainsaws, and what ensued on Saturday was a Battle of the Blades as a dozen chainsaws made quick work of the downed trees. As soon as the first group hit a blockage, the entire convoy stopped, and by lunchtime, the entire rally had coalesced into one big convoy, stretching almost a kilometer long. At each downed tree, the sawyers gathered and worked in choreographed organization, communications flying back and forth in both English and French -- sometimes a mix of both. Those who weren't cutting steered clear of the saws and swiftly cleared brush and logs away to make a path for the cars to go. Honestly, until this moment, I never quite understood how the Camel Trophy made so much progress through the tangled jungles and forests, but then I realized the power of teamwork in getting a convoy to move. 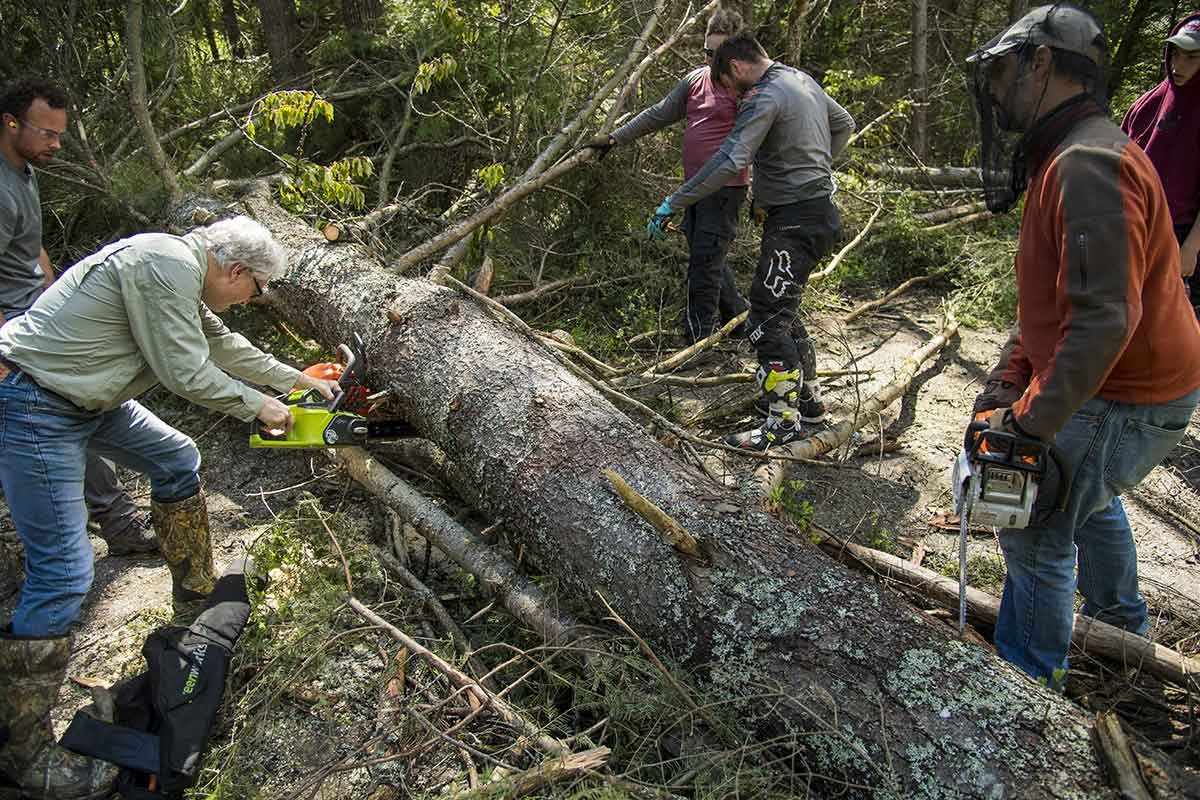 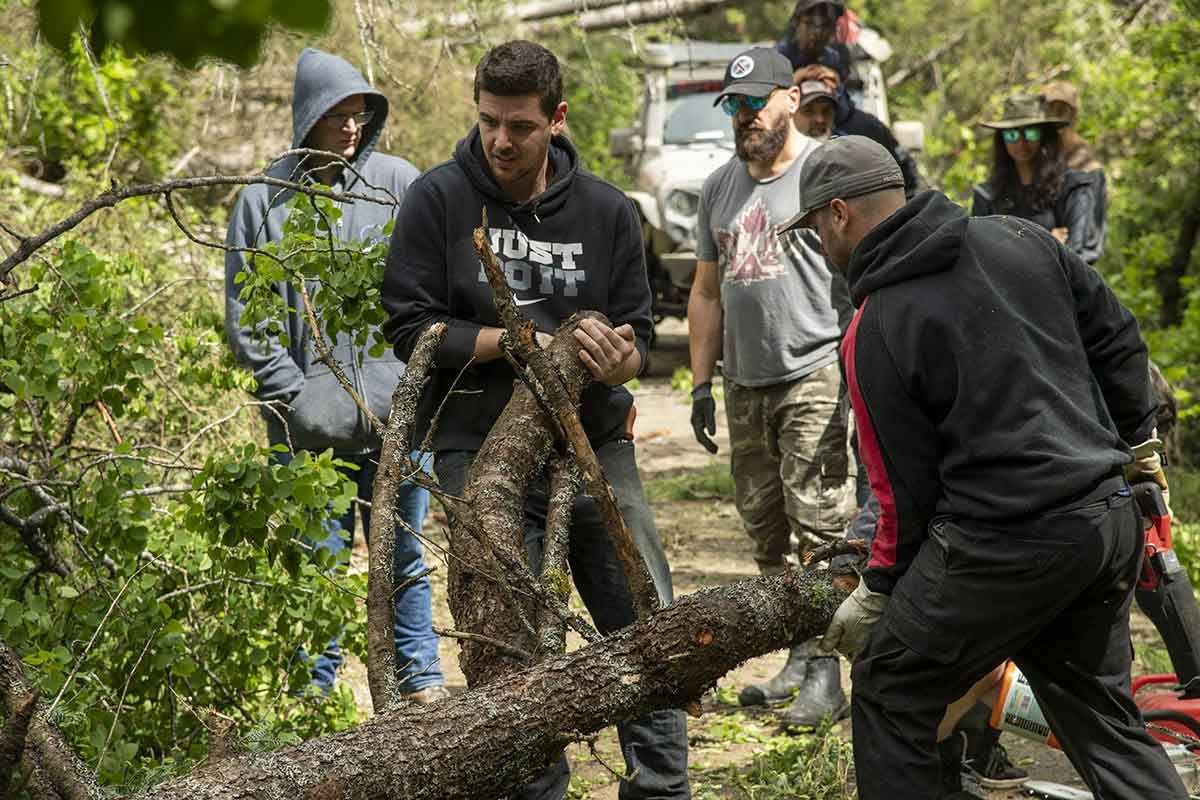 Eventually, everyone got tired of chainsawing their way through the forest, and at the next road, we decided to bail for some on-road exploring and meander back to camp. The Camel Trophy is long over, and none of us would have qualified anyway, so the entire exercise was starting to feel a bit moot. Back at camp, we cleaned up, made dinner, and had a fantastic night of swapping stories around the fire.

Sunday's route marched to the American border mostly over gravel roads, and since I still had some things to do in Canada before I headed home, we skipped the last day. (After all, gas isn't cheap these days, why double back?) But I'd really had an excellent experience at Roaming Rally, weather and conditions be damned. It was fantastic to see a little more of this area than I'd seen in previous years attending the Ottawa Valley Land Rovers Birthday Party events and get a sense of some real Canadian "cottage country." It was also fun to do a mixed-marque event since so much of what I do is Land Rovers only -- though a mixed event that was almost one-fifth Land Rovers wasn't a bad showing for the Green Oval. If you're looking to have some fun exploring a neat, natural region that most people in the United States don't even know is there, it's worth keeping an eye on Gravel Travel's website and prepping for Roaming Rally 2023.