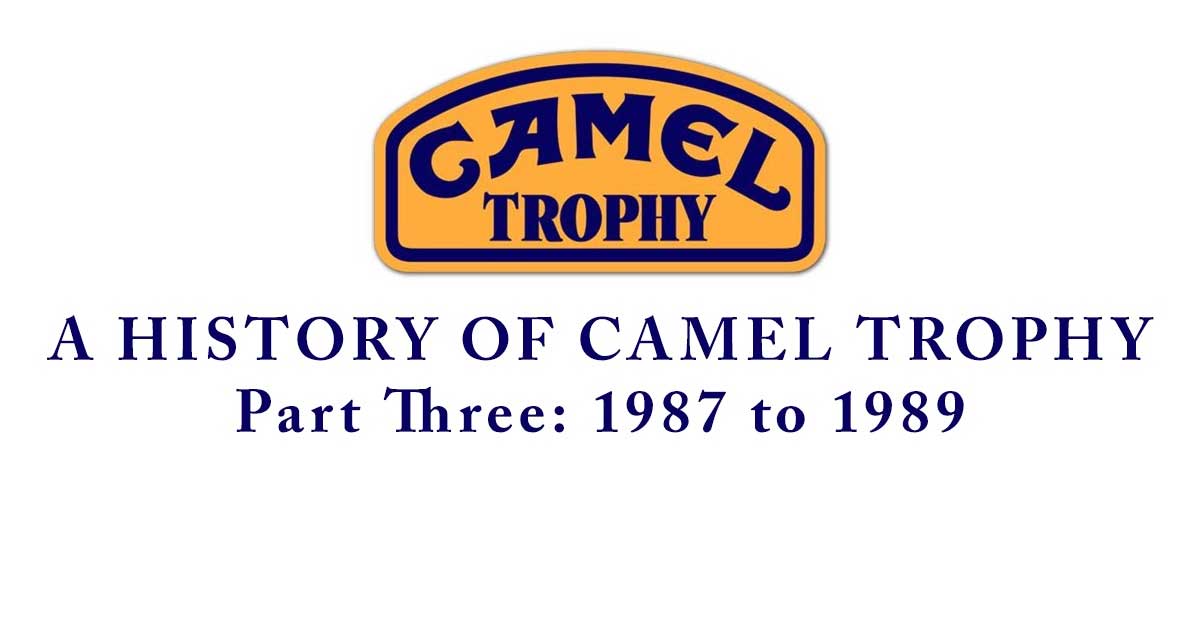 The late 1980s would be a sort of "Glory Years" for the Camel Trophy, hosting some of the most iconic iterations of the event. With the Camel Trophy now an extremely popular global event, it also drew better and better teams. Many of the participants in these years would go on to have major roles in the off-road and Land Rover community. It would also feature the only British win ever in the 1989 event, a win for which the victors remain celebrated 31 years later. 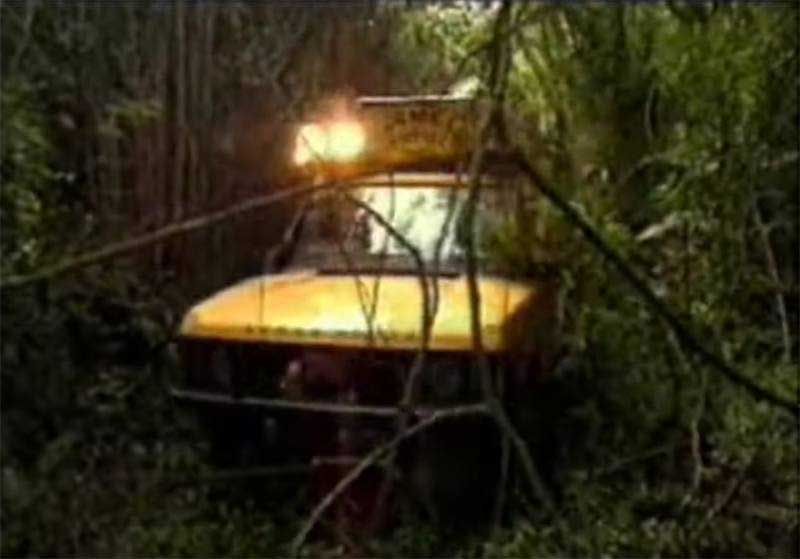 1987 brought the Camel Trophy back to Africa, or more specifically to the large island nation of Madagascar off its eastern shore. This year would feature a revival of the Range Rover as event vehicle, after its brief appearance in the 1981 and 1982 events. This time, instead of being powered by the venerable Rover V8, it used the new Italian-built VM Motori turbo diesel.

The American team this year would feature two people who would become intrinsic components of the relaunched Range Rover North America (RRNA), which began sales that year. Tom Collins, a Coloradan, would end up on RRNA's events and instruction team, and two years later would plan the iconic Great Divide Expedition that launched the upgraded 1990 Range Rover. He would also get heavily involved in future Camel Trophy team selection and events. Don Floyd would become one of Land Rover's top driving instructors in the Land Rover Experience program. On the British team, Iain Chapman would soon become Camel Trophy's Event Director.

Camel Trophy would make a full transit of Madagascar, from Diego Suarez/Antsiranana in the north to Fort Dauphin/Tolagnaro in the south. It was the first-ever north-to-south transit of Madagascar's eastern coastal route by vehicle in the country's history. It was a 1,400-mile endeavor, taken over 16 days. Over that distance, the terrain changed wildly, from the northern Equatorial region's tropical rainforests to a parched savannah in the south. The tracks were massively difficult to traverse, with some unused for decades before the Rangies rolled in.

The event would be slightly tarnished by one of the few scoring conflicts in the event's history. At this time, the special tasks were still run by amateurs, and were designed somewhat on a whim along the course of the route. In Madagascar, they were planned without any cohesive scoring system, way to rank victors, or major preparation. This led to a number of disputed results, and towards the end, led to an almost-mutiny among participants. The only teams that stayed completely out of the fracas were the Americans and British -- perhaps smartly, considering the future the participants from those teams had. By doing so, however, the Americans were kept from winning the event, which by all other measures it was seen they deserved to have done. This did however lead to the professionalization of event marshaling in future years.

The Madagascar event was another turning point in Camel Trophy's growth, and certainly, the images of these Range Rovers traversing the country were helpful as the iconic truck landed in America the same year. It would be the Range Rover's last hurrah in Sandglow yellow paint, but what a way to go out! 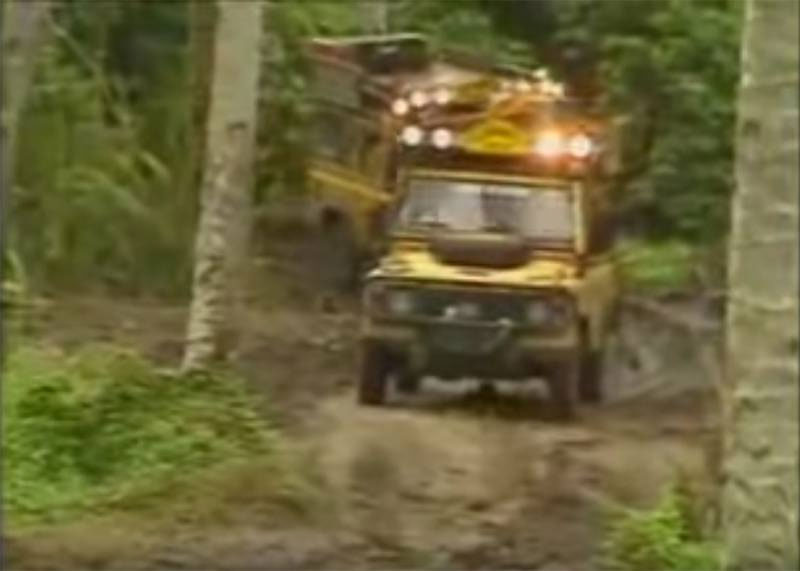 The Camel Trophy returned to its favorite haunt of Indonesia in 1988, this time tackling the island of Sulawesi. Situated to the east of Kalimantan, where Camel Trophy's last Indonesian adventure had taken place, Sulawesi offered another appropriate challenge for the event.

After the chaos the year prior with the special tasks, this year they were professionally organized and clustered at the beginning and end of the event. The overall event was twelve days, with two days of special tasks at the start and finish bridged by eight days and 1,325 miles of driving. The route went from Manado in the northeast of the island, around its curved northern extremity to Ujung Pandang in the southwest.

The route was full of unfortunate mishaps, with rollovers by the German and Dutch teams. The Belgians punched their wheels through a bridge they were crossing and sat the 110 on its frame, ceasing forward progress. The Turkish team found their Land Rover in a river after a bridge just straight-up collapsed on them. The British fought constant differential issues and often were not able to drive in four-wheel drive.

The roads were again often unused, but pre-existing, and lots of time would be spent recovering roads the jungle had taken over in just months. Chainsaws roared, bridges were lashed together, landslides were dug away. Some tracks were scarcely wider than the 110s, requiring delicate handling. It was all in a day's work for the Camel Trophy, really.

The Turks would end up taking the Camel Trophy this year, remarkable as it was their first appearance in the event. The British team of Jim Benson and Mark Day took home the Team Spirit award. Once again, the event had been a full transit of the island, and a rousing success. 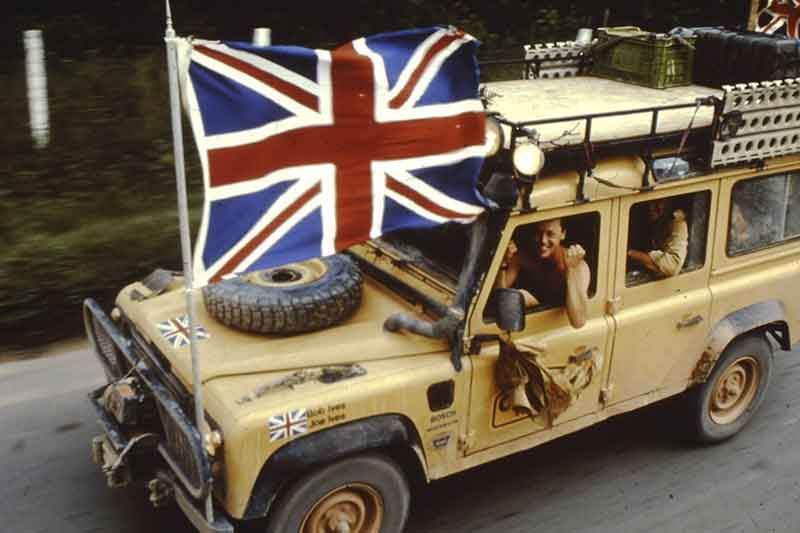 The 1989 event is by most accounts the absolute pinnacle of Camel Trophy. This year had everything: the return to Camel Trophy's ancestral home in Brazil, one of the most difficult routes in the event's history, the final year of the One Ten's use as competition vehicle, an event in the fullest of its global popularity, and the only win by a British team ever. Unbeknownst to anyone at the time, Camel Trophy was halfway through its existence at this point, and to some, every event in the 1990s was a decline from this event, until Land Rover's involvement in Camel Trophy came to a lukewarm end in 1998.

The event began in Alta Floresta, in the Brazilian state of Mato Grosso, and ended in Manaus. As such, it linked with the 1980 and 1984 events to create a continuous path across the Amazon by Camel Trophy: Belem to Santarem in 1980, Santarem to Manaus in 1984, and now Alta Floresta to Manaus in 1989. The event was planned in the rainy season, to increase challenge and misery. The route generally followed Brazil's highway BR-163, which is a manageable dirt track in the dry season and a muddy quagmire in the rainy season that can trap trucks for weeks or months on end. The locals found the concept of the Camel Trophy trying to make it to Manaus on this route so laughable that they took up betting on its failure.

The mud made the trek absolute hell. There were days that the entire convoy would cover only a few miles, constantly winching vehicles between each other. One day ended covering just 800 meters of progress after a full effort of hauling with Land Rovers and tractors.

The convoy fought their way to Santarem on the highway, then took a barge down the Amazon to Itapiranga, several hundred miles west on the northern shore of the river. From there, they continued to Manaus and the finish. Once again, the transit portion of the event was bracketed by special tasks.

The winners would be the British team of brothers Bob and Joe Ives. They would be the only British winners of a 4x4 competition defined by the most iconic of British 4x4s. Their feat made them legends around the world, and likely the Camel Trophy winners with the most enduring fame today, decades after the event ended. Upon their return home, they were awarded the Segrave Trophy by the Royal Automobile Club, which is awarded to the Briton who has shown "Outstanding Skill, Courage and Initiative on Land, Water and in the Air." The list of recipients is a who's who of British exploration and motoring in the modern day.

In every way, 1989 was the high water mark of Camel Trophy. The early 1990s would retain the magic and popularity of Camel Trophy, with the new Discovery taking its place as the definitive team vehicle of the event, inspiring a new generation of Land Rover owners. Although the early 1990s would retain the spirit of the great 1980s events, by the middle of the decade the event would be in decline, softening to appeal to new demographics, before Land Rover would sever their ties with the event in 1998. But when the Ives brothers stood on the podium in Manaus, nobody saw that coming.

Look out for our next part of A History of Camel Trophy, where we will focus on the early 1990s events defined by the Discovery.