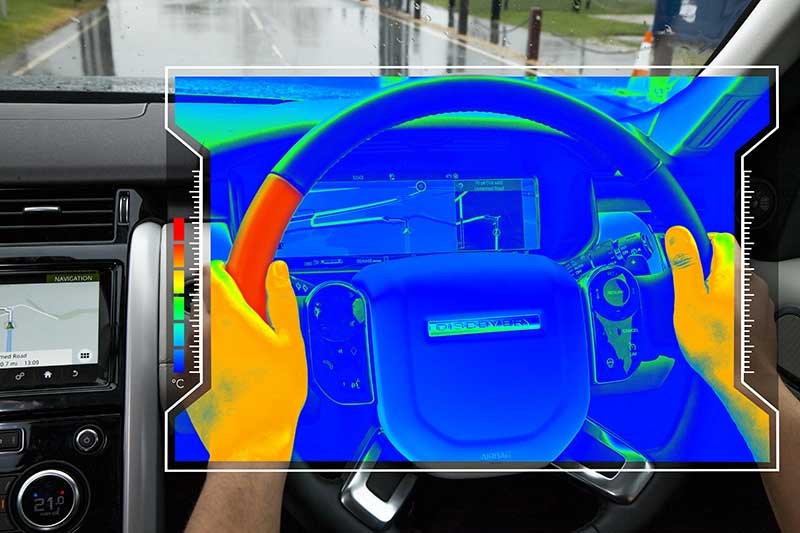 Many modern Land Rovers come with heated steering wheels, but what if they could be used for more than just warming your fingers on a cold day? What if this luxury feature could be used to prevent distracted driving and make roads safer? That was the latest question asked by Jaguar Land Rover and their partners at Glasgow University, who JLR have been working with for a while now on new ways that cars and drivers interact.

The new concept uses temperature controls in the wheel to warn drivers of hazards, but not critical ones that would require a more substantial and time-sensitive warning. For instance, when navigating, one side of the wheel could be heated to clarify which direction you should turn at the next intersection, and give you enough warning to change lanes in time on a highway to take the correct road at a split. On a road trip, it could suddenly cool down to let you know that there's a roadside attraction coming up. When you're just starting to run low on fuel, it could change the temperature to get you started thinking about making a stop.

As JLR starts to build on their autonomous vehicle programs, they could also work the technology into the paddles on the steering wheel, which could be used to signal a transition from human-controlled to autonomous driving.

The theory is that a temperature change is itself less distracting than a noise, or even a haptic feedback vibration. Anything that was signaled only by the temperature-controlled wheel would be a non-critical warning. It could be paired with haptic and audible warnings for more critical events.

For now, this will probably remain one of the theoretical projects which come out of JLR's research divisions. They have partnered with the University of Glasgow and the Engineering and Physical Sciences Research Council (EPSRC) for many years on these projects. Although they may never make it into the marketplace, these partnerships allow JLR to work with budding automotive engineering talent to create a stronger future engineering force and spark the beginnings of new developments in automotive technology.

This particular project was the focus of Patrizia Di Campli San Vito, a Ph.D. student at the University of Glasgow, guided by professors Dr. Stephen Brewster and Dr. Frank Pollick. Ms. Di Campli San Vito has also worked on projects regarding haptic feedback in steering wheels, and using assistive technology to help deaf and hearing people communicate. Her portfolio and the abstracts of her various projects are on her Google Scholar profile.