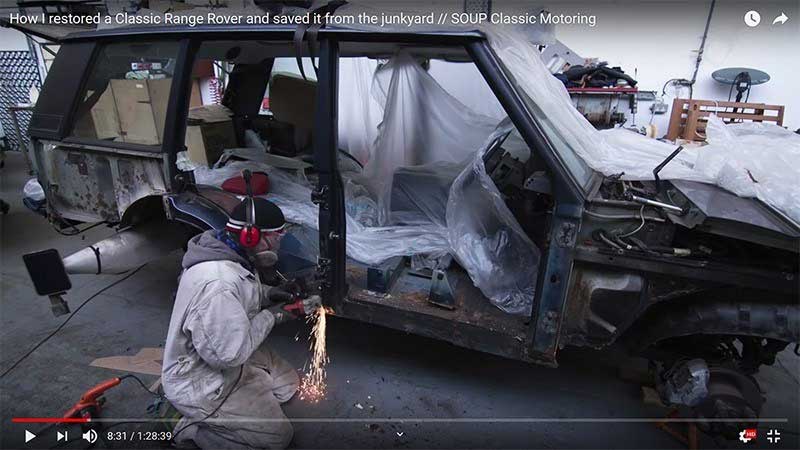 Now that Range Rover Classics have risen in monetary value from "their weight in scrap metal" to "I wish I'd bought dozens when they were only worth their weight in scrap metal," lots of attention has turned to restoring these magnificent, mildly-complex, extremely rust-prone iconic 4x4s. If you've ever taken the wings off of an RRC and seen the rot that lies beneath, you know what I mean. So does George Karellas, who just finished a three-year restoration on his rusty Classic, and made a 90-minute stop-motion video of every single step to celebrate.

Karellas' truck -- an Irish Vogue SE model, approximately equivalent in specification to the average North American Specification Range Rover Classic -- had all of the rust you usually see on a truck in the wetter, saltier parts of this continent. The sills, the headlight boxes, the rear cross member, the wheel arches, the pillar bottoms...it's all achingly familiar to so many of us.

The video shows him disassembling the truck, screws disappearing one by one. Then rust is peeled away, templates are made, patches are fabricated. He fabricates a new bottom for one of the pillars by making a complex cardboard template, copying it onto sheet metal, and banging it into form, using the edge of a piece of wood as a metal brake. The plastic sheeting covering the truck is wrapped and unwrapped over and over, the light from outside changes its tone from season to season. Spot welds are drilled and plugged over and over again. Slowly, but surely, the Rangie comes back to life.

These trucks aren’t simple to restore. I know, because I’m in the middle of rebuilding a similar basket case: a former junkyard 1994 Range Rover County LWB from Georgia. It has no major rust, but it makes up for that in other places. They're complicated, often even confounding. New features and systems were added by tossing a computer and tangle of wires in the corner of the dash. Rust forms in hidden places, leaving a surprise when you pull up a bit of carpet padding.

But at the end of the day, it’s worth it, and there’s something cathartic about saving a magnificent, iconic piece of machinery that was otherwise doomed to oblivion. Every trim piece I clean up, every screw I replace, every part I upgrade, gives me the sense of making something greater. Karellas seems to feel the same way, from the shorter updates on the project he’s given over the years on his Soup. Classic Motoring YouTube channel, and the care he put into showing the details of the project in this compendium video.

I’m only a year into my rebuild, with intentions, probably in vain, to have the truck on the road by the end of 2019. This video is just as useful for me as inspiration to keep going. With a little tenacity, the willingness to learn new skills, a few thousand dollars, and a rational timeline, anyone can bring one of these trucks back to life. Restoring a 1990s Land Rover is a massive task, but to the almost one million people who have viewed the film in the past week, perhaps they realize how incredibly rewarding it can be. The magnificent Range Rover Classic is getting its due.