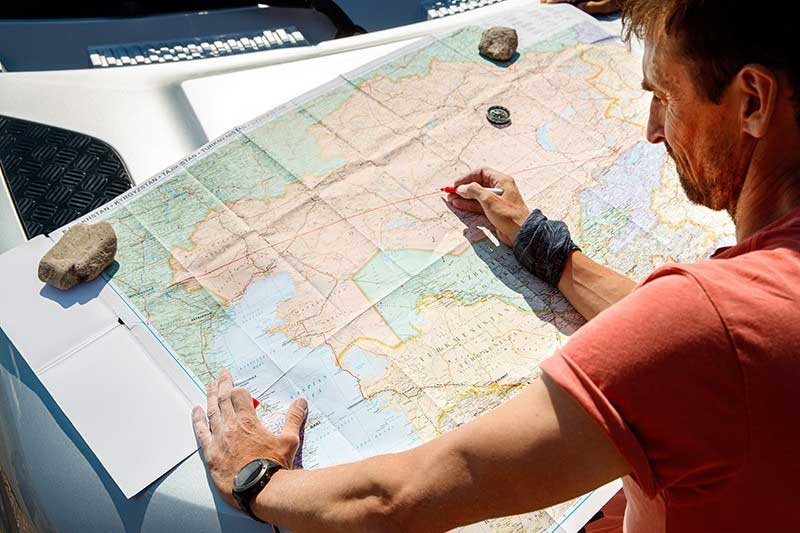 The biggest question mark hanging over the New Defender is, “how can it handle an expedition?” The old one (and its predecessors) has conquered every corner of the world for the past 71 years, and more than anything, the new one has to be able to survive and thrive in this domain. Land Rover seems to be trying to put the kibosh on any doubts of the new truck’s ability from the get-go, with “Expedition 001,” taking it from Kazakhstan to its Frankfurt Motor Show debut.

The expedition starts in the Valley of the Castles in Kazakhstan, a section of the Charyn Canyon near the Chinese border. It’s one of the most landlocked places in the entire world, over 1,000 miles from the ocean. The Defender begins its journey to Frankfurt here, with a quick 15-second clip showing it winding through the 300-meter spires in the Valley of the Castles.

It’s still a little unclear if Expedition 001 is just some PR material filmed in Kazakhstan, or if the vehicle is currently being driven across Asia and Europe to Frankfurt on Tuesday, September 10th. Understandably, Land Rover isn’t exactly live streaming the potential adventure to keep things under wraps as much as they can until the launch. If there’s a 4,000-mile expedition underway right now, I’d think major reporting will come after the fact.

One of the ambassadors for the new vehicle is British mountaineer Kenton Cool, who’s seen climbing rocks in the Valley in a second video clip and driving the truck towards Frankfurt. Cool has summited Everest 14 times and has a litany of achievements in the Greater Ranges of Asia. He’s also led several expeditions with Sir Ranulph Fiennes, a major supporter of Land Rover over the years.

It’s a good omen for the marketing direction for the New Defender though. Land Rover does consider the original to be an iconic adventure vehicle that brings an air of legitimacy to the entire brand, and the new one embarking on a marketing adventure from the get-go is a good sign. There's a huge legacy to live up to, but they've already shown that they are interested in retaining their conservation, Red Cross/Red Crescent, and adventure ties with the new truck.

Meanwhile, we’re just days away from a New Defender, a vehicle that is decades in the making. Soon, we’ll know what it looks like, what it costs, what it comes with, and what accessories you can bolt onto it.