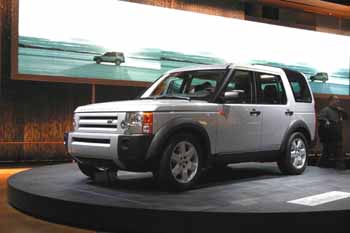 The next generation Land Rover Discovery is officially on its way for the 2005 model year release in Fall 2004. Call it the Discovery III - or the LR3 (as it will be called in North America where alpha-numeric vehicle names are all the rage) - either way, “an absolute priority was to ensure that nobody could mistake this vehicle for anything else…” said Geoff Upex, Land Rover’s director of design. “It had to look thoroughly modern, bold and distinctive” he said, but very definitely a Land Rover.

The Discovery LR3 is distinctive, alright. Distinctively Range Rover, that is, with a front grille that comes straight off the new Range Rover and those wacky “eyes”, the interlocking headlamps that are evidently Rover’s new front-end design standard. The side profile, however, is all Disco. Those alpine windows still form a stepped roof, but are integrated into the side windows. And there’s big news at the rear window – no more spare to get in the way! The new tailgate is now free to split into two, with the lower half repeating the stepped design of the roof. This gives you a shallower entry into the rear cargo area with the tailgate down, so you have access to its deepest recesses without having to climb in.  (The spare is, of course, hidden under the floor where it belongs.)

It’s nice to know they didn’t get rid of any of the “good stuff”: the command 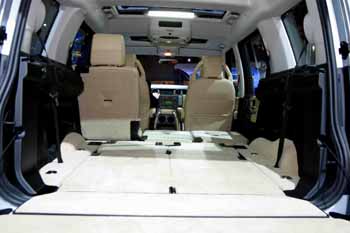 driving position, the stadium-style seating with room for 7, the headroom and airy cabin environment. But now, the Land Rover Discovery III boasts even more room! Redesigned rear seats provide more elbow room and fold flat for additional cargo area and an enlarged center door makes getting in and out much easier.

Underneath, the new LR3 is the first example of Land Rover’s new T5 platform strategy, which essentially lets many different body styles share the same chassis and thus, the same production facilities. As nothing in car-dom these days may go without a marketing badge, Land Rover calls it Integrated Body-Frame, and claims that it will set a new standard in off-road performance without sacrificing any of the comfort or on-road refinement of the monocoque platform.

The new Discovery LR3 gets independent suspension all around and the more upmarket versions will even feature air suspension over coil spring suspension. Front-end looks, air suspension…and now, Terrain Response, another marketing term for Rover’s performance technology. Could this thing be any more like a Range Rover? Terrain Response is a highly-sophisticated new system designed to maximize both on-road composure and off-road capability. The driver simply sets the system to one of six terrain settings — dynamic, normal, grass/gravel/snow (for slippery conditions), sand, deep ruts and rocks. Terrain Response automatically adjusts ride height and manages all engine, driveline, suspension and braking functions appropriately for existing conditions. This remarkable new system is designed to make off-roading almost foolproof, which can be good or bad, depending…

And finally, the powerplant. Look for the Jaguar AJV8 to provide the go with 300bhp, 315 ft-lb 4.4L - a remarkably powerful engine that has been extensively modified to handle the rigors of, well, Rover drivers. There is enhanced dust and water-proofing, a revised air intake for wading across streams, and revisions to the oil and cooling systems to keep it running smoothly at extreme angles.

And as far as those “wacky” eyes go, the Discovery LR3 is actually debuting Adaptive Headlight Technology (there’s that marketing lingo again!) which actually swivels in the direction of travel, lighting your way as you turn. Pretty clever.

In fact, there is a lot of clever stuff on the new LR3; stuff that arguably launches it far beyond the competition. Which is important, as the new Land Rover Discovery is venturing into perhaps its toughest environment ever: the overcrowded, hyper-competitive and contentious mid-level sports utility marketplace. This LR3 model may be the best equipped ever to handle the challenge.

Shipping is excellent !!The parts are always the correct parts,

Very helpful having the correct parts . Super fast shipping and packages with care. Thanks I will be buying all of my range rover parts from you

You are the ultimate parts resource for Land Rovers in the US. Simple.

Found what I needed for a great price. Customer service rocks!

Quality land rover products available that are not available anywhere else.