News and New Photos of New Defender At Work in Kenya 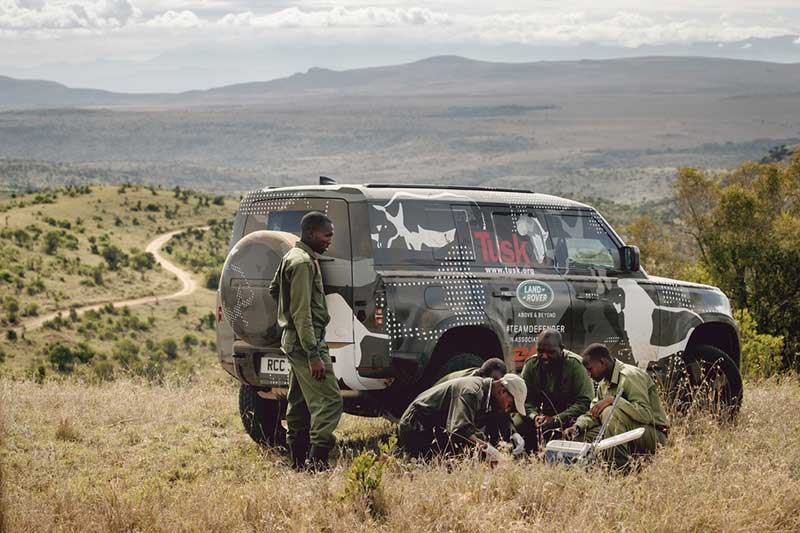 There are more official photos of the New Defender, after being used with Tusk, the African wildlife conservation charity, at Borana Conservancy in Kenya. Internationally-renowned wildlife photographer David Yarrow documented Tusk's 2019 "Year of the Lion" campaign from a Defender while at Borana. Also, the Defender has shed even more of its camo, and executives have leaked more information.

Land Rover and Tusk have had a partnership for 15 years, so combining that with the Defender's natural element in Africa, it was a great way to put the new Defender to a practical test. This year, Tusk is focusing on the lion, and the critical situation it finds itself in across Africa. There are fewer than 20,000 lions left in the wild across the globe -- there are more rhinos in the wild now than lions. A century ago, there were 200,000.

The Borana Conservancy in Kenya hosts several prides of lions, and part of Tusk's goal is to collar them so they can track their movements and activity. Of course, this means you have to find the lions on the 34,500-acre property, and they don't typically line the roads waiting for you to come in a regular car. Thus, the new Defender proved its worth bashing around the backcountry, seeking out the lions, acting as a shooting blind for the tranquilizer gun, and carrying tracking supplies. It also ran all sorts of other errands around the property. Borana also provides a semi-contained environment to protect the secrets of the not-so-secret new Defender.

In 1948, the earliest 80-inch Series I prototypes were tested in East Africa, so for the new Defender to be tested there as well brings the Land Rover brand full-circle.

At the same time, world-famous fine-art wildlife photographer David Yarrow was using the Defender at Borana to document the lion and the Defender. How does he view the Defender? 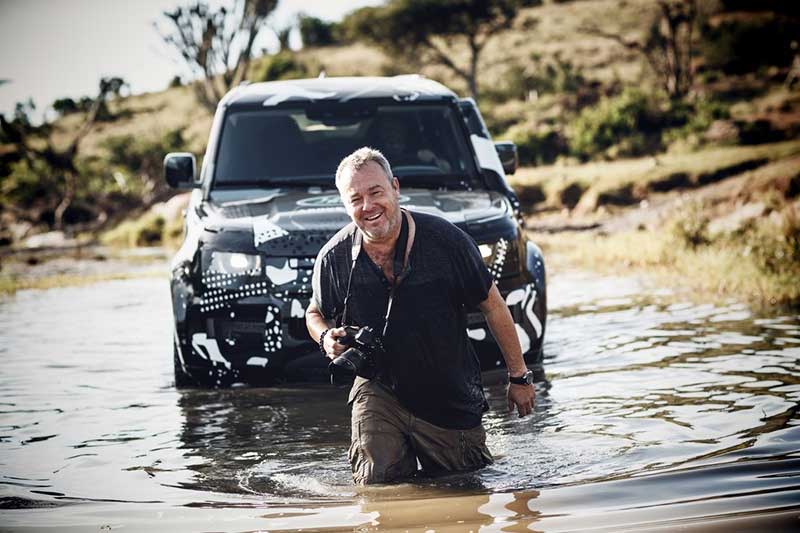 "There's an old saying that ships are safe in harbors, but ships aren't made for harbors, they're made to go to final extremes, and in the modern world you need cars that can take you to the final extremes." The Defender fits the bill.

As the Defender is wandering around Borana, it's doing so in a new custom vinyl wrap camouflage, similar to an earlier one for Tusk and one for the Invictus Games. Land Rover has been quietly revealing the vehicle panel by panel in every photoshoot, but you have to be eagle-eyed to track it. 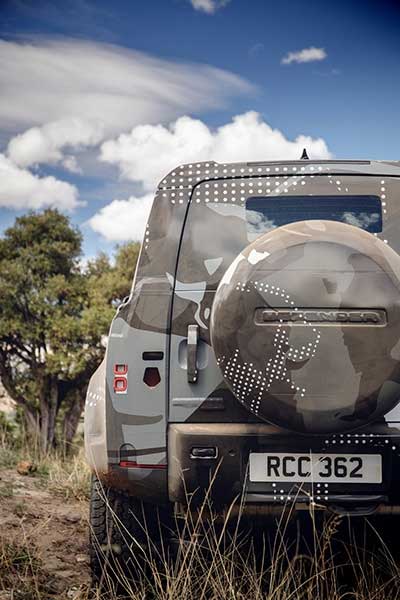 This time, we can almost wholly see the back profile, and it's very, very flat -- like the vehicle it's replacing. It seems we're now seeing the final shape of the rear door because the Land Rover and Defender badging can now be seen bulging under the camo vinyl wrap. You can also see that perhaps the most prominent design feature of the traditional Land Rover is still there -- the bulge in the fenders that's been in every model since the Series II. (It was added there to compensate for wider axles on that model compared to the Series I.)

We can see the roof profile now, too, and it also keeps with tradition. The front of it is sloped down, like old Defenders, but generally, it's flat. The window line looks just about perfectly straight, without any significant tapering, and the window apertures seem to have the same rounded corners of an old Defender station wagon. 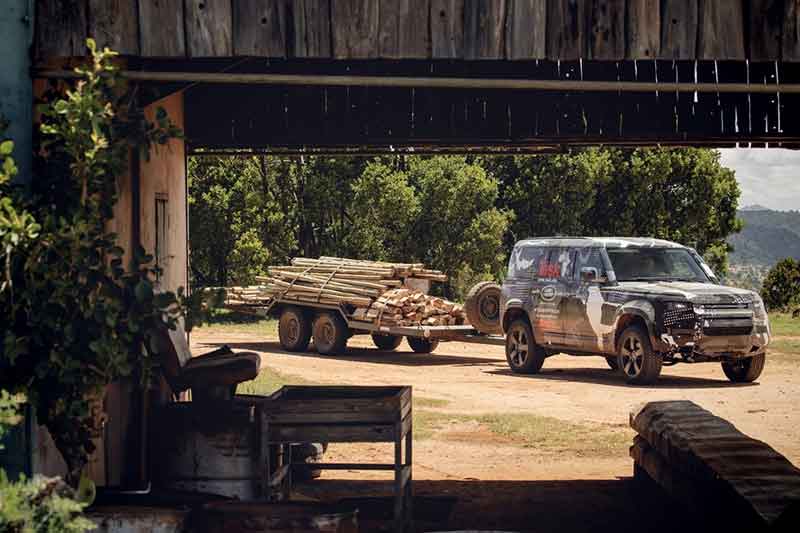 The front remains a bit of a mystery, but the headlights are now uncovered enough to see that in some way, they're round. It looks like this may have been accomplished with circular LED daytime running lights (DRLs), but it looks like the Defender is not carrying over the same DRL pattern as the Range Rover and Discovery, both derived over 16 years from the 2003 Range Rover. They're under large rectangular covers, but whether these covers are part of the final design or are removable camo is yet to be seen. 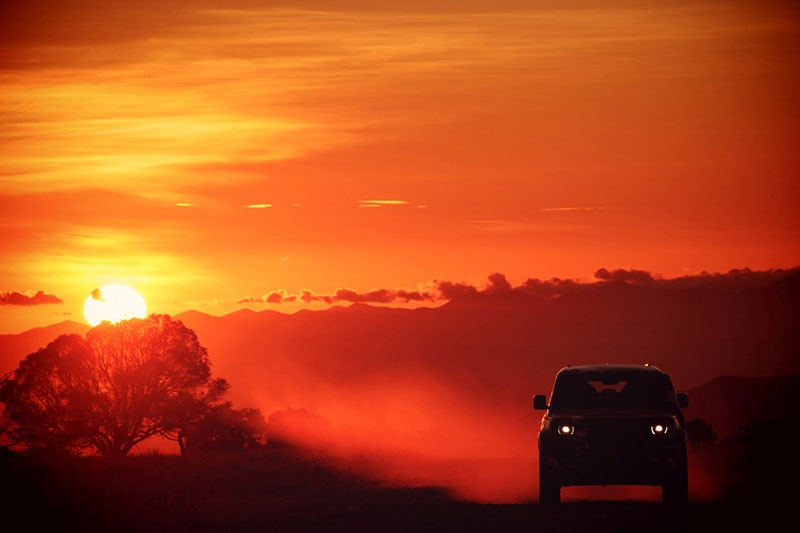 The bonnet is now largely unwrapped, and you can see "DEFENDER" peeking out under the vinyl on the leading edge there, as well. It has a bump in the middle reminiscent of the bulge in the 2007-2016 "Puma" Defenders, and it's possible it retains more or less the same shape and proportions of the old Defender’s bonnet, instead of extending across the width of the truck.

In an interview with Motoring magazine in Australia, Land Rover's Australian boss Mark Cameron commented on the upcoming range. Yes, range -- there will be lots of different Defenders over time. The goal is that this is a high-volume vehicle, and to do that requires selling it across the cost and function spectrum. We know of a 4-door long-wheelbase station wagon and a 2-door short-wheelbase hard top so far; there's more to come, it seems.

Land Rover seems to be looking at Toyota's international Land Cruiser range, which has more models than the single, $80,000+ Land Cruiser on sale here. Land Rover's goal is that the Defender can capture that same wide market, filling in the gaps in their lineup with a single, flexible model.

Land Rover wants to cater the Defender nameplate to a wide variety of buyers, from a (slightly upscale) working-specification vehicle to a fully-trimmed luxury vehicle that will go against Mercedes Benz's new six-figure G-Wagen. Expect the Special Vehicle Operations (SVO) department to get involved pretty quick once the Defender hits the road.

There are just three months until the rumored reveal at the Frankfurt Motor Show in September. Look for the leaks and interviews and rumors to come more and more hot and heavy until then.