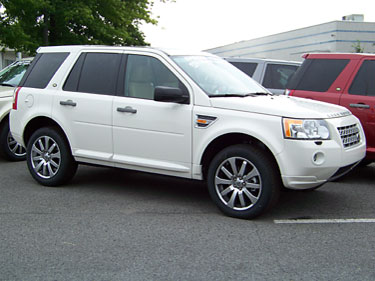 We are sourcing a full line of LR2 parts and accessories.

The LR2 is the much-anticipated heir of the Freelander, which ended production in the U.S. in 2005. Referred to as the Freelander 2 in Europe and abroad, it dons the moniker LR2 here in North America (much like its larger cousin; the LR3 - which still carries the heritage name 'Discovery' elsewhere in the world).

The LR2 L359 is Land Rover’s value-priced model pegged to compete with other compact luxury SUVs like the Acura RDX and Lincoln MKX. But, like any Rover, the LR2 provides additional serious off-road capabilities that competitor models are hard-pressed to match.

Many will be surprised by the LR2’s 230-hp 3.2-liter inline six-cylinder engine that powers the SUV into a completely separate class than its slighter predecessor, the Freelander.

All told, the LR2 / Freelander 2 is an exciting new addition to the Land Rover family. And outfitting your LR2 is where we come in.

Look to Atlantic British for an ever-expanding line of quality LR2 parts and accessories and premium upgrades for your Land Rover.