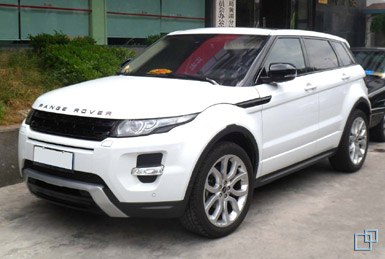 Turn to Atlantic British for a Growing Line of Range Rover Evoque Parts and Accessories.

2011 will go down in Land Rover history as the year of the Range Rover Evoque. In its first few months of production, Rover's first ever compact crossover SUV compiled over 50 of the industry's most prestigious awards for automotive excellence. The Evoque's success can be attributed to the vehicle's innovative design, improved fuel economy and smaller size, making it an attractive choice for a growing urban market.

The Range Rover Evoque L538 uses a unibody construction that enhances the vehicle's handling and ride quality, making the Evoque more athletic than its larger body on frame siblings (see LR3, LR4, Range Rover, Discovery Series II, etc.). The Evoque is powered by a 2.0-liter, four-cylinder turbocharged engine that produces 240 horsepower and 251 lb-ft of torque and is matched to a 6-speed automatic transmission. The Evoque's engine is the smallest in the Land Rover fleet, but capable of propelling the 3,700-lb crossover to 60 mph in under 7 seconds. The Evoque's small engine and reduced weight combine to provide the vehicle with impressive fuel economy - 19 mpg city and 28 mpg highway - the best figures ever for a Range Rover.